For Yusef Austin the idea of building, assembling, creating has been second nature since he toyed with model airplanes as a kid. Now known as The Cocktail Architect and the director of the cocktail program for BR Guest Restaurants, including Blue Water Grill where we met with him to preview his newest work premiering this Summer. 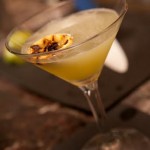 Though he thought early on acting was his calling, Yuself found himself bartending as a day job that soon turned into a career path. A self-proclaimed “hippie kid” who moved to New York nearly two decades ago – he was following the Grateful Dead and living in San Francisco – he decided he wanted to be a “rock star mixologist” and so he has become with a winning smile and a positive attitude that never quits engaging and charming those around him. Married to a serene and beautiful English woman from Mauritius (an island nation in the Indian Ocean off the southeast coast of  Africa) and now the proud father of a baby boy, he lives “halfway to Coney Island” but the fun doesn’t stop there: He’s decorated his son’s room with pictures of Jerry Garcia and Keith Richards.  His son by the way is aptly named Revel Morrisey Austin, homage to iconic indie music legend Morrisey who has in Yusef one truly devoted and passionate fan.

Crediting Cocktail King Dale and his son, the Cocktail Prince, Leo De Groff, as instrumental in helping him develop his own unique and natural vision, Yusef gradually took ownership of his role as a cocktail architect.  After all, you could say drinks are like a building, there is a foundation (a specific spirit – Vodka or Tequila, for example) and as one progresses, elements are continuously added until it is complete: a perfect harmony.

Yet for this master builder there’s always a signature whimsical element, the finishing touch of an imaginative garnish that’s visually striking because, says Yusef, “I am turned on by what I see.” Even the shape of ice cubes is relevant to his constructions. Especially enjoyed by those who encounter Yusef at private events conceived by mentor extraordinaire, world renowned event designer Colin Cowie. 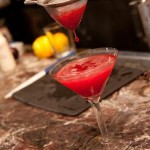 Though the twinkle in his eye reveals just how much fun he has behind the bar, Yusef isn’t always dressed to mix; rather he loves this era’s take on power dressing, sleek suits are an indulgence from Barney’s he reveals…a change of pace you could say for a rock’n roller who admires the surrealist art of Salvador Dali and looks at life as full of artistic opportunities: “I am all about taking advantage of every visual cue…design, symmetry, sound, the look of the glass, the color of the cocktail, how it is presented and how it looks when you are drinking it. But I believe in using what’s accessible, artisanal spirits for sure but nothing so out of reach that it might be untouchable or unobtainable.”

For this Master Builder then every cocktail is a magical adventure, a Rock’n Roll journey, balancing natural elements like fresh herbs (Purple Basil garnishes one masterful creation) with a strong but equally organic aesthetic…when it comes back to basics, it’s about a vision all his own.  After all, Yusef Austin builds drinks with a foundation that’s his alone – at the end of the day, that’s how he’s earned his title: The Cocktail Architect.

BLUE WATER GRILL will feature Yusef Austin’s innovatively constructed cocktails as Summer winds down and Fall begins.  Stop by this breezy Union Square location to enjoy what you could call his take on a Margarita, a cucumber citrus and Anejo Don Julio tequila refresher called Afternoon Tea. This cooling pick me up is a personal favorite – I love, love, love the barely there sweetness and the sprinkle of Keffir Lime dust on the top gives this cocktail a rare essence – not to mention one zesty kick. Deep red Hibiscus, succulent and delicious, is the foundation for Good Morning Mexico where black peppercorn adds a deep spiciness but blood orange juice blended with red wine brings the idea of Sangria to mind; though this cocktail is a far more sensual experience. Green apple is the base for Your Elders Martini made from fresh apple puree for just that wonderful sweet tart sensation. A touch of St. Germain Elderflower Liqueur adds to the subtle elegance of this cocktail. Other BR Guest Restaurants will also feature Yusef’s cocktails, check out: www.brguesthospitality.com.