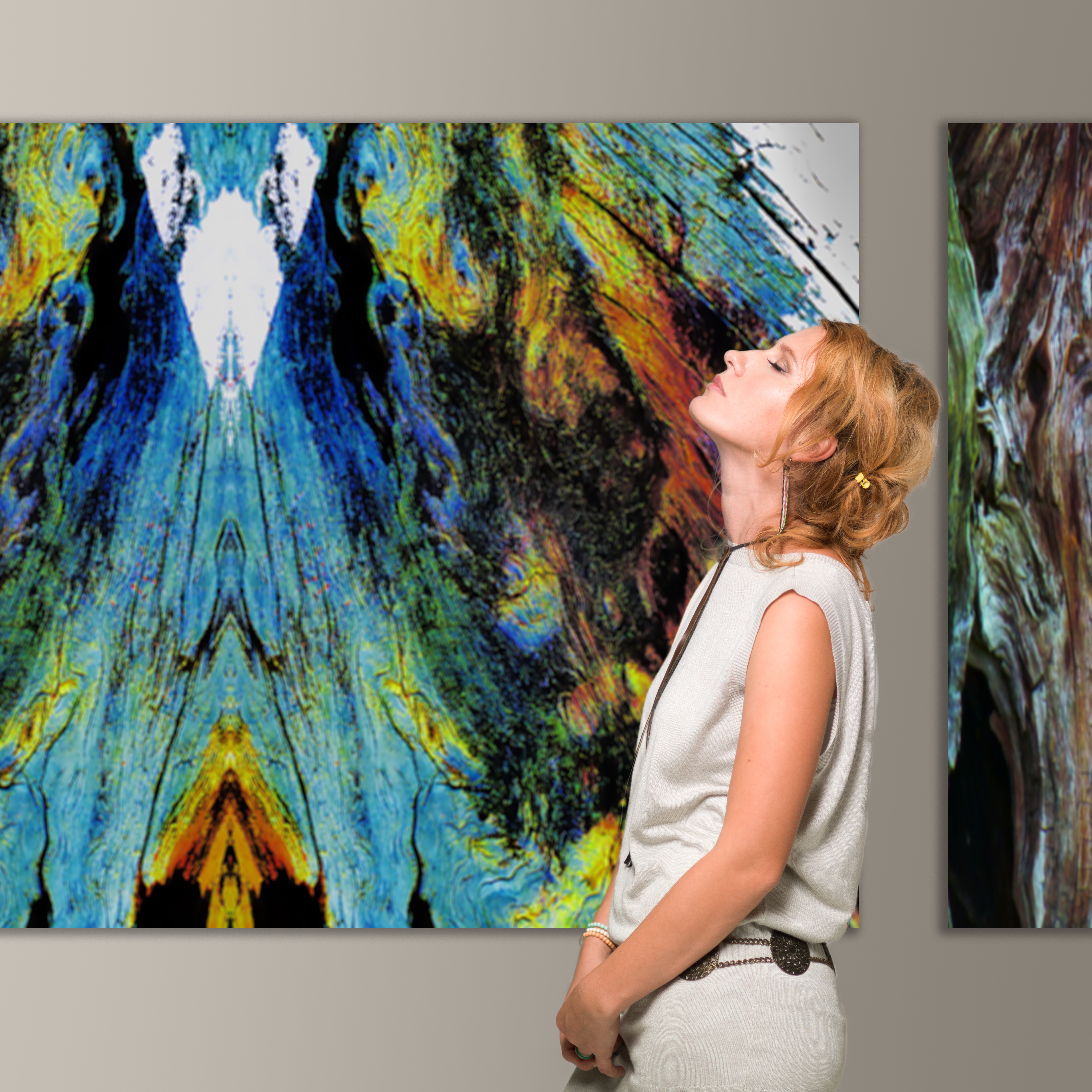 In The Beginning premieres at Red Dot Art Fair in Miami during Art Basel. You will find the piece on exhibit starting December 2 with Karyn Mannix Contemporary.

Spiritual journeys often find us unexpectedly; a visual trigger shoots memories and recognition to the surface as we reach back to move forward.  And so it was for fine art photographer Ted Barkhorn when he discovered what he calls “anomalies in nature.” These visual deviations from expected forms invited his mind to travel to a place where what he saw was natural, mystical, and spiritual, an experience that fits the definition of pareidolia, our perception of a specific and potentially, meaningful, image in a random or ambiguous visual pattern.

According to Barkhorn, “Discovering pareidolia (seeing human or animal forms in an abstract pattern)  in my photography began when I happened upon inverted Redwood roots during a hiking expedition. Brutally harvested long ago in the Pacific Northwest, these majestic forms were gnarled and twisted. I found their presence distinguished yet disturbing. They surprised me when I came upon them in an accessible destination a caring “friend” had created to honor their lost majesty.  Intuitively I felt an element of pathos and so I began to photograph them.” Three years went by, the images remained hidden away, ignored like an empty suitcase after a trip.  But a critical business venture demanded that he create a portfolio. As he did, he saw his work with fresh eyes: the outline of the Virgin Mary suddenly became apparent in a photo that appears to replicate in nature Michelangelo’s Pietà.

“On further study it appeared to me – and to others who saw the work – that the photo of the wood form, the twisted root, conveyed Jesus released from the cross, held in the arms of his Mother,” Barkhorn explains. This discovery started him down a road less traveled, a voyage of spiritual discovery deeply rooted in his connection to the natural world.  Photographing these extraordinary wooden forms became for him an organic process; he observed the spiritual intertwined with the natural.  “Each image I experienced in nature,” he shares, “revealed itself in the camera as a visual representation of spirituality, bringing to mind passages from the Bible and sage commentary from philosophers, authors, and leaders, inspiring voices, whose thoughts parallel my own.”

My photography does not reference only the present however, like stained glass windows it draws people in. “I seek to take viewers on a spiritual journey as faith and art come together,” Barkhorn reveals. “The images of the roots are as discovered in nature; though color may be sometimes be added to bring forward a pattern representing a spiritual touchstone, Samson’s locks for instance or the Leviathan. My goal is always to keep the images genuinely true to nature.”  Indeed, as Henry David Thoreau has said, “It’s not what you look at that matters, it’s what you see.”  Each image is Barkhorn’s perception of travels to a spiritual realm. Every frame is a voyage into the inner sanctums of the imagination. 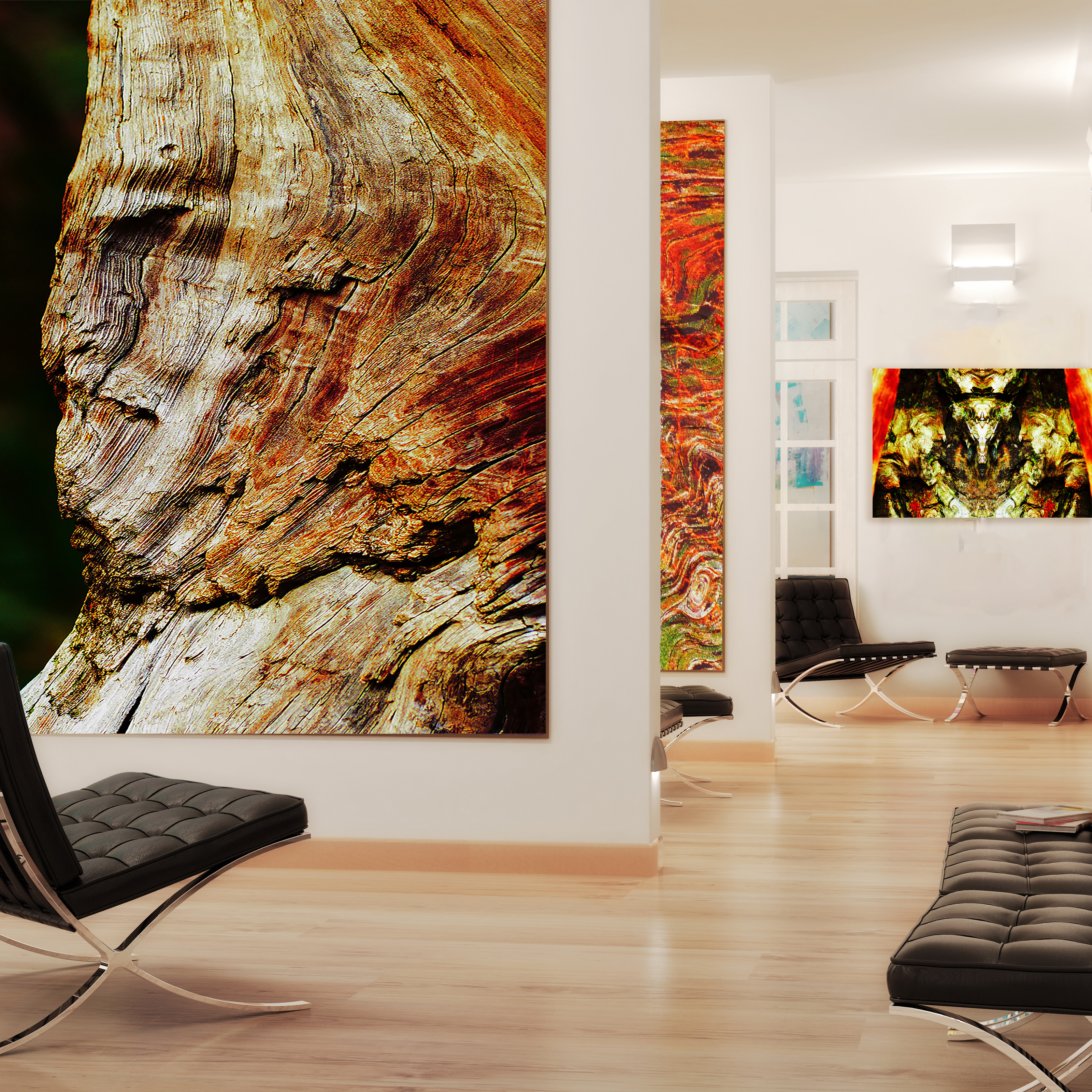 Ted Barkhorn will premiere In The Beginning, a heavenly work in a range of blues full of hidden meaning, at Art Basel. Find this fine art photography in Karyn Mannix Contemporary at Red Dot Art Fair in Miami. And it will have a digital premiere in NYC at the invitation only ArtHouse event on December 2 as well.

On January 28, 2019 MILLENNIUM MAGAZINE guests will be invited to attend an exclusive preview of Ted Barkhorn’s pareidolia photographs, Modern Images of The Natural World on at Novo Arts in downtown NYC. The exhibition will be on until February 6, 2019. Follow us on Instagram to learn details of this extraordinary evening.

Come enjoy cocktails and fine art photography to bring in the New Year! Invitations coming soon, so save the date.

– Lori Zelenko Contributed to this story.

Art Is What You Make It

MILLENNIUM MAGAZINE CELEBRATES 'THE ART OF GIFTING' IN GREENWICH