Millennium Magazine Spokesmodel Anna Demidova is used to making moves on the dance floor as professional ballroom dancer and former ABC TV ‘Dancing with the Stars’ contestant, but for the first time ever she found herself twirling over skyscrapers during a Wings Air Helicopters tour.

“This was my first time flying in a helicopter. I was a little bit scared, but everyone at Wings Air and our pilot were so nice, he explained what happens during the flight, showed us the different types of helicopters and the route he would take us.” said Anna. “I have to be honest it was one of the best things I’ve ever done. It was an amazing experience.”

Brett Marks, Chief Flight Instructor for Wings Air was at the controls of a Eurocopter AS350 when Anna lifted off the tarmac from Westchester County Airport on a gorgeous sunny summer day. With clear blue skies, sights from the cockpit offered up uninterrupted views of the New York Metropolitan Area for as far as the eye could see.

A bird’s eye of the city took Anna over Yankee Stadium, the Empire State Building, One World Trade Center and the Statue of Liberty.

“I see this city every day, but not like this!” said Anna. “The view was absolutely breathtaking. I felt like I could touch the tip of the Empire State Building. I didn’t want this flight to end.”

The non-stop excitement was just 30 minutes.

“I’m certainly going to do it again myself,” said Anna. “Doesn’t matter if you’re a New Yorker or a tourist, you will have an amazing experience.” 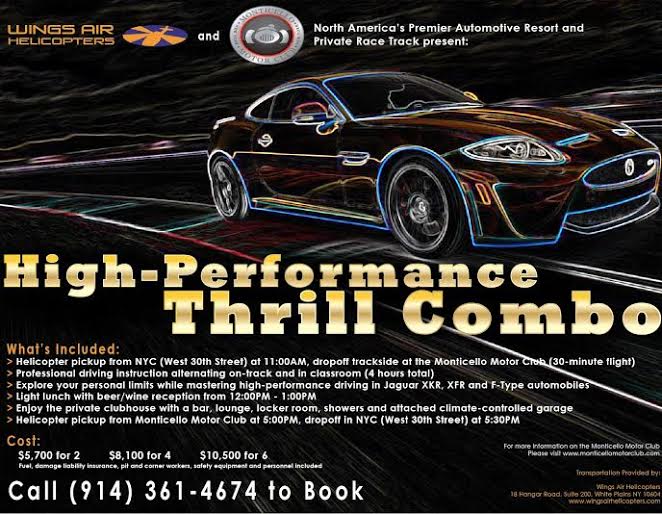 Why wait in 3-hour traffic on the Long Island Expressway to the Hamptons when a flight with Wings Air Helicopters will get you there in a fraction of the time.

Wings Air Helicopters was founded by former investment banker Javier Diaz in 2002. As an experienced pilot Javier wanted to create a company would stand above the rest and meet aviation needs for the sheer pleasure and beauty of airborne travel. Wings Air Helicopters was the first helicopter company to be based out of Westchester County Airport (KHPN) in White Plains, NY. Committed to customer satisfaction, safety and the highest quality of service, their fleet includes top-of-the-line charter and training helicopters, currently flying an average of 3,500 hours per year without incident.

Their team of experts can assist with wide a variety of aviation needs–from aerial photography and film production to flight training and scenic tours. Wings Air also is the Official Helicopter Partner of the Monticello Motor Club, offering direct flights to the racetrack as well as introductory driving packages. They also offer commuter packages, scenic tours, flight training and aerial cinematography services.

For booking or more information call 888.489.6524 or visit www.helicopterny.com.

Anna Demidova at The Voice Radio