It is just not “Awards Season” without the fashion parade of new products we locals know as the “Luxury Lounge” or “Gifting Suite,” whether VIPs think of it as trick-or-treating for celebrities or an early preview of Christmas shopping. For the hopeful companies coming in to get word out to celebrities on their next-big-things, it’s a chance for them to gain a sort of stardom. In some ways, these parties were “Shark Tank” years before that program existed, with celebrity judges getting to try and test. Though the events are a bit more spare than their heyday a decade ago, there are still some inventors who may become stars in their own right.

The Annual Style Lounge & Party in Celebration of the 2017 Emmy® Season was back to raise funds and awareness for the Wednesday’s Child (www.foxla.com/wednesdays-child) in Los Angeles, provide a delicious Mediterranean lunch at gathering place Fig & Olive, and send celebrities and Hollywood influencers home with a bevy of fun and useful products for themselves, their kids, and their four-legged friends. Buywine.com provided a suitable toast for the guests with excellent Spanish rose, dessert wines, and fine white and reds from California and international wineries. 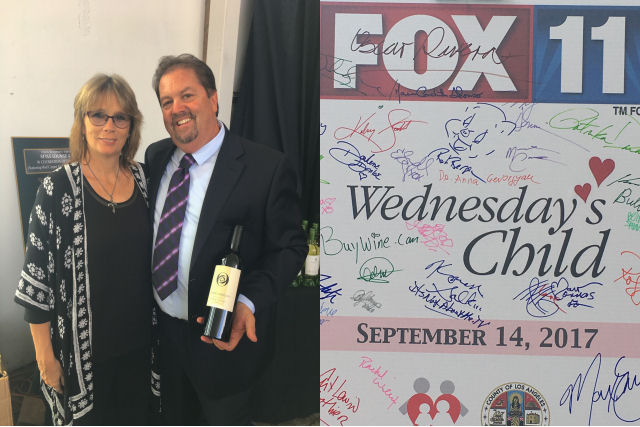 Stalwarts of this suite included Twisted Silver (twisted-silver.com), Single Dress/Kaya di Koko (kayadikoko.com), My Saint My Hero (mysaintmyhero.com), Art Lewin Bespoke Tailoring (artlewinbespoke.com), and Sue Wong (suewong.com), were in fine form presenting some nice twists on their classic offerings. At Twisted Silver, we learned chokers were trending for women, while men’s fashion was becoming a touch more daring with longer chains. Even with some flights of fancy, some companies, such as Signature, kept things down to earth with their sensible sportswear for men. 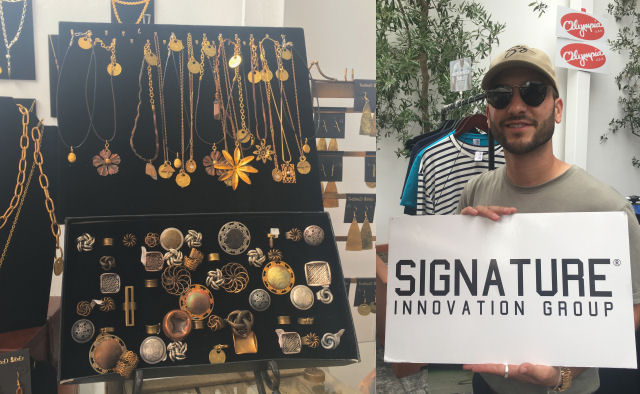 Some of the most exciting news about forthcoming projects came directly from Sue Wong. While the L.A.-based evening wear designer’s collections – which recall Hollywood’s golden age from the 1920s through the 1950–never goes out of style, we were excited to hear about her plans for her expansion into “lifestyle,” which encompasses a new home collection and a hotel that will open in Downtown Los Angeles.

Like Sue Wong, the Fig & Olive meal was made up of enduring favorites with a few subtle new twists (including a salad with seasonal green apples). However, there were some enjoyable things on the side, including honest-to-goodness Red Velvet cake from Food Network star Chef Elliott (chefelliott.com), ready to go cocktails from Spa Girl in cucumber and pear, fire-breathing condiments from Burger Time, with Hint Water nearby to put the fire out deliciously. Speaking of burn quenching, Hint had something pretty cool on hand—fruit scented SPF 30 sunscreens. 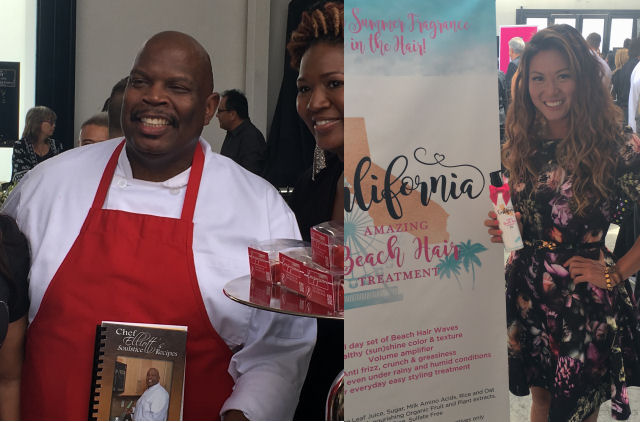 Another beachy addition to the party included Curlifornia and Hair Swell (mycurlifornia.com) styling sprays for men and women, designed to achieve that windblown look with sugar instead of drying salt. While Olympia USA (olympiausa.com) sent guests home with perfectly practical wheeled backpacks, CJ’s Pet Staycation (cjspetstaycation.co) put together the perfect care packages for dogs with an adorable duffle bag packed to the rafters with treat jars, bowls, blankets, toys, and other supplies.

Although The Millennium Biltmore hotel is in downtown Los Angeles, it is no surprise that Celebrity Connected selected its grand ballrooms for their pre-Emmy festivities. The chandeliers, carpeting, and ornately painted ceilings evoke the grand movie premieres of almost a century ago. On the other hand, contemporary practicality and (mostly) healthy lifestyle choices made that Old Hollywood glamour a bit of an afterthought.

After going through the red carpet gauntlet (admittedly tamer and more laid back than the one preceding the Emmy broadcast ceremony) , celebrity guests were greeted with his-and-hers beauty care packages from Taiwanese-made Dekke Hud Skincare (dekkehud.com) for men and STARE Cosmetics (starecosmetics.com), which clearly has ambitions with its presentation and packaging to be the next M.A.C. A sharp turn to the right took guests to Svakom (svakom.net), purveyors of racy “intelligent intimate lifestyle products” with a brand rep who could not help but put a smile on one’s face if the “toys” did not already do that. 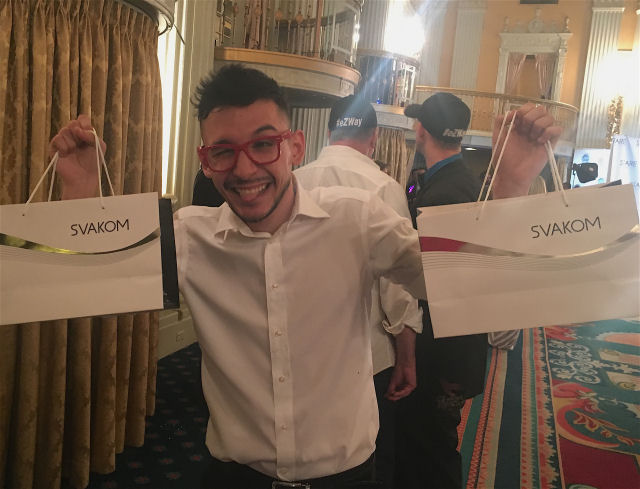 Cyndie Wade (CyndieWade.com) was a show-stopper with her hand-painted glassware adorned with our favorite stars. BuzzPop Cocktails (buzzpopcocktails.com) rounded things out with refreshing adult popsicles that may soon make its way to better hotel pool decks, while NaiaVibes (NaiaVibes.com) offered perfect totes and tees for beach visits. 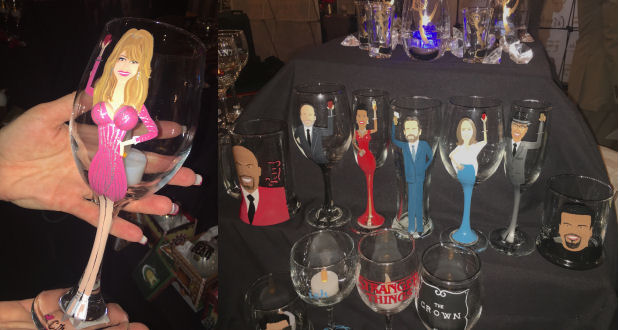 A turn to the left again, and beyond a quick sugar fix at Justin’s nut butters, you were in the land of products that truly were new and different. Mad Hops’s beer flavor drops promised the transformation of bland commercial beer into craft brew refreshment. Master perfumer Sue Philips (scenterprises.com) offered guests custom created perfumes based on their preferences of citrus, oriental, floral, or mineral blends. High Gorgeous (highgorgeous.com) offered its cannabis-based beauty products in beachy and bright packaging. The line includes potions for cellulite, showers, body butters, and light body lotions that also calms arthritis and certain skin irritations. 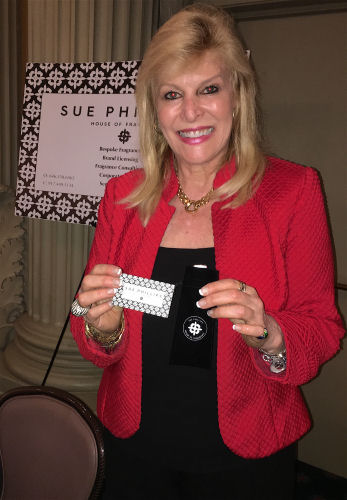 North Carolina-based WeWool (wewool.org), founded by Matt Syracusa, not only crafts beautiful and cozy socks for hiking and the corporate jungle from merino wool, but also donates a pair of socks to people in need for every pair sold. Syracusa came up with the idea when running a breakfast outreach ministry and realized how a sturdy and soft pair of socks could make a difference in the recipient’s life during New England Winters. 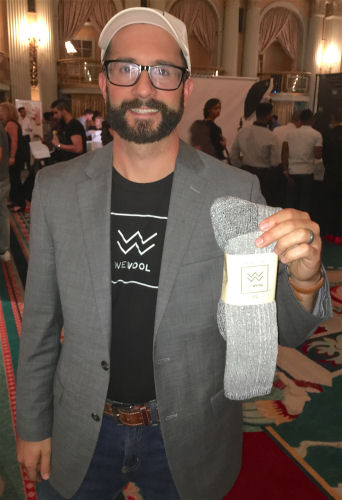 We also found ourselves cheering for the inventors of A Good Cycle (AGoodCycle.com) and the Restroom Kit (http://www.TheRestroomKit.com), not only because they created things that address a very buggy problem everyone deals with (bacteria!), but also had fun with addressing necessary products in entertaining ways. While A Good Cycle is behind SaniFani, a disposable seat cover for spinning and rental bikes, The Restroom Kit ensures users are prepared for any sort of emergency anywhere in the world, be it India or Indiana.

Although the Secret Room’s 2017 Emmy lounge was built on an intimate scale, Amy Boatwright, one half of the dynamic duo behind The Secret Room pre-award show lounges, was not going to allow any sad event—natural or otherwise—rain on her parade in bringing additional joy into the Emmy Season.

“After doing these events for the past ten years, the experience of doing these gets better and better because we’re the only lounge that also offers a full complement of beauty services,” said Boatwright. “However, this is the first year we’re also offering grooming services for men. We’re also proud to have Wolfgang Puck be a part of this event, and we’re the only gift lounge that does. We also strive to have a variety of things for babies and kids, tech and sports items for men, accessories for women, and just being well-rounded.” 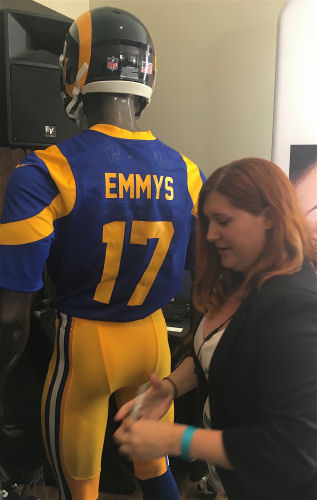 The gathering, staged at the InterContinental Century City in the Glass Lounge and adjoining courtyard, was a relaxed affair that tapped into some of the more exciting things happening in Los Angeles, including the return of the Los Angeles Rams football team and the release of a forthcoming “My Little Pony” theatrical feature film featuring the vocal talents of Sia, Emily Blunt, Kristin Chenoweth, and Zoe Saldana. However, not everything was about 80s nostalgia and sports hero worship.

As guests sipped on brewed-to-order Wolfgang Puck coffee and fueled up on snacks, they enjoyed beauty or grooming services from Toni and Guy (toniguy.com), and got the scoop on newer beauty lines such as vegan and environmentally friendly (and decadently feminine) LimeCrime (limecrime.com) from Los Angeles, Clarins’ new Double Serum (clarinsusa.com), and Freeze Frame (freeze-frame.com) from Australia. 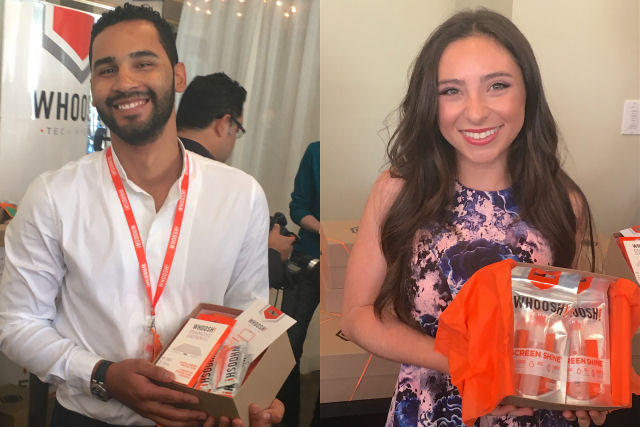 In the technology realm, Canadian firm Whoosh (whoosh.com) introduced guests to the concept of phone hygene with its full range of non-toxic cell phone, tablet and computer screen cleansers and accessories, including anti-microbial emoji print cloths and Diamond Defense liquid screen protection. Like the stars at the suite, its Toronto-based creators Jason Greenspan and Stefan Thorainson, made a splash on television. It was a winning product on CBC’s “Dragon’s Den,” the Canadian counterpart of “Shark Tank.” A company called Austlen Baby Strollers (austlen.com), debuted what may be the Lamborghini of prams.

0
Millennium Magazine September 1, 2017
No Comments Yet