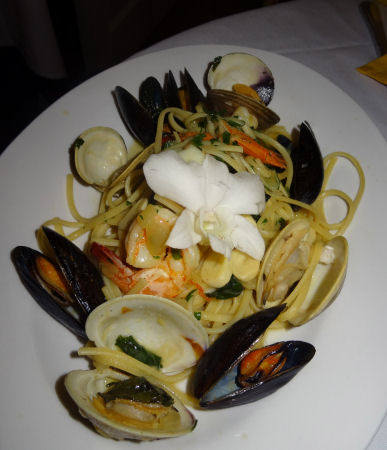 The freshest of Fresh Seafood Pasta Aoli created by Chef Marco Barilla at his new Manna restaurant in Watermill, NY.

In the former space of Mirko’s, a place your parents would have gone (your serious foodie parents) is Manna, a newish restaurant with a young vibe. Their “random” entertainment nights, which can happen any time from Thursdays through Saturdays, bring all sorts of talent to the al fresco courtyard. It’s a happening table-hopping Thursday the night we arrive. First we are regaled by a series of songbirds coached by a well-known celebrity voice coach, Samantha Cole, who, we’re told, preps singers for such shows as The Voice. Then she grabs the mic and impresses the diners with her sultry tones. Later a singer with a sublimely varied repertoire – from vintage Al Green to John Mayer – gives each song a reggae spin.

We’re seated at a four top under an awning in an outside nook with lattice panels and retro Italianesque décor seemingly from the Dean Martin era – think urns and a bas relief of Venus de Milo. 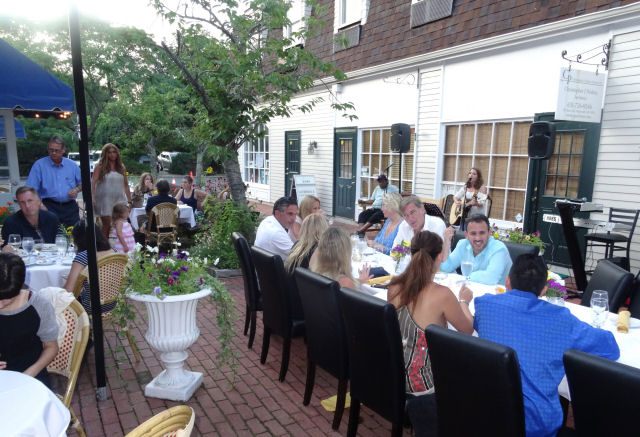 We sample the Manna Lotus, an herbaceous cocktail of gin spiked with St. Germain and a splash of hibiscus syrup, and garnished with a maraschino cherry cleverly swathed in a candied hibiscus flower. To accompany dinner we bypassed the ubiquitous Wolffer Estate and Whispering Angel and opted for a superb Italian rose.

The kitchen is the domain of chef-owner Marco Barrila, a Sicilian who not only apprenticed with local butchers and bakers, but also at his grandmother’s trattoria, which dates to the 19th century – before his formal training. While much influenced by his Italian roots, the chef describes his fare as “modern European.” 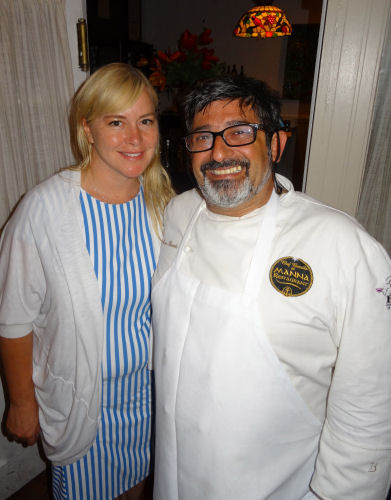 The bread service made us swoon: the bread itself sporting an earthy crust encasing a fluffy interior. Then there was the trio of spreads: garlic-scented green Sicilian olives, light as air sheep’s ricotta, and a sweet-tangy sundried tomato puree.

Our branzino was butterflied, artfully charred on the grill and served head on, but deboned. The lobster roll was a refreshing take on the traditional – wrapped in a lettuce leaf instead of a hotdog bun – and punctuated by dabs of pesto. China meets Italy in the crispy duck roll, enlivened with a bright herb sauce. The creaminess of the gnocchi with gorgonzola sauce was offset by the crunch of walnut bits. The lobster risotto was given a flavor boost with a healthy dose of saffron. And the braised short rib pappardelle was given a heavy Sicilian tomato-y flourish. 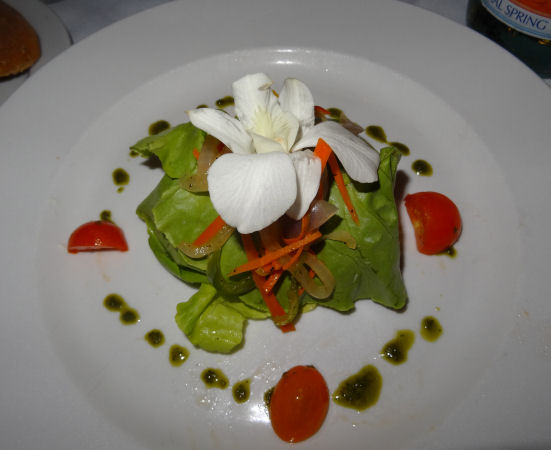 All dishes were garnished with a gardenia blossom, a signature of the chef who dressed his plates with flowers or herbs in season – chive flowers, pansies, micro basil or cilantro. Chef Barilla, who began his Stateside career at such eateries as Café Fiorello, near Lincoln Center, is in love with the East End and its fresh ingredients from farm and sea that “taste so good you don’t need to add much,” he says. “I feel like I’m in my habitat.”

Cooling Out With Cool J