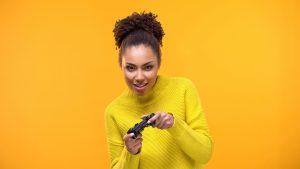 The so-called ‘classic’ video games of yesteryear share little in common with the huge A-list titles of today. The 2D simplicity of Pong or Tetris has been eclipsed by lifelike graphics and complex, multifaceted gameplay.

Since gaming consoles became accessible and present in the majority of homes, the videogame industry has grown exponentially. Companies invest millions in developing technology to advance graphics and usher in a new era of gaming with ground-breaking mechanics.

Gaming is now so inscribed in pop culture that videogame franchises are recognisable even to those uninterested in the industry.

Even the PC, integral to working from home and with many practical uses, became a key medium for playing games. The widespread availability of the internet gave birth to online gaming, with many games available for free using a web browser.

The monumental rise of the gaming industry was undoubtedly catalysed by millennials, who passed their love of gaming onto their children. It was during the millennial era that some of the first videogame franchises saw their inception, such as Mario and Sonic.

As well as inheriting their love of gaming, children born to millennials also inherited technological competence, adapting well to new tech. Even though many modern games are augmented by recent technological innovations, modern gamers still find playing them relatively straightforward.

The most recent example of this is VR and AR, which use headsets to alter the physical world surrounding the player. These technological landmarks have been not only used in conventional videogames but encompass all aspects of gaming.

Casino gaming is a prime example of this, with modern technology facilitating a more authentic and interactive casino experience. Playing online now captures the fun, social and competitive elements of land-based casinos, with an abundance of options for new players. Newly launched casino operators and well-established providers are including live casino games into their game offering, taking advantage of newly developed technology and mirroring a similar experience to that of a land-based casino.

A popular suggestion for the future of gaming is the further evolution of the infant metaverse. The metaverse describes a theoretical online world characterised by interconnectivity between players in the world of virtual reality.

Similarly to how the internet enhanced the capabilities of most technology, the capacity of videogames also saw a huge boost. Previously restricted by one-device multiplayer, the proliferation of internet access added a competitive online multiplayer factor to the gaming industry.

The popularity of online play induced Xbox live, pitting Xbox players against each other and pioneering multiplayer voice chat. PlayStation followed suit beginning the ‘console wars’, describing a fierce competition with each company introducing new technology and titles to outsell the other.

Xbox released Kinect, a camera and sensor extension that allowed players to use their body movements to play unique titles. Similarly, PlayStation had their own camera and ‘move’ controllers that facilitated similar, although they are now best suited to VR.

The Modern Impact of Gaming

The contemporary love of gaming kickstarted by millennials is so profound that companies are exploiting it in digital marketing campaigns. With gaming being such a devoted hobby for many, marketers recognise gaming as perfect medium through which to entice customers.

Many ad campaigns advertise using a playable game for added appeal. Even companies offering a product unrelated to gaming, such as KFC, are guilty of this.

Consequently, the love of gaming is only deepening with subsequent generations, and it currently ranks as the favourite pastime of most children. A recent Deloitte study aimed to quantify the world’s obsession with gaming and their investigation yielded some interesting results.

As expected, millennials and Gen Z are the most enthusiastic gamers, averaging around 11 and 13 weekly hours gaming respectively. However, Gen X, many of whom played on the very first consoles available, still amass around 10 hours a week.

Studies find that Gen X, and generations prior, prefer a more casual gaming experience. This usually means more of a focus on mobile games over the more complex and detailed games that are popular today.

Many games have developed cult like followings which has given rise to a number of conventions and expos. Millennial men are the most likely to attend such events, indicative of their deep passion for gaming which transcends a simple pastime. 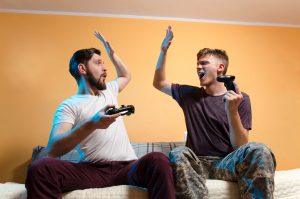 Classics in the 21st Century

For avid gamers, few things evoke a sense of nostalgia more than a classic videogame they played growing up.

Despite being decades old, many of the classic videogame franchises continue to see popularity through updated iterations. Games are updated to contemporary consoles and see graphical as well as gameplay improvements to maintain their appeal.

Mario Kart is a prime example of how classics have adapted. Diverting massively from the franchise’s platforming roots, this adaptation is a racing game that can be played in various ways.

Originally released on the Wii, motion control can be used to steer as well as conventional controllers. The newest entry, Mario Kart 8 released originally in 2014, has unshakeable popularity and is frequently amongst the best-selling titles yearly.

Gaming Wouldn’t be the Same Without Millennials

Without a doubt, it was the millennial generation that catapulted the gaming genre to the colossal heights seen today. It was amongst this generation that a deep passion for gaming began to develop that was subsequently passed to the next generation.

It was also during this era that there was an understand and appreciation of technology which has massively helped contemporary gamers. Without millennials perhaps video gaming would not have stood the test of time.

Three of the Best Realistic Fighting Games To Play Today