VR is still coming along gradually. We identified it as a top tech trend in 2020, but more than a year later, a majority of consumers still have little or nothing to do with it. While adoption may be slow, however, it is happening, and VR still figures to be pretty impactful moving forward — particularly in these areas….

Even if progress to this point has been disappointing, gradual improvement in technology (such as better VR and lower prices) will continue to bring about more focus on game development, as well as more consumer participation. VR won’t conquer gaming overnight, but in three years it stands to be a bigger part of the industry. Businesswire mentioned ben in a recent study that “the increasing applications of immersive technologies, such as virtual reality, augmented reality, and mixed reality, are anticipated to be a cornerstone in the gaming industry.”

Where specifically we’ll see VR in gaming is difficult to say. It could be that popular genres like that of the first-person shooter will really come alive in the category. Perhaps we’ll see sports games in the medium come along. Whatever the case though, we’re still betting on VR gaming being a big deal.

In addition to conventional gaming, VR has significant untapped potential to disrupt casinos. The only early examples of note — some VR poker games — are pretty good. Additionally, online casinos are already simulating their own versions of equipment-free virtual gaming. Various platforms have hosted dealer-driven card games for some time now, and the live games on Gala Casino demonstrate that the trend is spreading. On this particular platform, gamers can play roulette, blackjack, poker, dice, and even game shows, all through video feeds depicting game managers in real time. The experience appears destined for VR. 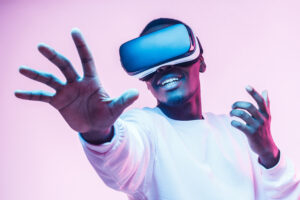 Gaming aside, social VR apps like Rec Room, BigScreen, VRChat, and AltSpace saw an increase in use over 2020, thanks to the lockdowns. And now with the news of Facebook rebranding as “Meta,” it looks like social VR is going to get a surge in popularity very soon. Indeed, Forbes tells us that Facebook (the current name) is not only already offering virtual reality headsets, but also has smart sunglasses (made together with RayBan) equipped with built-in cameras.

People will see VR merging social networks to present a new way to socialize. And with time, this will only expand into other forms of socialization: A bedridden or otherwise housebound relative able to see and talk to loved ones, for instance or a doctor checking in with a patient in recovery.

People of all ages have learned in the last year and-a-half that studying at home is a trying task. Long periods of time engaging in Zoom lectures and reading material online are no joke. In time though, as remote learning (presumably) remains common, VR and AR are going to help parents with this problem by offering a much better learning environment for home learning scenarios. As EFTTrends puts it, VR “could be used to enhance online learning and thus facilitate better delivery of education.”

While it seems that VR has been slow to “take over” the tech world, it is making progress. And in the coming years, we expect that progress to continue largely through these categories.

How To Find The Right Tenants

What Are The Fitness Trends For 2022?

Millennials and the Evolution of Video Gaming