Murr impressed his television audience with his writing skills and fans have been patiently waiting for more. Together with Wearmouth, they combined their literary talents for the follow-up to ‘Awakened’ that dives deeper to explain the history behind the monstrous creatures that terrorize and destroy anyone in their path. 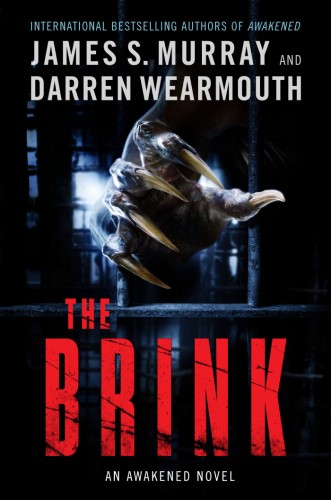 Murr who has a passion for horror and sci-fi is grateful to live out his literary dream:

“I’ve been a huge fan of science fiction and horror my entire life, and ‘Awakened’ draws inspiration from movies that scare the hell out of me like ‘Alien,’ ‘The Thing,’ ‘Event Horizon,’ and ‘The Descent.’ When I wrote the thriller, I wanted it to feel like an edge of your seat TV show or movie. It took over a year to finish and thirteen years to get published, and I’ve never been more passionate about a project in my life!”

“I’ve loved the experience of working with James. We clicked straight away through our mutual love of genre fiction, and I’m excited about the plans for the trilogy!”

In ‘The Brink’ we find the truth about the monsters that live beneath the Hudson River and the cover-up that threatens humanity.  The key characters from “Awakened’ return including former NYC Mayor Tom Cafferty who along with his team ruthlessly work to find how to save our planet from global destruction.

Loving to connect with their fans, Murr and Wearmouth are inviting you to be part of a one-of-a-kind book release event in NYC at the ‘THE BRINK LAUNCH PARTY’ on June 17th!

Murr and Wearmouth will be hosting a unique 2-hour book telethon in front of a live audience at Barnes & Noble – Union Square. The launch party will be live-streamed internationally on Instagram and Facebook, and feature surprise celebrity cameos and Murr taking phone calls directly from fans around the world!

Even more exciting, the event will end with a GRAND PRIZE sweepstakes! A winner will be randomly selected and receive roundtrip airfare and hotel for 2 people to fly to NYC for a night out on the town with Murr that includes dinner and a trip to Dave & Busters!

Now this is an event you don’t want to miss!

You can also watch the event live-stream online here:

How to Entertain Yourself in Your Downtime When Traveling