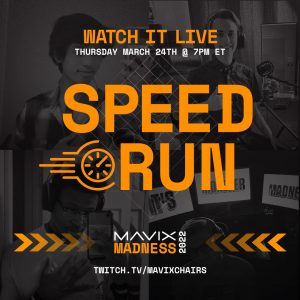 Mavix – breaking the mold of traditional gaming chairs – is currently holding its second annual bracket-style, gaming and lifestyle tournament, Mavix Madness, rollin’ now through April 7 (began on Feb. 28). From the jump, the Mavix team challenged gamers to share a video of “why you want to be the next #MavixMob member,” lead by none other than Valkyrae – the Mob is a dream team of gamers, esports athletes, crossover talent, and industry leaders to help tell the Mavix story. After combing through submissions, Mavix unveiled the Sweet 16 bracket of competitors, set to go head-to-head through a series of matchups using their gaming ability, content creativity and agility. 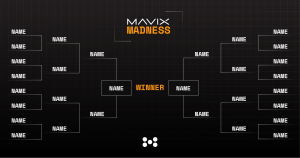 For those who want in on the action, keep up with Mavix Madness by visiting Mavix.com/MavixMadness and following Mavix on Twitch, Instagram and Twitter, as each platform will provide timely updates and round-by-round recaps – rounds and competition times are as follows:

Don’t be a bot, drop-in on Mavix’s Twitch channel, @MavixChairs, to watch Mavix livestreaming the competition in rounds three and four. Anyone watching and joining the grind during these rounds may win pop-up prizes, including gaming peripherals gift cards, Mavix Merch and new Mavix chairs.

After final deliberations and social media voting, the Mavix Madness winner will be announced via Mavix social channels and on Mavix.com. The winner will be dubbed the newest #MavixMob member and awarded the grand prize of a $2,000 GameStop shopping spree, weekend Getaway for 2 in any major US City and Mavix Limited Edition chair.

The Magic that is Orlando