Since her high profile relationship with boxer-turned-model Younes Bendjima came to an end, the Kardashian sister has remained under the radar. However, recent reports suggest that she and model/actor Luka Sabbat have been brewing a romantic relationship. 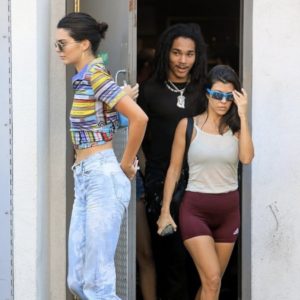 Introduced by sister Kendall Jenner, the two spent a weekend together in Chicago and while not officially appearing as a couple, the physical was chemistry tangible. Photos have been released showing Sabbat resting his hand on her lower back, and Kourtney gleaming while whispering in his ear.

There has been a trend of questionable age gap relationships in Hollywood as of late, with 31-year-old rapper Drake allegedly dating 18-year-old model Bella Harris. Even 35-year-old Scott Disick, the father of Kourtney’s three children, has been linked to Sofia Richie, who turned 20 this past summer.

Cardi B in Negotiation for Super Bowl Halftime Show Setlist