Noel Coward Play Bursts on to Broadway for the Spring Season

It’s lonely at the top…Tough to be a philandering celebrity whose social life consists of “lost my latch-key” ladies (a girl about town’s way of saying I want to hook up with you) staying the night. 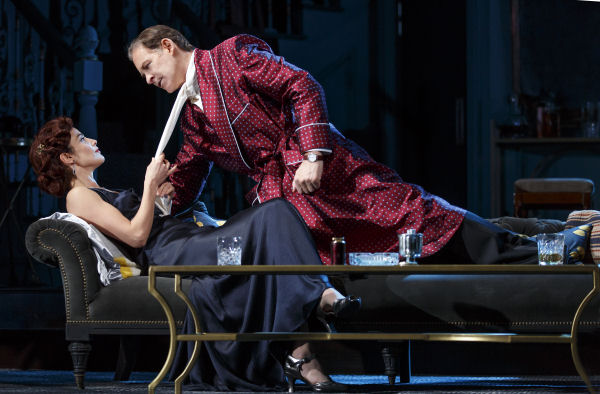 On Broadway at present, Kevin Kline (Academy Award and Tony Award winner) makes this ego-centric, over-acting, just about over-the-hill character into a man whose vulnerabilities appeal so tremendously that we can’t help but love him, indeed I’d lose my “latch key” for a night with him too. Great sex and no commitments may be a modern saying but it’s a tale as old as time. And a lifestyle this leading man embraced when the radio was playing Cole Porter instead of The Rolling Stones.

As the play’s slogan says, and the play is Noel Coward’s Present Laughter at the St. James Theatre on Broadway, “Onstage. Offstage. Never Upstaged.” Originally produced in 1939 the play spoke then to the changing times and disintegration of the privileged class at the onset of World War II…today it’s a light-hearted romp, a behind the scenes look at a still sexy leading man who’s searching for truth and beauty not to mention genuine companionship – after more than one glass of sherry. Think Cary Grant with a dose of neediness. Kevin Kline’s character rings true as his witty ways let him wrangle his way out from ladies lingering the morning after… his “caught in the act” activities are not so different from what we see among the headlines in the NY POST.

What’s brilliant is that Kevin Kline doesn’t just act the role – he becomes the role with extraordinary physicality, every gesture resonating with élan and behind that, a delightful balance of authority and pathos. The character comes to life through this actor’s perfectly-timed movement as much as through the elegant words of Noel Coward. The beauty of the physical expression from Kevin Kline makes the character devastatingly alive, so humorously grandiose he is empathetic – there’s no way not to root for him as his misbehavior comes to light. 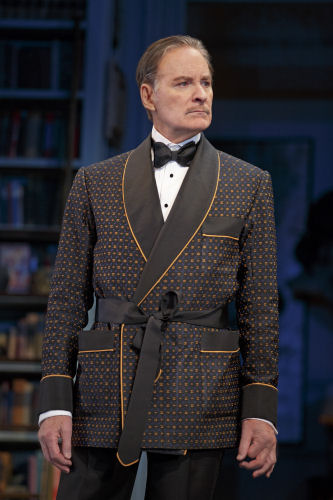 Women – young, beautiful ones – still throw themselves at Gary (Kevin Kline’s character is called Gary Essentine)…so he rationalizes why not take advantage? Do enjoy forbidden fruit as long as these lovely ladies invite themselves into his still-married life.

There’s no blaming Gary entirely for the way these beauteous babes effectively dispatched by Gary’s not quite ex-wife (they never bothered to get divorced) the three-time Tony® and Emmy® Award nominee Kate Burton (Scandal, Grey’s Anatomy ) who does her best to manage her mate as the latch-key ladies persist in throwing themselves at him. Of course, she cautions what looks like a one night stand is assumed to be a one night stand…fueling gossip and breaking hearts.

As the not quite ex-wife but fixer/mama/lover – i.e. as Sonny sang to Cher, “I need you babe,”- Kate Burton manages her man, her boy toy of a certain age, offering escape routes for the not always cooperative latch-key ladies. Always anticipating a crisis and helping her not sure he wants to be-ex (Kevin Kline) try to get through such dramas, she resonates as a woman of substance.

Have to love it, a bad boy (well, not grown up enough to be called a man) getting his knuckles rapped for as they say, “catting around.” Liz is one tough cookie. Smart, protective of her man, shrewd…wow, who wouldn’t want her on their team? Distracted not quite ex-hubby takes awhile to realize that despite the darling trinkets that he happens upon – most likely under the influence – it’s safer with his – and without a doubt wonderful is an understatement – wife. So though his dilemmas yield to Present Laughter it’s future happiness that’s really at stake.