“This is better than Season 11!” as one of ‘The X-Files’ fans concluded after playing the new mobile game called ‘The X-Files: Deep State’, which was released in early February and showcased at the first ever X-Fest convention in LaSalle, Illinois. The event was held on March 3, 2018 to commemorate the 25th anniversary of ‘The X-Files’ TV show.

More than 2,500 fans from all over US and abroad came to say hi so Skinner, have a cig with the Cigarette Smoking Man, and shake hands with their favorite monsters of the week. Several generations of X-Philes, as they call themselves, filled the local Celebrations 150 hall, some of them bringing children of their own, born around the time when Mulder first realized the truth was out there. Most of these children were old enough to enjoy the ‘I Want To Believe’ beer made by local brewery Hop Bucher.

The X-Fest started with an Agents’ Mixer pre-party hosted by the team of ‘The X-Files: Deep State’ game. ‘The X-Files: Deep State’ is a free to play hidden object adventure game set in the universe of the famous TV show. You play as a rookie FBI agent, solving mysterious crimes and occasionally bumping into Fox Mulder, Dana Scully, AD Skinner, ‘Ringo’ Langly, and other ‘X-Files’ characters. As of now, season 1 of the game has been released, featuring six cases, and season 2 is on the way.

The crowd at X-Fest was diverse, with a vast variety of FBI agents, aliens, and even one baby alien spotted in the lines for the photo ops with ‘The X-Files’ stars. ‘The X-Files: Deep State’ game seemed to have their very own ‘little grey man’ mingling with those who lined up to try the game and take photos. Fans got the chance to meet and mingle with fellow X-Philes, compete in trivia and act out scenes from the show mad lib style, eventually coming up with the hashtag #moistmulder when asked to fill in the blank for Mulder’s notorious nickname in the FBI.

The official day opened with ‘The X-Files: Deep State’ game panel, where creators of the game shared insights into how the game’s title came to be, some of the funny experiences that happened during the development of the game and announced the release of the 6th case of the game. Other panels during the day featured well-loved actors from the show: William B. Davis (as Cigarette Smoking Man), Annabeth Gish (as Monika Reyes), Doug Hutchison (as the liver-eating monster from the ‘Squeeze’ episode), and many others.

The FBI could not ignore the fact that aliens were among us, after all. Mitch Pileggi (the show’s Assistant Director Walter Skinner) came wondering by – only to see his illustrated face staring back at him from ‘The X-Files: Deep State’ banner. 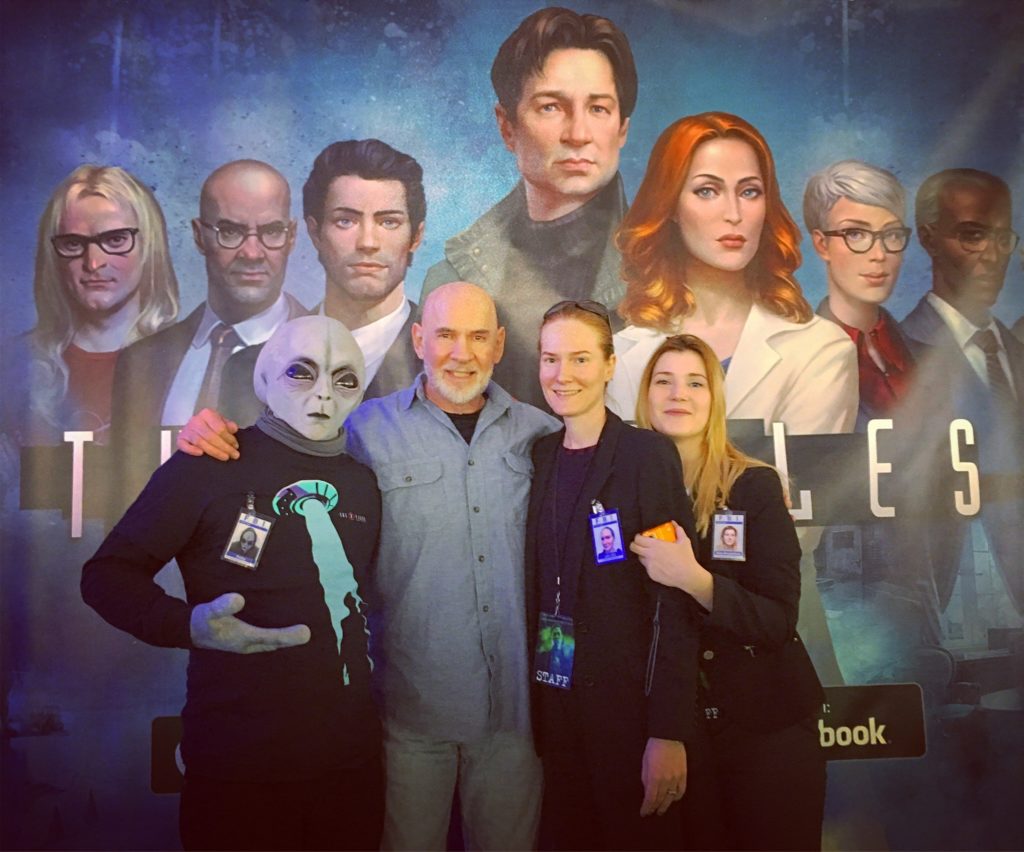 The event climaxed with the final panel, where Annabeth Gish, William B. Davis, and Mitch Pileggi reminisced on creating and keeping their characters alive in the show.

Mr. Davis said he was very disappointed to have got the silent part of ‘an older FBI agent’ for the pilot episode 25 years ago. His job was basically to chain smoke with an ominous grin. A friend of his, who got the part of the FBI agent interrogating Dana Scully, laughed about it a lot. ‘Well, after all these years he no longer does,’ Mr. Davis grinned ominously and fumbled around – presumably for his cigarette pack. Old habits die hard.

The X-Fest evening was wrapped up by screenings of selected X-Files episodes with live commentary by the actors starring in them.

All in all, the event turned out to be a huge success among dedicated X-Philes, who were willing to travel far and wide to mix with their favorite celebrities and discuss the show’s latest and most controversial season so far. The second edition of X-Fest is coming to LaSalle next spring; so the truth will be out there again. Don’t miss out!

The Residences at W Fort Lauderdale