The Hamptons International Film Festival (HIFF) presented its 2016 installment for the 24th year with a wide variety of outstanding film and talent. From the critically acclaimed Opening Night/US Premiere of ‘Loving‘ to Variety‘s ‘10 Actors To Watch’ to the Chairman’s Reception and The Closing Night Film ‘American Pastoral‘, the Festival was cock full of stellar performances, iconic interviews, great events, VIPs and celebrities. 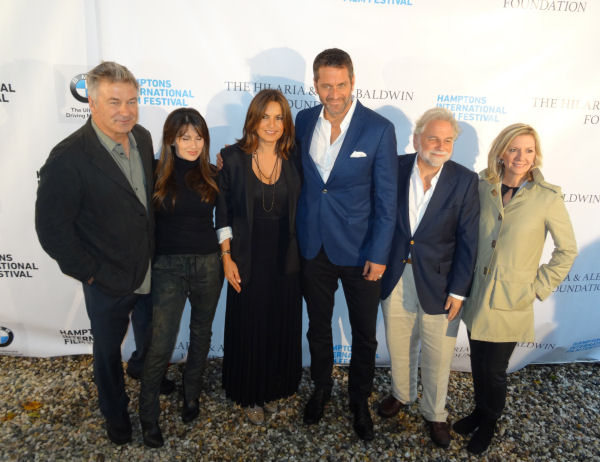 Kicking off it’s non-stop celebration HIFF threw its opening night party at Club Leo in East Hampton. Guest of honor writer/director Jeff Nichols of the highly touted film ‘Loving’ conversed with VIPs about the film’s once highly controversial subject matter of interracial marriage and how it spurred him to make this must see film. Set in the south during the late 50’s Richard and Mildred Loving (with stellar performances by Joel Edgerton and Ruth Negga), were arrested after their marriage was determined unlawful in the state of Virginia. After several years and with the Civil Rights movement underway their love and determination drove them to fight back. In winning their Supreme Court case the Loving’s could finally live the life they had always envisioned and history was changed forever.

The ‘Conversations With’ segments began with Variety‘s Jenelle Riley interviewing actor Aaron Eckhart who co-stars in the east coast HIFF East Coast Premiere film, ‘Bleed For This‘. The charismatic actor then received Variety’s Creative Impact Award for his contribution to films that include Erin Brokavitch, In The Company Of Men, The Black Dahlia and Scully. In the stunning ‘BLEED FOR THIS‘ Directed by Ben Youngeris, Eckhart plays real-life trainer Kevin Rooney who works with world title fighter Vinny “The Pazmanian Devil” Pazienza brilliantly played by Miles Teller of ‘Whiplash’ fame. After Vinny is in a near-fatal car crash that leaves him with major injuries, he is told he most probably will never walk again. Defying the odds Pazienza enlists Rooney to retrain him and goes on to win another championship. 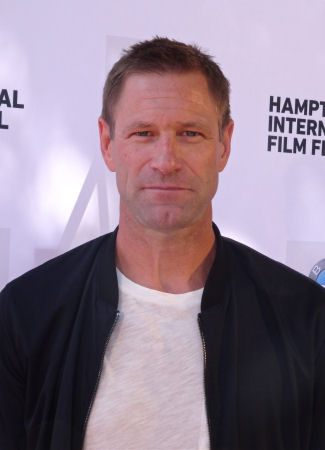 Aaron Eckhart co-star of Bleed For This on the Red Carpet Guild Hall in East Hampton, Hamptons International Film Festival 2016.

Variety‘s 10 Actors To Watch has an uber talented pool this year beginning with Riz Ahmed of ‘Nightcrawler‘ and ‘Star Wars‘ who was on hand for the East Coast Premiere of the traumatic love story ‘Una‘. Aja Naomi King from the critically acclaimed ‘How to Get Away With Murder‘ and the Oscar bound must see ‘The Birth Of A Nation‘ written directed and starring Nate Parker, an alumnae of Variety‘s 10 Top Actors 2012 talked about her hopes for an Oscar nomination and win. Mahershala Ali from ‘House Of Cards’ was at HIFF to promote his new coming of age film ‘Moonlight‘ and its poignant impact on what it means to grow up Black in America. Lucas Hedges (not in attendance) of ‘The Grand Budapest Hotel‘ and Kara Hayward made their major screen role debuts in the critically acclaimed Manchester By The Sea where the actress plays one of Hedges teenage love interests.

Other new thespians to watch but not in attendance were Alden Ehrenreich who has quite a list of accomplished roles in major films that include ‘Hail Caesar‘, ‘Blue Jasmine‘, ‘Rules Don’t Apply‘, the soon to be released ‘The Yellow Birds‘ and the upcoming ‘Star Wars‘ and is touted as a mega talent – and we agree! Rachel Brosnahan of ‘Boomtown‘ and ‘House Of Cards‘ co-star’s in the powerful ‘Patriots Day‘ a film that recreated the horrific Boston Marathon terrorist bombing. Ana De Armas appearing in the newly released ‘Hands of Stone‘ has also been enjoyed in ‘War Dogs‘ and will be featured in ‘Blade Runner‘ to be released in 2017. And Tavi Gevinson who’s films include ‘Enough Said‘, ‘Human People’ and the upcoming ‘The Cherry Lane’ starring Diane Lane is on the top actors list to watch. Academy Award winner, songwriter/performer John Legend has made his acting debut in the musical comedy ‘La La Land‘ appearing opposite Emma Stone and Ryan Gosling playing a successful jazz performer and has garnered some outstanding reviews. A must see!

The second ‘Conversations With’ featured Academy Award winner Holly Hunter who was interviewed about her newest film ‘Strange Weather‘, that saw its US Premier at HIFF’s Southampton Opening Night. The actress discussed her views on politics to how she chooses what films to make to her impressive roster of movies where she plays powerful women characters that include ‘The Piano‘, ‘Broadcast News‘, ‘The Firm‘, ‘Raising Arizona‘ and ‘Crash‘ not to mention her acclaimed cable TV series Top Of The Lake and Saving Grace. Hunter’s portrayal of a strong unconventional southern women in Director Katherine Dieckmann’s ‘Strange Weather’ is riveting as she discovers her limits and what she needs to do to live a happier life. An on the road film where Hunter travels with her best friend played by Carrie Coon throughout the deep-south asking questions without answers in the hope of coming to terms with a tragedy, finding forgiveness and moving on.

A coveted event where celebs and film VIPs come together and share their thoughts in a relaxed atmosphere is the annual Chairman’s Reception. Once again chairman emeriti, Stuart Match Suna opened his home to harried festival goers who stop by and payed their respect to the HIFF board and staff that included co-chairmen: Alec Baldwin, Randy Mastro; Executive Director: Anne Chaisson; Artistic Director: David Nugent and actors Bob Balaban and Mariska Hargaerty.

Edward Norton known for his directing and award winning acting ability, was the last but not least of HIFFs ‘Converations with’. He also received the ‘Career Achievement Award’ for his outstanding roles in celebrated films that include ‘Birdman‘,’Fight Club‘ and ‘Primal Fear‘. Not only has Norton entertained audiences in front of the camera but he told of his passion for what goes on behind the lens as executive producer of Bunker77, a documentary depicting a wealthy out of control heir (Bunker Spreckels) who’s life’s ambition was to surf hard, party harder and become famous.

The charismatic Annette Bening stars in director Mike Mills‘ inspiring film, ‘20th Century Women‘ about a concerned single mother raising her son played by Lucas Jade Zumann. The heartfelt dramedy is set in Santa Barbara during the late 70s where Benning’s character and her adopted group of rag-tags that include Elle Fanning as her son’s wayward friend try and teach her boy and ultimately themselves about relationships, love, and independence.

‘Lost In Paris‘ directed and scripted by the very entertaining comedic husband an wife team Fiona Gordon and Dominique Abel made its East Coast Premiere at HIFF to major accolades. An almost cartoonish form of physical comedy that parallel’s Charlie Chaplain and Buster Keaton films, tells the story of Fiona’s journey from Canada to Paris to visit a kooky family member who’s in need of some help. Through a series a mishaps Fiona’s adventure leads her to Dom, a street urchin and initially barely the man of her dreams but in the end love always wins out. A must see for those who love to laugh!

The Documentary ‘Score‘ directed by first-timer Matt Schrader made it’s World Premier during HIFF and takes the audience through the process of creating music in film. The composers create the effects they are looking for by pushing the boundaries and experimenting with cutting-edge methods and new technology. The documentary explores the creative process for many of Hollywood’s greats including stellar artists such as John Williams, Danny Elfman and Hans Zimmer and shows how they create an emotional connection with their audience through their music. A can not miss for music in film lovers.

‘Franca: Chaos And Creation‘ directed by Francesco Carrozzini made its North American Premiere at HIFF to critical acclaim. A documentary about how Vogue Italia‘s Editor-in-Chief Franca Sozzani revolutionized fashion magazines in the late 80s. Breaking from the traditional covers and fashion spreads she broached tabu subjects with conceptual art, trendy fashion and edgy photography to create some of the most exemplary covers in the past quarter century. Interviews with iconic fashion figures that include Karl Lagerfeld and Bruce Weber, director Francesco Carrozzini presents an intimate look into one of the most influential names in fashion who just happens to be his mother. A go to for fashion aficionados. 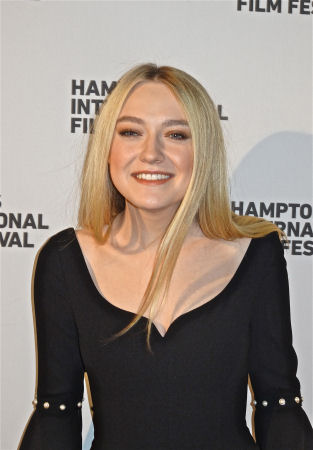 Dakota Fanning on the Red Carpet during Hamptons International Film Festival 2016 where she introduced her latest film ‘American Pastoral’.

HIFF 2016 closes out the festival with Ewan McGregor‘s directorial debut of American Pastoral. A highly lauded film adaptation of Philip Roth’s Pulitzer Prize-winning novel depicts the social turmoil of the US in the late ’60s and early ’70s. McGregor who plays a former celebrated athlete and his beauty-queen wife played by Jennifer Connelly live the perfect life when their daughter played by Dakota Fanning becomes a social radical. Their ideal family image is then fractured when their Fanning’s character goes into hiding after being implicated in a violent crime. A provocative film that pushes the parents over the edge and propels them and the viewers to come to terms with the American Dream verses reality.

For winners and more information please go to: http://www.hamptonsfilmfest.org.

0
Millennium Magazine December 15, 2016
No Comments Yet