DRAMA SHARPER THAN A SERPENT’S TOOTH

King Lear begins like many a family gathering yet the stakes are far higher than we even anticipate as we watch John Lithgow proceed to destroy what was initially just your average dysfunctional family. Progressively transfixed we can hardly believe what starts to transpire as the second performance of the 2014 season of Shakespeare In The Park unfolds. Lithgow is simply amazingly authentic. So real, so true in his initial arrogance as an irascible patriarch and as the horrors he sets in motion evolve, he remains accessible though foolish and bewildered by the course his own actions have taken, his Lear has sufficient flashes of lucidity to begin to realize he has become the master of his own undoing.

Shakespeare’s tale of a man gone mad and a King with thunderously bad judgment, accelerates after Lear demands each of his three daughters tell him how much they love him as he divies up his kingdom for politics sake. In the scale of royal behavior his demand seems not such an unreasonable request; who’d have predicted it would be the catalyst for tragedy? Goneril played by Annette Bening whom we learn soon enough is “marble hearted” and her sister, Regan, played by Jessica Hecht, earn the power they icily covet as they share smarmy sentiment lapped up by Lear.

Telling their father what he wants to hear, they falsely proclaim their affection and devotion: “A love that makes breath poor, and speech unable,” says Goneril while Regan professes her love to be so strong it is in effect “an enemy to all other joys.” Voraciously seeking to put a price on love, Lear turns to his younger daughter and favorite, Cordelia (played by Jessica Collins) to hear what he anticipates will top the others, relishing the moment he awaits what he is sure will be the icing on the cake. But compulsively honest, Cordelia keeps it simple telling him that she loves him like a dutiful daughter regretting that she cannot do more than tell the truth, “Unhappy that I am, I cannot heave my heart into my mouth.” Needless to say such feedback is not what this father was looking for: Cast out and cast off, Cordelia is no longer the apple of her Father’s eye but rather now “a wretch whom nature is ashamed.”

The production directed by Daniel Sullivan makes it all plausible. Set in ancient Britain in the era of Celtic Priests (Druids), the set by John Lee Beatty is stark, but the scene changes are moodily effected by exceptional lighting designed by Jeff Croiter. With a bleak backdrop, Lear’s horrific decision making, his elder daughters’ malevolent, malicious natures, Cordelia’s struggle, subplots too of other misguided fathers and plotting siblings stand in eerie relief as we watch this ravaged King’s descent into madness. It’s all not so far removed from a reality we can sadly somehow comprehend thought without a doubt, be appalled at the hypocrisy that spurs the plot.

There is logic to the actions strangely, with motivations laid bare this rendition of Lear is frightening, a horror story in its clarity. So viscerally disturbing at times its brutality is shocking. But Lithgow lets us empathize just enough with this once majestic now broken old man. Our hearts follow him through every tragic circumstance he encounters and we watch with morbid fascination until like Lear himself we just cannot take anymore. We however get that fraction of distance watching Lear disintegrate and finally shatter is just barely manageable so emotionally engrossing is this performance. This King Lear is literally gripping. Don’t miss it.

Free Shakespeare in the Park tickets are distributed at noon the Delacorte Theater in Central Park every day there is a performance. The Central Park entrances closest to the theater are at 81st Street and Central Park West or 79th Street and Fifth Avenue. There is also virtual ticketing lottery daily on www,publictheater.org. 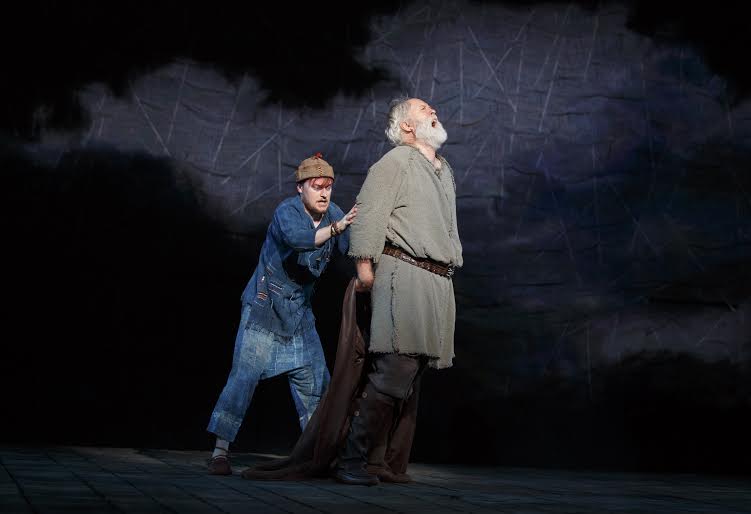 Piece of My Heart