Love is wicked funny in this brilliant, upbeat, and contemporary Midsummer Night’s Dream by William Shakespeare at The Delacorte Theatre in Central Park…. Only through Sunday, August 13

Once in a blue moon (to be fanciful) does a comedy come along that upends your grounded in reality thinking….and guess what? MAKES you believe in magic. 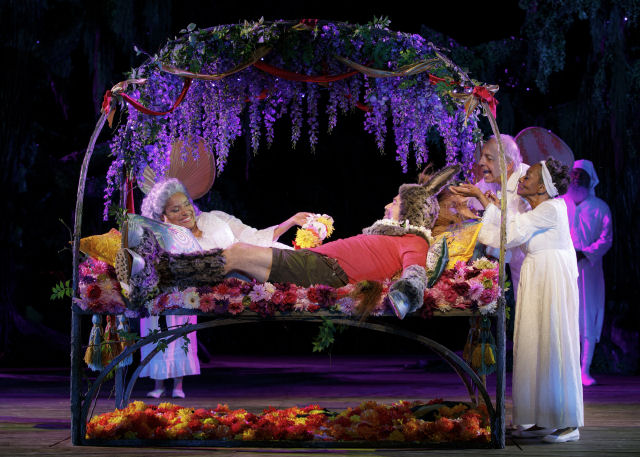 So does Shakespeare in the Park’s Midsummer Night’s Dream lure you in, suspending disbelief, until you too are under a spell…in this case willingly, willfully do you abandon yourself to the wacky romp, the poetic journey, the delightful interlude that is Midsummer Night’s Dream in Central Park’s Delacorte Theater transformed into the most enchanted forest of all.

When the merry sprite Puck meddles with a magical love potion, young lovers lost in the woods mysteriously find themselves infatuated with the wrong person in this hilarious, fairytale fantasia that proves the course of true love never did run smooth.

As lovelorn and love-struck Helena, Annaleigh Ashford, is effervescent. At first bubbling, over with the agony of love gone wrong then fueled by the anger from too much love, too soon (furiously perceiving such sudden emotion as not affection but disdain). She’s paired mightily by the handsome, athletic swains who woo her – Kyle Beltran (Lysander) and Alex Hernandez (Demetrius) – from her point of view with the disrespect that occurs as fools rush in, from theirs with the passion that comes as two hearts beat as one. 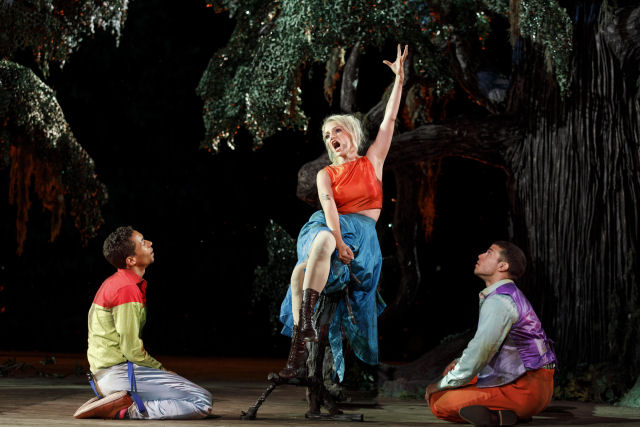 Broadway favorite Annaleigh Ashford is radiantly funny as a lover once scorned now overwhelmed by affection in Shakespeare in the Park’s outrageous comedy, Midsummer Night’s Dream. With Kyle Beltran as Lysander and Alex Hernandez as Demetrius. Through Sunday, August 13th.

Shalita Grant is Hermia, a young woman in love with the man her father does not deem Mr. Right, a true crime in Shakespeare’s day. But thanks to the merry meddling of wayward, wistful fairies – an elderly but sprightly group wafting about in white nighties – led by their Queen, Titania, the regal yet magically vulnerable, Phylicia Rashad, her King, the imperious but still loving, Oberon (Richard Poe), and despite the misadventures of one of the most famous tricksters of all time, Puck (Kristine Nielsen), all’s well that ends well.

Of course, along the way as there’s a play within a play, an earnest bunch of characters, led by one put-upon director; a troupe whose comedy is even more uproarious. Notably Bottom, a genuinely grandiose ass of an actor (played by Danny Burstein) whose transformation into a donkey (and the momentary love object of Titania) is a real kick. And Jeff Hiller whose role as a Grecian Bride, played in drag, gets some of the biggest laughs of the evening. 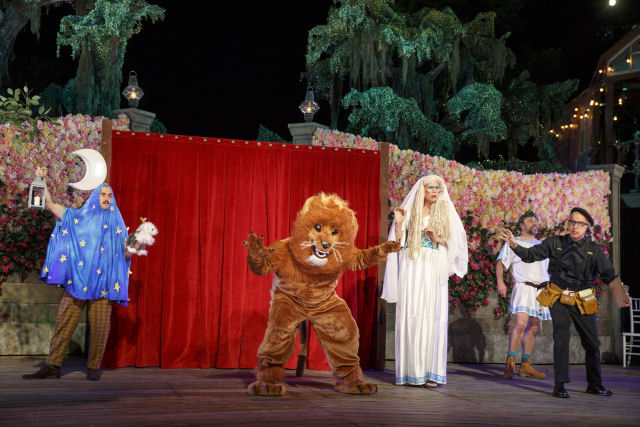 Silliness rules as a play within a play unleashes a cowardly lion and a put-upon director but all’s well that ends well as this wacky troupe gets to perform at the power wedding of the Duke of Athens in a Midsummer Night’s Dream in Central Park at The Delacorte Theatre through Sunday, August 13.

All this action is framed in the context of a wedding’s entertainment for the Duke of Athens, Theseus’ marriage to the glamourous Hippoltya (De’Adre Aziza) up there with Beyonce in terms of stage presence) a former adversary, the strong, sexy Amazon Queen is transformed into a glistening object of desire. 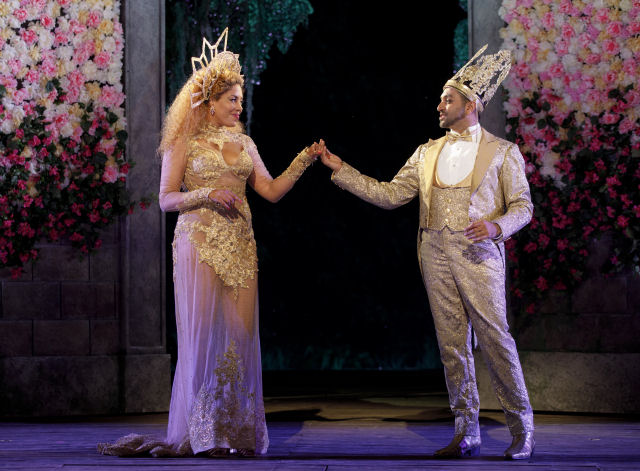 As glamorous as Jay Z and Beyoncé are The Duke of Athens, Theseus (Shavesh Patel), and his Bride, Hippolyta (De’Adre Aziza) celebrating their wedding in Shakespeare in the Park’s Midsummer Night’s Dream

Experiencing this Midsummer Night’s Dream is something like being at a fabulous party. Indeed, given the jazz band and the melodic presence of a jazz singer (Marcelle Davies-Lashley), it could well be a New Year’s Eve where there are no constraints on hook ups and where all goes whimsically awry after midnight only to be set right by morning.

Lear de Bessonet, Founder of The Public Theater’s groundbreaking Public Works program and Resident Director, brings her electric theatrical vision to the classic romance about the supernatural nature of love. “There is no difficulty in the world that Shakespeare can’t address,” Eustis remarks, “In our troubled times…the joy of A Midsummer Night’s Dream is as necessary as beauty.”

For more information on Shakespeare in the Park…https://www.publictheater.org/en/Programs–Events/Shakespeare-in-the-Park/?SiteTheme=Shakespeare

The sets by David Rockwell are twinkling woods luring lost lovers into their deep heart. And the costumes by Clint Ramos hint at modern day with bold bright colors and metallic flashes but have a hint of retro flair adding a fun, playful note to a play that deals in drama with a light, entertaining touch. Just perfect for a Summer evening in Central Park.

About Garcelle: The Picture of Perfection This Exceptional Actress Calls herself a Work in Progress