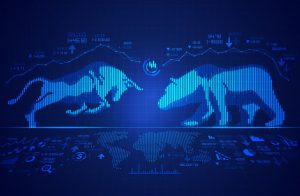 The good news? As of Tuesday, BTC prices were up around 10% for the week. The less-good news? Both crypto and traditional markets are still hovering near multi-year lows. From surging inflation and a crippled supply chain to the end of COVID-era stimulus and the war in Ukraine, a wave of negative factors has erased trillions of dollars in investor gains. With the Fed expected to raise interest rates at least three more times over the next few months, we wanted to see what the smart money — from Wall Street and beyond — thinks will happen next. Here’s what they have to say:

Why it matters… With interest rates set to rise over the coming months, market watchers expect continued turbulence — but do rising interest rates automatically mean that crypto prices will fall? We can look at the past for clues. From 2016 to 2019, U.S. interest rates rose from nearly 0 to 2.5%. BTC? It rose from nearly $400 to over $10,000. And whether we’re experiencing a full-on crypto winter or just weathering a shorter-term storm, some of the biggest banks and venture firms in the world appear to remain bullish on the technology’s future — and are setting themselves up to ride the next wave.

Sushi by Bou Opens in Brickell