When so many of us are facing uphill battles, heartbreak, stress, or any sort of pain or adversity, we turn to music. The solace of a calming, or a spirited, tune, can help us find a moment of relief. We can identify with lyrics, believing that, somehow, they were written just for us. When you listen to Julie Mintz’ music, it’s a perfect vessel for respite. Her first full-length solo album, “Abandon All Hope of Fruition”, takes pain and strength, mixes it with light and dark, and creates a personal, emotional, “Gothic Americana” embrace that seems made for everyone.

Julie Mintz grew up in Texas, with classic music wafting through her house. Her father imbued their home with classic female voices, like Patsy Cline. “We’re lucky if we’re exposed to great music in our formative years,” she says, noting, “Being exposed to such genuine artistry like (Cline’s) at a young age as well as taking classical piano lessons, I think instilled in me a love for songwriting and heartfelt music of all kinds.” That Southern Texas upbringing exposed her to influences like Dolly Parton, June Carter Cash and Emmylou Harris, three very intense women with intense emotion. “I was lucky to be in a place that had the influence of a lot of classic country artists. My mom also has a beautifully dramatic flair, so that was instilled in me from a young age and I’ve always been drawn to women that weren’t afraid to express their innate vulnerability and beauty.” Then, when she was in her twenties, she discovered Joni Mitchell, the legendary performer who is the zenith of distinctive female voices. “My first serious boyfriend was a singer songwriter and played me Blue, and I remember being transfixed.”

Initially, however, Julie Mintz wasn’t going to knock out the world with her music, she was going to apply her skills to science, with the study of Neuroscience and Behavioral Biology. She remembers, “I was also naturally very studious and did well in school particularly in math and science. And interestingly, I definitely learned music from a mathematical perspective. But as far as my interest in Neuroscience, it was two-fold. Foremost, I was looking to understand the inner-workings of my own mind. Secondly, because I come from a very academic family, I was studying Neuroscience with an eye on attending medical school.” When she began working in a hospital in Atlanta, however, she realized a medical career just didn’t fit into her world, and music broke through once again.

As she acted in television and film, did musical theatre and sang backup, she never quite took the lead; but going solo was always Julie’s goal. “Over a decade ago you could find me singing my songs in local singer songwriter venues like Hotel Cafe. I was just lucky enough to meet Moby along the way and have the opportunity to perform with him on bigger stages and have him open so many more doors for me to my solo career.” Moby produced her EP, “The Thin Veil”. And, three years later, her first full-length album was born.

SEE BEHIND THE SCENES OF THE EXCLUSIVE SHOOT FOR MILLENNIUM MAGAZINE

Mintz defines her work as “Gothic Americana.” She says it is “exploring the darker inner-workings of my mind and has a moody feel in terms of the kinds of stories I’m telling.” It is the “Americana” country and gospel and bluegrass influences, along with distinctive storytelling, that set her apart from other female singer/songwriters today. Because Julie Mintz just doesn’t create music that you can relate to, she creates music you have lived and experienced, with a romanticism and honesty not heard since the days of Tori Amos, Paula Cole and Shaun Colvin. And while she admits she may not be an expert in matters of the heart, Julie Mintz says, “I’ve definitely healed from things I thought at the time that I’d never recover from. Of course our experiences shape us and change who we are, but hopefully we are able to persevere. I always think of an interview I read with Anita Pallenberg where she spoke of the resiliency of the heart. I’m paraphrasing, but she basically said if she could get over her breakup with Keith Richards, we are all capable of healing from any lost love relationship. That pretty much summed it up for me. If you can get over a member of The Stones, you can probably get over anyone!” 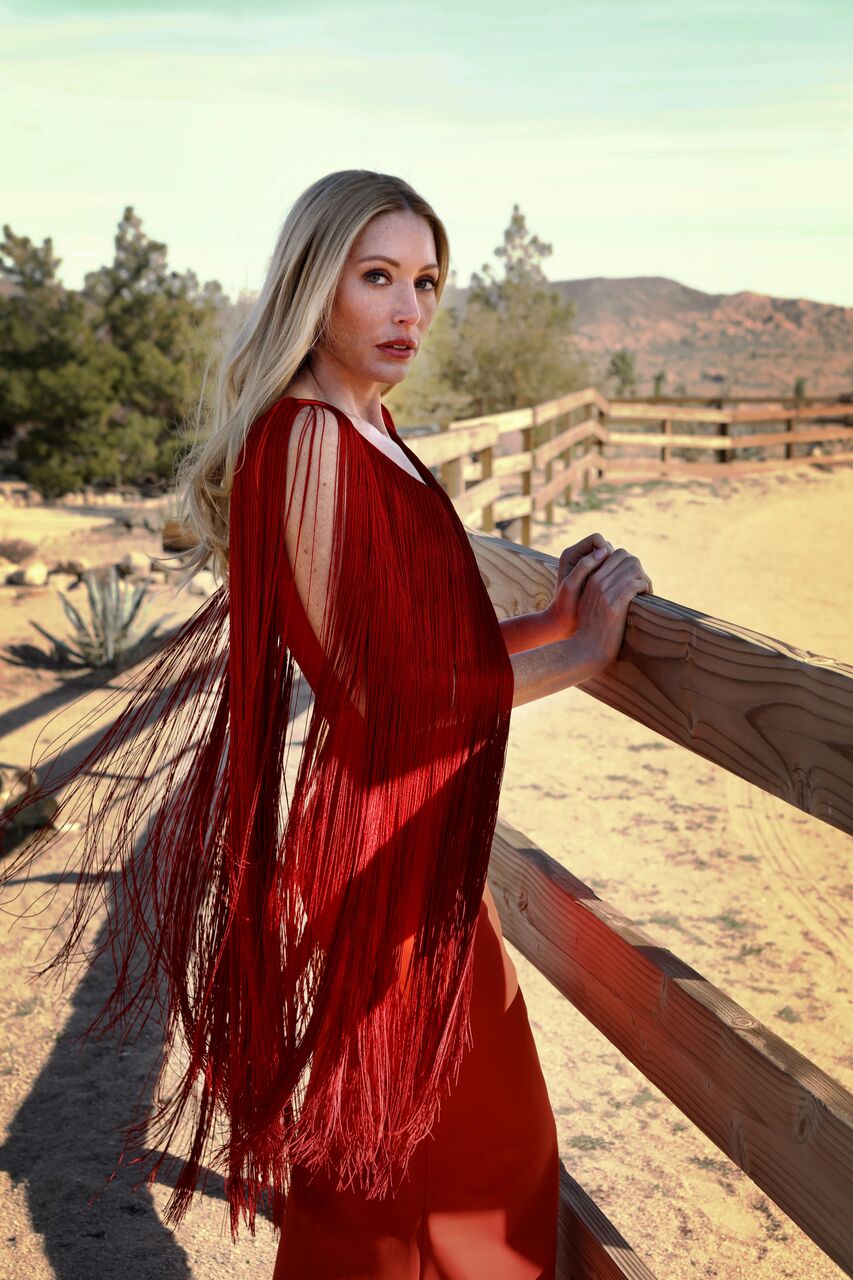 On the universal topics of heartbreak, loss and healing, she continues with, “For me, it’s important not to give too much credit to anyone from the past, especially someone who doesn’t deserve it.” While creating her latest work, she says, “During the time I was writing this album I was dealing a lot with feeling like I wasn’t someone’s first choice whether it was being used by someone as a distraction from their primary relationship or being involved with someone who wasn’t honest about their faithfulness.”

There is a through line connecting “The Thin Veil” and “Abandon All Hope of Fruition”, and that vein is emotional expression and resilience. Her EP explores what drives us subconsciously, and her LP continues with awakening and acceptance. Her spirituality is grounded and not hokey at all, because it is truly from her heart, and casts light onto feelings we all have. “For me, my level of deep yearning for things I couldn’t control was creating a lot of misery in my life. And that made for good material to mine for songs, which you can hear on my album, but it made for a lot of suffering day to day.” She wanted to figure out a way to understand and accept her life as it is now. 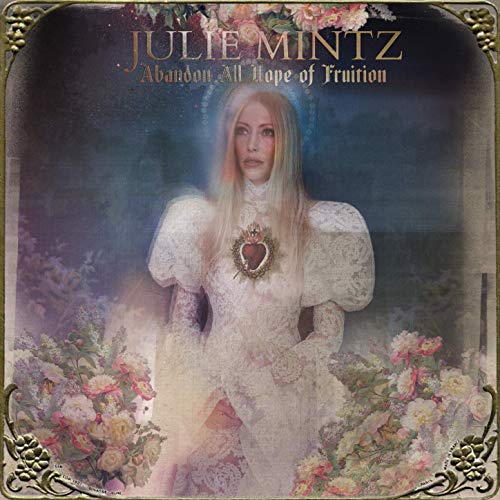 “Abandon All Hope of Fruition”

“That’s the meaning behind my album title,” Mintz explains, “ ‘Abandon All Hope of Fruition’ is a Buddhist mind training practice that involves letting go of any hope for what we think we need in the future to be happy. Just abandon it! Let it go! And say, ‘This is it. So what if I never get married and have kids. So what if no one else ever hears my music. Isn’t what I have good enough?’”

Those are questions we have all asked ourselves, which is what makes Julie Mintz’ music so relatable. She opens up her emotional universe to her listeners, and leads them on a path to, perhaps, understanding what drives us to their motivations and actions. “I’m not about telling people what they ‘need’ to do, ever. I think everyone is on their own path doing the best they can. Whether people are driven to attain success, money, or love, the truth is none of those things bring us fulfillment or happiness which is why I’m interested in learning how to dial down that intense yearning part of myself.” 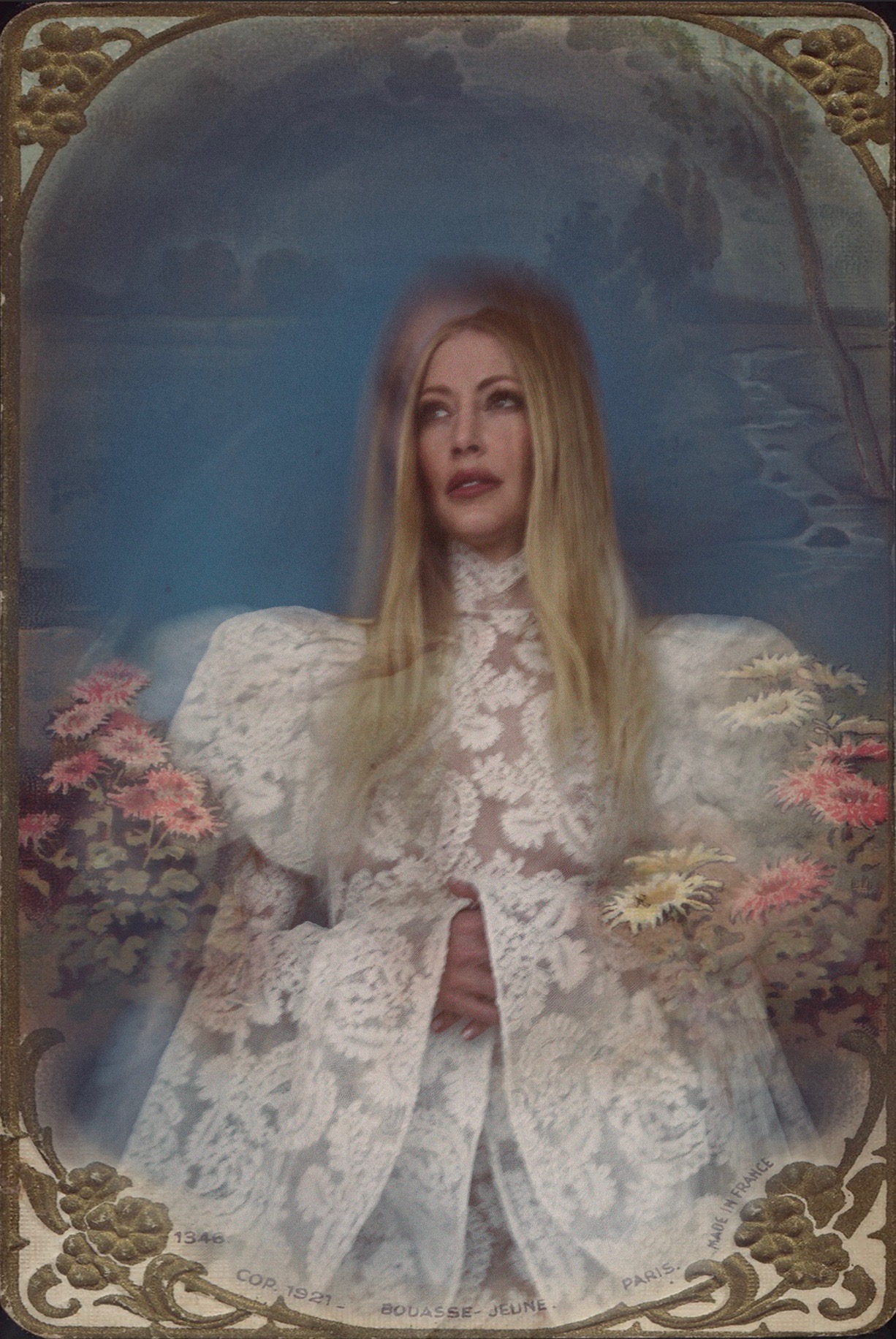 The dichotomy of intense desire and complete fulfillment show in the cover art of “Abandon All Hope of Fruition.” Mintz looks like an angel, with long blonde hair and child-like, searching eyes; her beauty enveloped in an ethereal haze. In the middle of her white lace dress is a sacred heart, a symbol of resurrection and devotion. When asked about it, she explains, “Creativity for me has always been a very spiritual process. That’s evident in the album title. And so I was very drawn to my album artwork having a spiritual element and was looking at a lot of vintage Mother Mary cards for inspiration. But because my songs are dealing with heartbreak and loss I wanted that to be reflected in the art as well. I felt like a scared heart would be beautiful symbolism for what my music represents,” adding, “I also love that I’m Jewish, my album title is taken from Buddhism, and the sacred heart is a very typically Catholic symbol. I wanted to combine all aspects of spirituality and religious iconography.”

Julie Mintz’ work is fantastical, but grounded, like if Alice In Wonderland met Iggy Pop. Mintz finds an elegance that ensures her sound doesn’t fall into a chasm of darkness and misery. When alerted to this observation, she says, “It hasn’t been a conscious decision to add a delicate side. That’s just a very true part of my personality. I have a lot of fragility within myself that I’m working through in my art, so that comes through. Luckily, I also have strength and resiliency and enough awareness of when things are getting too dark, so hopefully I’m able to balance the dark and the light in my music.”

“Abandon All Hope of Fruition” radiates the truth of life and love, and the thirst for understanding ourselves and the people we choose to love. “You can hear that feeling in ‘Want to Feel Wanted’ as well as ‘Bow and Arrow’”, she points out, “When I sing ‘You and I are a Bow and Arrow, the closer I pull you the further you fly’, that’s about someone always creating distance as soon as you get close. Or even ‘Hard Needle to Thread’ when it’s just that person you can’t figure out where you stand with them.”

Today, she finds inspiration in artists like Patty Griffin. Mintz calls Griffin her “biggest songwriting influence and the artist I’ve seen the most live”, but she also loves “Feist, Cat Power, and Jenny Lewis and have been encouraged to write more on electric guitar from watching them perform. And this year I fell in love with Lady Gaga after watching A Star is Born.” She has also been branching out past music. “I’m writing my first novel which has been a really great comedic outlet for me. Because my songs can have a dark sad side, I wanted to do something that tapped into my light funny side, and I have so many ridiculous dating stories from having lived and dated in Los Angeles for so many years. So working on my novel is a big one for me.” 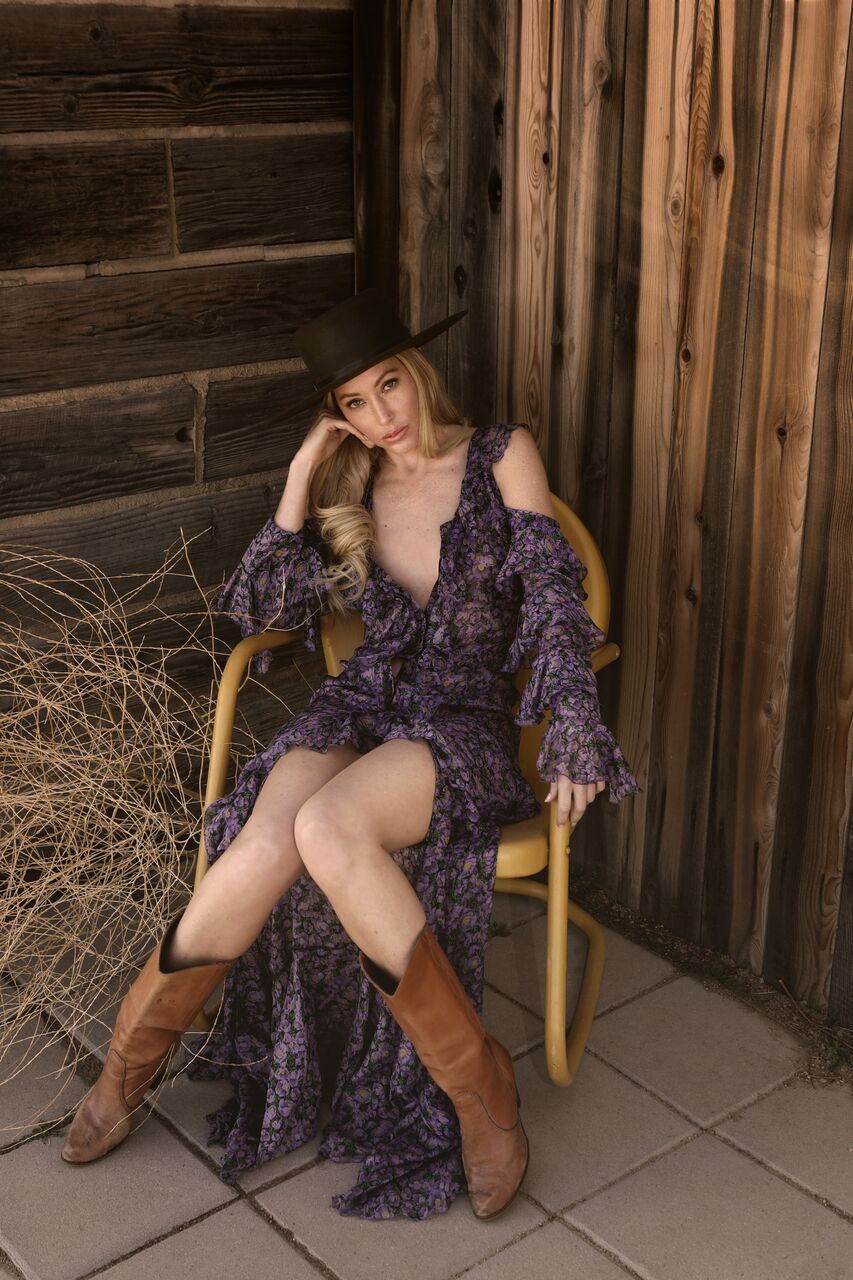 Julie Mintz’ essence is creative expression. Being an author is a thrilling accomplishment, but her true treasure is music. “The best part of music for me is getting lost in it. I’ve never been an adrenaline junkie for performing in front of a crowd. It’s always been about having an outlet for my feelings.” It is there she finds happiness and, she says, “As far as joy in life, I love spending time with friends and family. I get the most joy from being with people I love.”

Right now, in the here and now, Mintz’ is allowing herself a few moments to experience this moment and how much people are loving her work. “I’m really trying to enjoy the fact that I completed my first full length album. I’m still out promoting it, particularly the current single ‘Tired to the Bone’.” She adds, “Beyond that, I’m working on the second draft of my novel and taking things one day at a time. I have a cool cover mashup in the works that Moby and I are finishing, and I would like to release that as my next single. But in keeping with the message of my album, I try not to worry about how the future is going to unfold and just enjoy each day as it comes.”

“Abandon All Hope of Fruition” is now available for download!

SPRING TO TAKE A TRIP IN CIRCA 39 STYLE