It may be hard to believe, but Hollywood’s “Award Season” is in full swing, and the Screen Actors Guild Awards has given way to the next big things, especially the Academy Awards and the Grammys. However, for Vitalie Taittinger, 40, President of the still-family-owned Taittinger Champagne (taittinger.com/en), the opportunity to celebrate what’s most important in life–family traditions and the need to give back–never loses its importance.

Of course, as she is succeeding father Pierre-Emmanuel Taittinger, the quality of the wines produced and its transcending what’s in good taste is also a constant focus. Although Champagne—naturally—remains a beverage of choice in the elite realms of Hollywood and fine dining, she is committed to making life beyond “big nights” count–from the continued funding of the SAG-AFTRA Foundation’s Emergency Assistance Program for actors and their families to maintaining a quality atmosphere for the Champagne house’s employees back in France.

2020 marked Vitalie’s 13th year flying from France to Los Angeles to welcome Hollywood to SAG’s biggest night. Although this was her first year doing it as President (having assumed the position on December 31), she took everything in stride. Even with intensified freeway traffic and construction, Vitalie breezed into downtown L.A. restaurant 71Above on a recent visit disarmingly relaxed and as chic as you would expect a cultured French woman to be.

“(Our involvement with the SAG awards) is important to our legacy,” she explains, over a glass of Brut La Française NV–which is always served at the ceremony. “In addition to our objective to craft the best wine possible, our allying with SAG in 2001 presented us with an opportunity to be a brand with real personality. We express our singularities as a producer within the competitive Champagne industry, much as the actors do in their competitive industry.”

When Vitalie assumed the position of Champagne Taittinger’s Director of Communications in 2007, the opening toast was long an institution, but the honors were handled by spokesmodels. However, when Vitalie first arrived in Hollywood to attend the SAG Awards shortly after taking her new job title, SAG’s award show decision makers determined that it was more appropriate for Vitalie to lead off the evening and add extra authenticity to the proceedings.

“It seemed more fitting that a member of the Taittinger family paid tribute to the ultimate family of actors on this occasion, even though the models did their bit,” says Vitalie. ”In the beginning, the experience of participating felt a little strange. However, SAG has become like extended family. Today, my involvement is not just about my appearance on the red carpet, but also becoming more deeply involved in what the SAG-AFTRA Foundation represents and the causes its members support. The Foundation has taken progressive positions on such issues as providing medical assistance to those in need, women gaining more equal footing with men in the entertainment industry, and bringing about societal changes that are meaningful to all of us.” 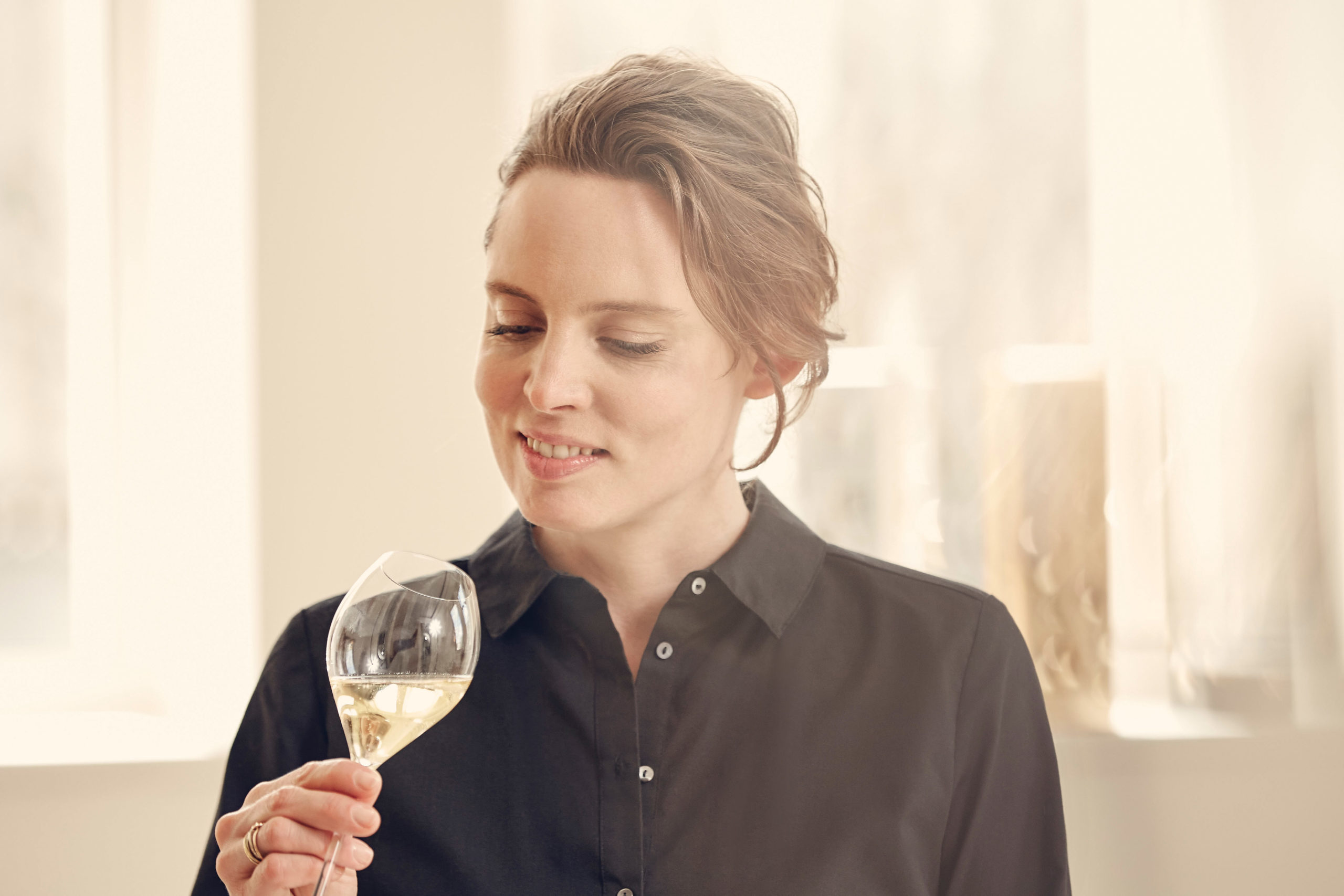 Long before Vitalie stepped into the bright lights of Hollywood, she wanted to follow in the footsteps of her grandmother and great-grandmother, both artists, by pursuing painting. She studied art and painted for a number of years, but eventually realized she preferred social interaction to the traditionally solitary artist’s life. She worked at various marketing agencies before returning to the family business. From there, she came full circle.

“To be a full-time artist, one has to be courageous enough to be by themselves and present with their idiosyncrasies all the time,” she muses. “I realized I was a social being and need to be with people on a regular basis. “Although I am involved with (promoting the Champagne) on a daily basis, I don’t see what I do as marketing. I see it as bringing the brand’s history and approach to crafting Champagne to life, which is why I try not to be too technical in describing the Champagne. Whether I am at the SAG Awards in L.A. or at work back in France, it is my goal to create a space that will be very special and emotional to people when they enjoy a glass or bottle of Champagne Taittinger.”

Vitalie explains that the process of creating compelling images and copy for Champagne Taittinger involves much preparation and forethought, much like actors preparing for certain roles. In the case of Champagne, which is aged for three to four years before it goes to market, she will direct the artwork and messaging to adapt to the way Champagne drinkers will view the product over time. Just as an actor has to truly understand the script and the director’s vision, she needs to have a fix on the terroir’s and weather’s impact on the final product. Like a good film crew, there is a cohesive nature among the employees and winemakers that she draws inspiration and direction from.

Just like the Screen Actors Guild, Champagne Taittinger had its own periods of challenge and turmoil. In 2005, after some off years, the house was sold to a large hospitality corporation. However, Vitalie—beaming with pride—notes that her father had great reservations about the sale to a firm expert in international travel but less so in crafting Champagne. Sensing the buyers would realize their mistake, he drafted a proposal to be able to buy back the company as he was concerned the quality of the Champagne would suffer and a legacy dating back to the 18th century would be lost to the vicissitudes of modern commerce.

“He did it very discreetly as he sensed not all of the family members would agree with his decisions,” she recalls. “When he succeeded in buying back the company in July 2006, I was so impressed. This was the moment I decided to work with him to bring Champagne Taittinger back to its esteemed place in the Champagne world. I wanted to learn all about the process of creating our family Champagne as well as communicating what Taittinger represents. It is a very complex job with many particularities with working in the vineyards, cellars, and cuvées.”

Between the 2019 and 2020 SAG Awards ceremonies, Vitalie turned her attention to updating another Taittinger tradition developed 52 years ago. The international culinary competition, which extends over the course of about six months, is dedicated to helping young chefs find their voice in the broader world of gastronomy, through the creations of dishes that are paired with (..but of course!) her family’s Champagne. For the consumer, Vitalie explains the contest also served to draw attention to the way the public can connect gastronomy to the way they entertain at home and seek out inspirational restaurants.

“The gastronomic context is different than it was 53 years ago, and as the approaches to cooking have changed a lot, there is always the question of what exists now in culinary knowledge and how we need to adapt,” she says. “In future competitions, we will be paying more attention to the energy chefs from around the world put into their work, the twists, lightheartedness and contrasts they are bringing into their work. We also need to move forward in the way we are communicating our messages to the public and the industry, as we’re now living in a digital world that did not exist 53 years ago.”

By the same token, her professional outlook is also changing.

“It’s no longer not just about adjusting to digital media,” she points out, adding she is undertake her new responsibilities with the support of Damien le Sueur (General Manager) and her brother Clovis Taittinger (promoted to General Manager), the current Management Committee and all House employees. “We are trying to reduce our packaging, and be more precise in the way we are doing our communications (with consumers and trade), and in the way we are approaching customers and environmental issues. After we’ve concentrated on producing the best wine, we are trying to bring that mindset forward in how we get our message and product to our fans.”

THE TASTE-MAKERS TOAST THE OSCARS

Adam Dennis Geiger: Insight to Building the American Dream Through Fashion and Film

IT’S ONLY ROCK ‘N’ ROLL, BUT WE LOVE IT: The Bourbon Room Brings Live Music Back to the Sunset Strip