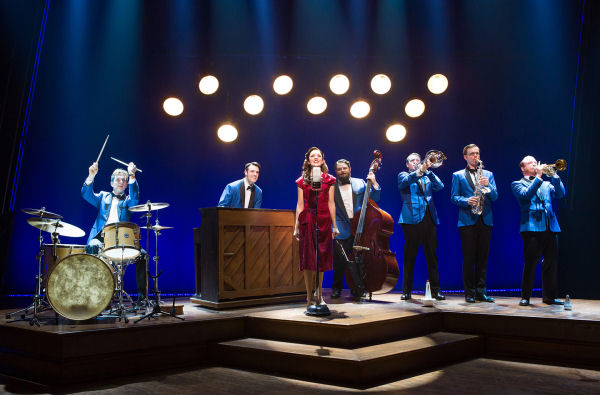 You know who tells me no? Nobody! is the anthem of Bandstand the Broadway musical that’s all about finding joy and triumph among the lingering shadows of the past. Set in the smoke filled, swing fueled night clubs of 1945, the show candidly reveals the destruction, emotional and physical, that haunts a band, in every sense of the word, of men home from the war in 1945 as it lets us ride along with their recovery set to the swingin’ big band sound of the era. Though today soldiers home from the war may face similar issues with no fanfare, back then they were greeted with ticker-tape parades and overjoyed families. Shattered inside, the characters in this patriotic Broadway musical, grasp at shards from their former lives as they rebuild lost connections and beat the odds to find success.

As the show begins we meet Private First Class Donny Novitski (played by Corey Cott recently of Gigi on Broadway), singer and songwriter, fighting his own demons and the bottle, with as the story goes “only the shirt on his back and a dream in his heart.” Should every veteran be so empowered! The story of how a broken bunch picks themselves up and puts themselves back together again is what Bandstand is all about. It’s a tale – with terrific 1940’s-era tunes – of triumph over adversity, of overcoming setbacks that would take down most anyone, much less a motley crew of broken soldiers. But survive and flourish they do and that is what makes this rousing show a celebration of all that America is supposed to stand for. So it’s perfect for the most patriotic month of the year, July!

The story revolves around Donny and his determination to win the NBC competition for the next great American band – the prize is fame and fortune. He hears about this just as he’s fired from his last gig; it’s his only hope to make it to the big time – to – as John Lennon says, “Get Back…Get back to where you once belonged.” Just as Danny Ocean rounded up his crew of misfits for Oceans 11, ok so that’s a stretch with George Clooney and Brad Pitt in the movie, but still they were odd men out just as the talented but damaged guys are in Donny Novitski’s band.

Love of course finds Donny along the way. He does the right thing looking up his good buddy’s widow and before long they are not looking into the past together – they are looking into each other’s eyes with more than friendship between them. Turns out, she can sing. And so, Laura Osnes (of Rodgers and Hammerstein’s Cinderella) finds herself becoming the singer for the band. Broken hearted and shy when first encountered, show biz suits her and soon she’s owning the stage. Love does triumph over all.

Bandstand has energy, grit, buoyant vitality (swing-style dance numbers that fill the stage), and yes, anguish too. It is toe-tappingly catchy? If you love the big band sound of the 40s, it will grab you. Do you leave the theatre singing and dancing? Well, you do leave admiring the talent of the terrific cast and thinking about how hard it is in life, no matter what the odds, to hit the top of the charts and become a huge success. So for sure, you’re applauding. 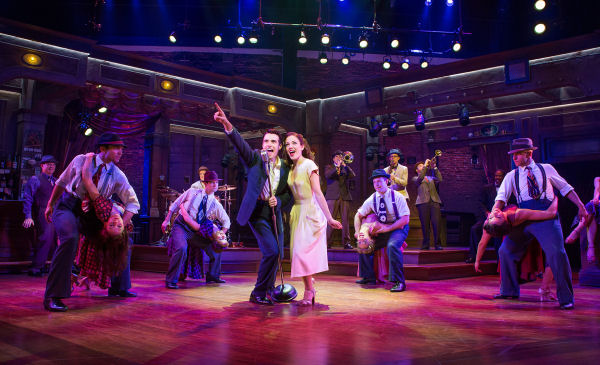 You can’t help but admire Donny and his band and buy into their anthem. Why? When about to be gypped by conniving lawyers, they find a way around a crooked contract. When the truth is almost too hard to bear, love becomes a bond too strong to break. When money seems impossible to find and dreams are about to be destroyed, the community comes through and the impossible is once again within sight. While at first the odds seem 1000% (if it weren’t a Broadway musical that is) against this rag tag bunch of supremely talented musicians sticking together and forming a band much less one with any serious potential for success, their luck holds and Las Vegas oddsmakers would surely be disappointed. Nobody it seems, can tell them NO!

The Tony Award-winning choreographer of “Hamilton,” Andy Blankenbuehler directs and choreographs Bandstand with book and lyrics by Broadway newcomers Richard Oberacker (who also is responsible for the 1940’s inspired score) and Rob Taylor.

“Band Together – The Broadway Veteran Project,” encourages individuals and organizations to sponsor tickets for veterans to see Bandstand by making a tax-deductible donation through Got Your 6, a non-profit that highlights projects that portray narratives about military personnel and their families accurately and responsibly. Bandstand is the first Broadway production to be 6 Certified by Got Your 6. To make a tax-deductible donation as part of “Band Together—The Broadway Veteran Project,” visit gotyour6.org/donate and note that you are donating in honor of “Bandstand tickets.”