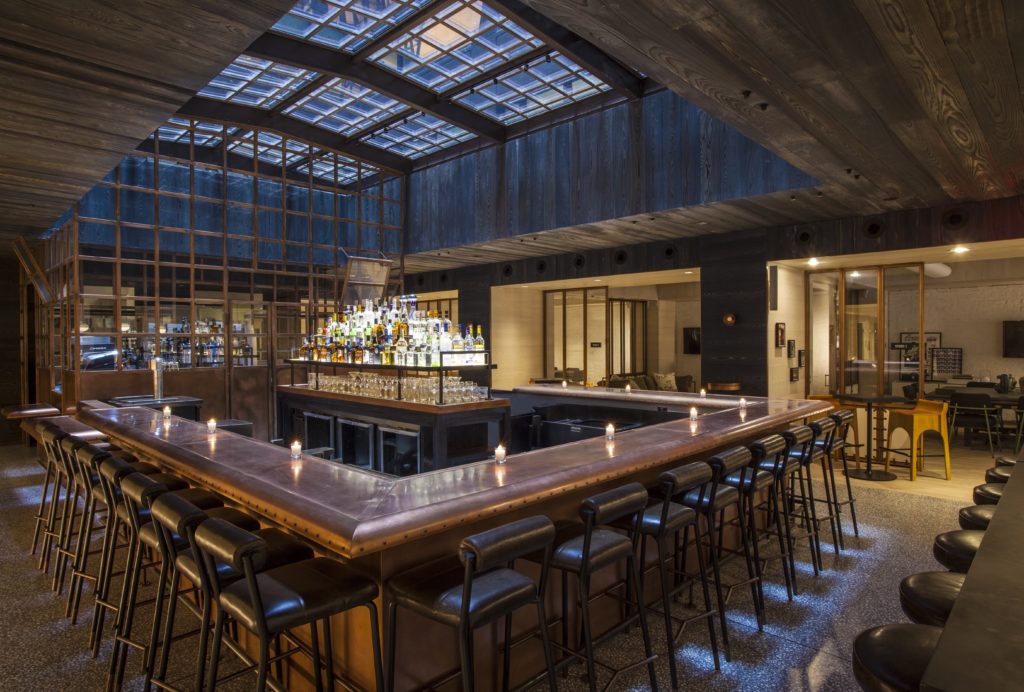 Sometimes you have to give up a little something to get something better than you expect in return. While there is nothing dreamier than staying at a five-star property with its all-out luxury, playfully glamorous mixology, and panoramic views of Central Park and Columbus Circle, travel to New York City often demands something a little more practical.

As real estate developer Mitchell Hochberg sees it, however, value (i.e. very appealing nightly rates by New York City and general standards) does not mean having to sacrifice style and big city cool. The “Moxy” concept, under the direction of Marriott Hotels & Resorts, borrows from business/ boutique hotel amalgams popular in Europe, especially with Millennial travelers who are both cost and style conscious. Although Moxy branded hotels are cropping up all over the U.S., Hochberg endeavored to make his New York outposts (as well as forthcoming lodgings in Miami and Los Angeles), just a bit more expressive and localized. 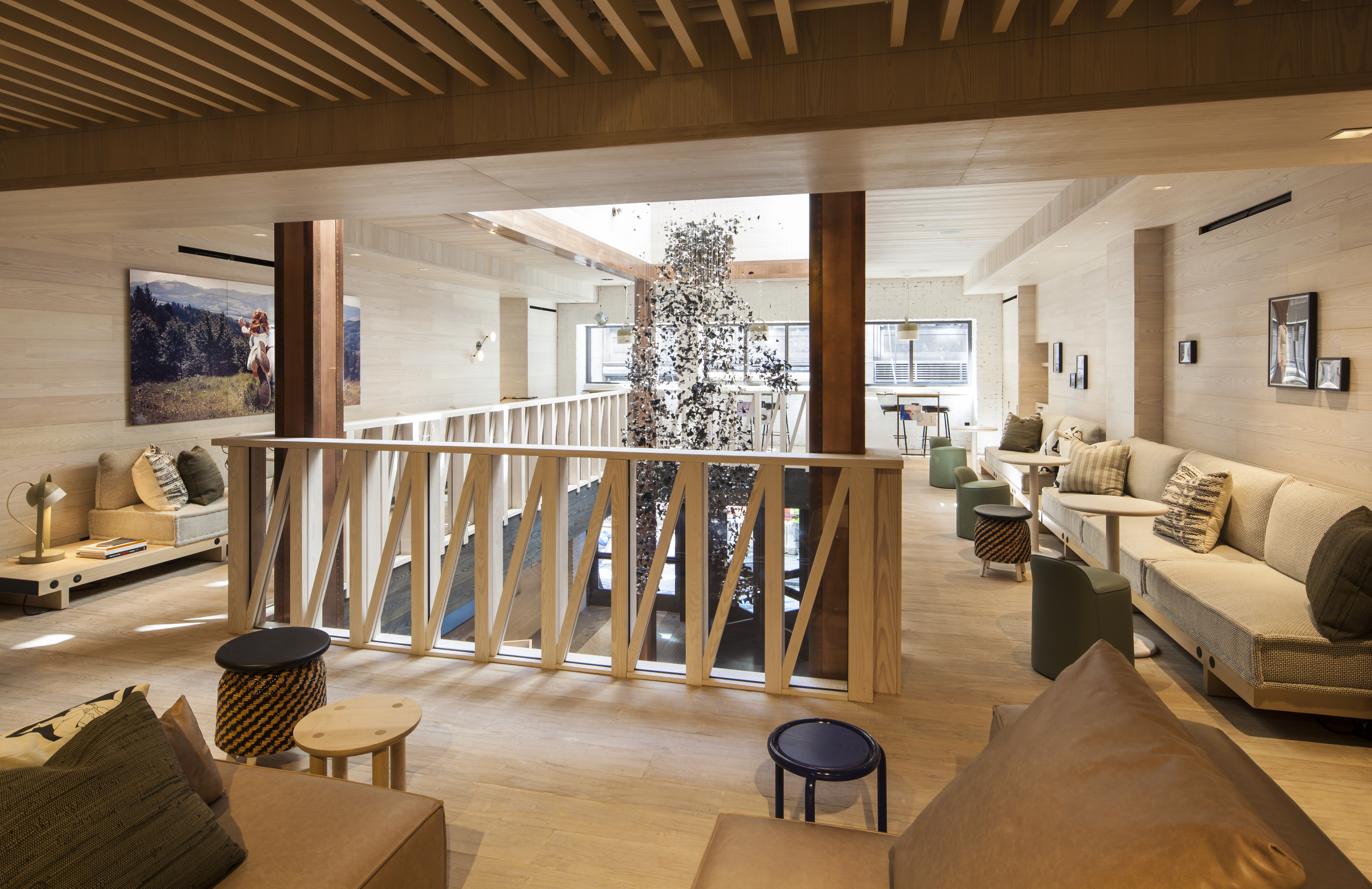 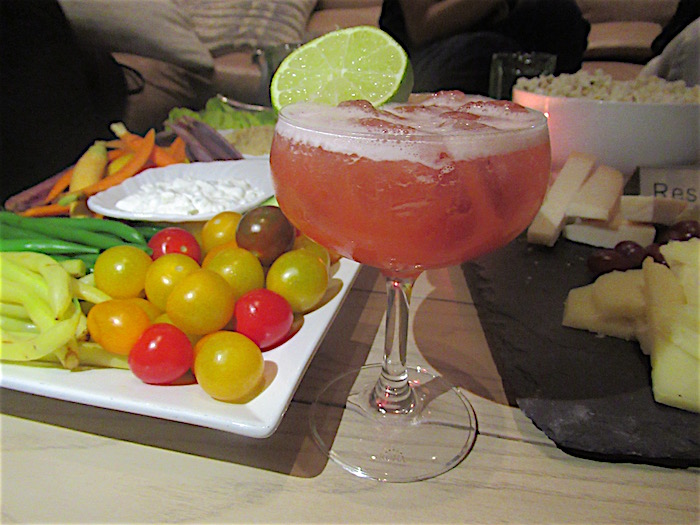 The Moxy Times Square (www.marriott.com/hotels/travel/nycox-moxy-nyc-times-square), which occupies a century-old building, has a fascinating history, including years as a residence for workmen responsible for laying the foundation of Manhattan’s skyline. However, Hochberg, who has endeavored to further customize his Moxy properties to their neighborhood settings, argues that having the 2nd-floor lobby (co-work space by day and chill lounge by night) outfitted with floor to ceiling windows brings the pulse of the Fashion District streets to the guests. Hochberg’s philosophy also involves people living and working in the neighborhood to make the public areas a regular hangout.

“We want a regular local clientele as well as visitors, as visitors want to mix with locals to learn about what’s actually hot in New York from a New Yorker,” says Hochberg. “In the year, we have found that people who live and work in the community regularly do go to the restaurants and Bar Moxy, which is the most important part of the public areas, and is in use all day from breakfast to happy hour and beyond.” 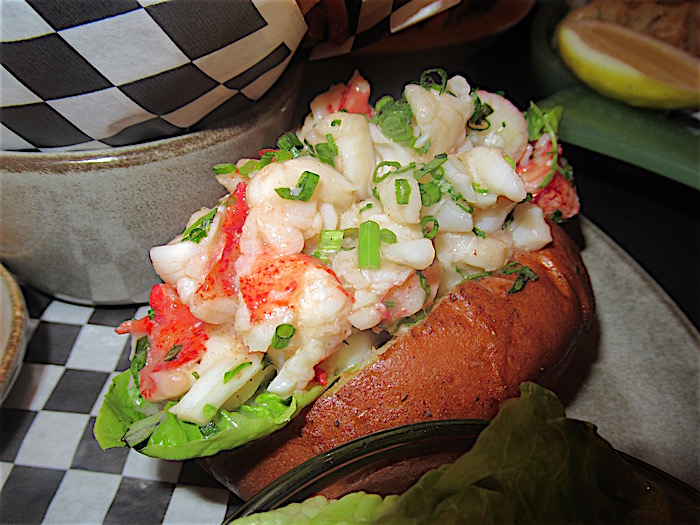 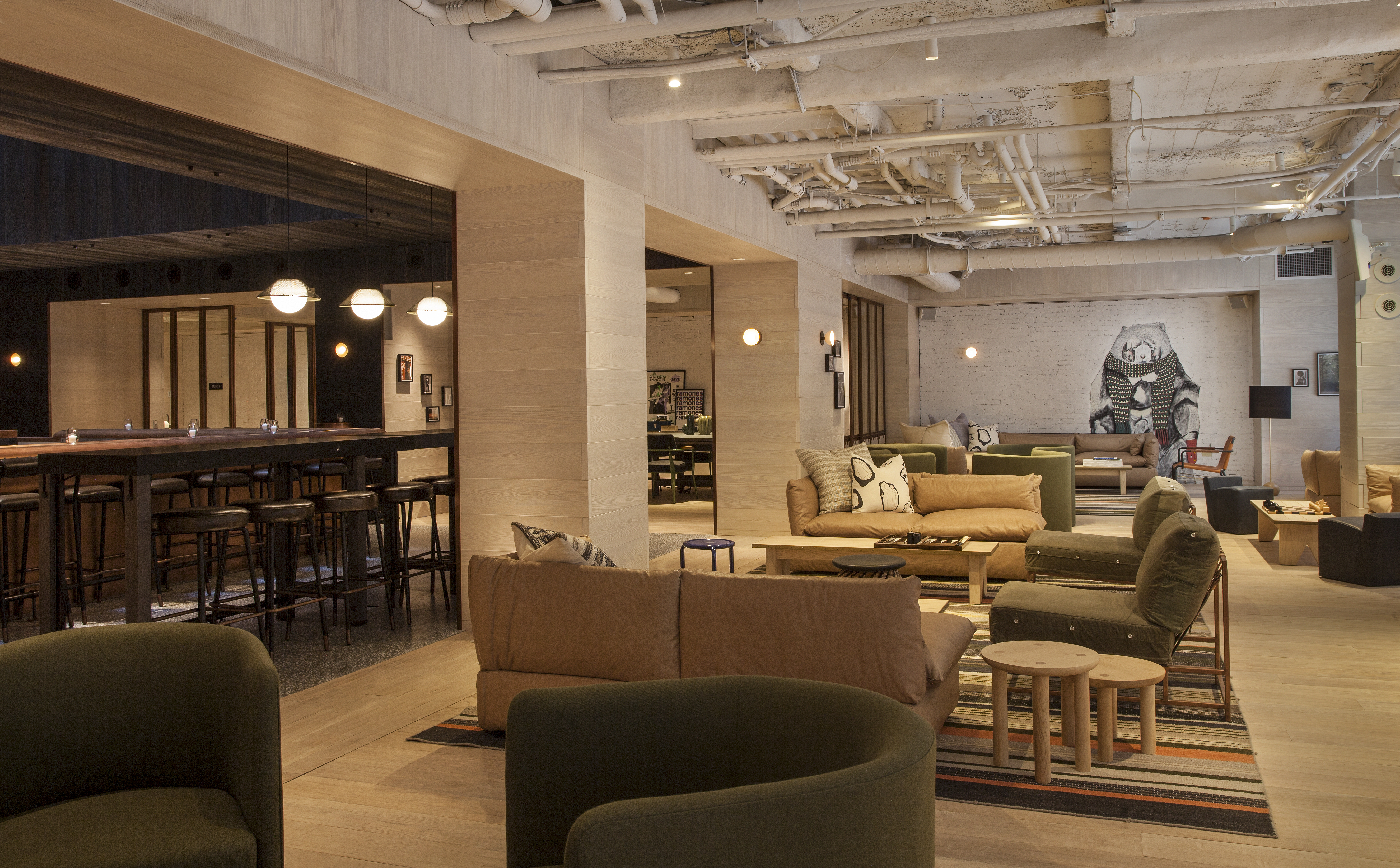 The Lobby Lounge can be all things to all people-shared workspace, neighborhood hangout, or a place for savvy travelers to see what’s on.

Considerable expense was invested in Bar Moxy, including luxe interior design materials such as higher caliber hardwoods, copper, and an atrium window ceiling. To keep things approachable, it is balanced out with an “urban camping” theme and modular furniture that can be adapted for any occasion from a casual business breakfast to post work and weekend gatherings when the DJ arrives.  The private rooms, which have an almost Scandinavian vibe (after all, the Moxy concept is imported from Europe), are small but easily adaptable to the way a guest arranges her belongings during her stay. The check-in skews “Millennial” and outfitted with a complimentary candy station/photo booth, oversized Jenga and Connect-Four games and a video wall inspired by old-time European train stations.

That said, Hochberg himself acknowledges that this touch of stylistic irreverence can be appreciated by people of all ages, and he’s not afraid to use the word “fun” to explain how what he has envisioned has been brought to life. Rooftop bar Magic Hour, which draws block-circling lines even on a weeknight, draws a mixed-age crowd. On Sundays, it also serves an interesting and healthy brunch, and you can’t beat having the Empire State Building and a cheeky mini-golf course in the background. 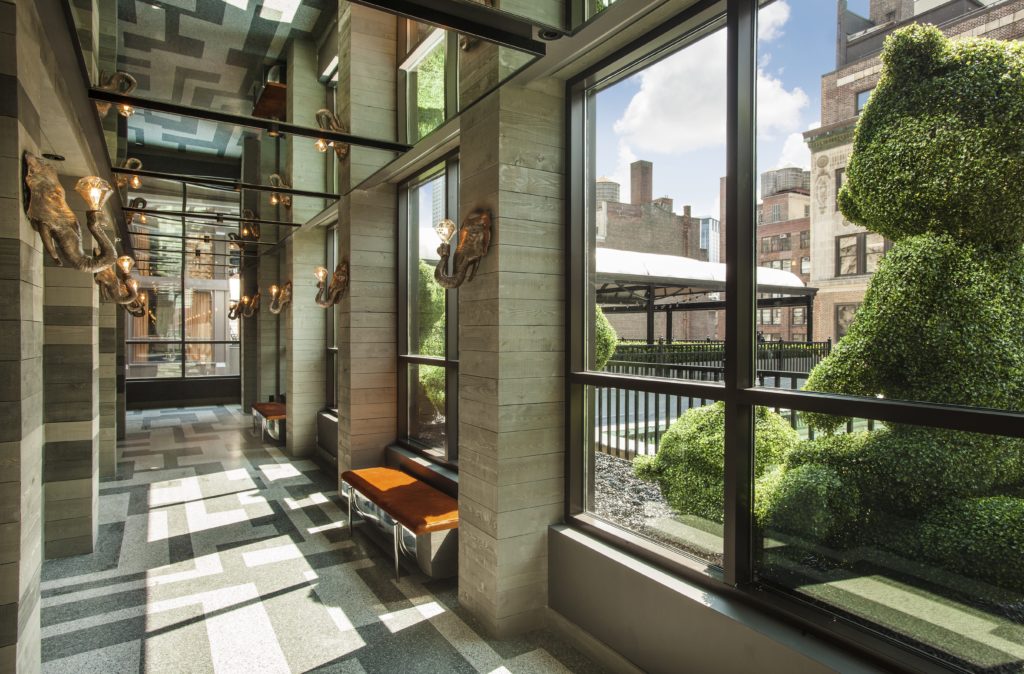 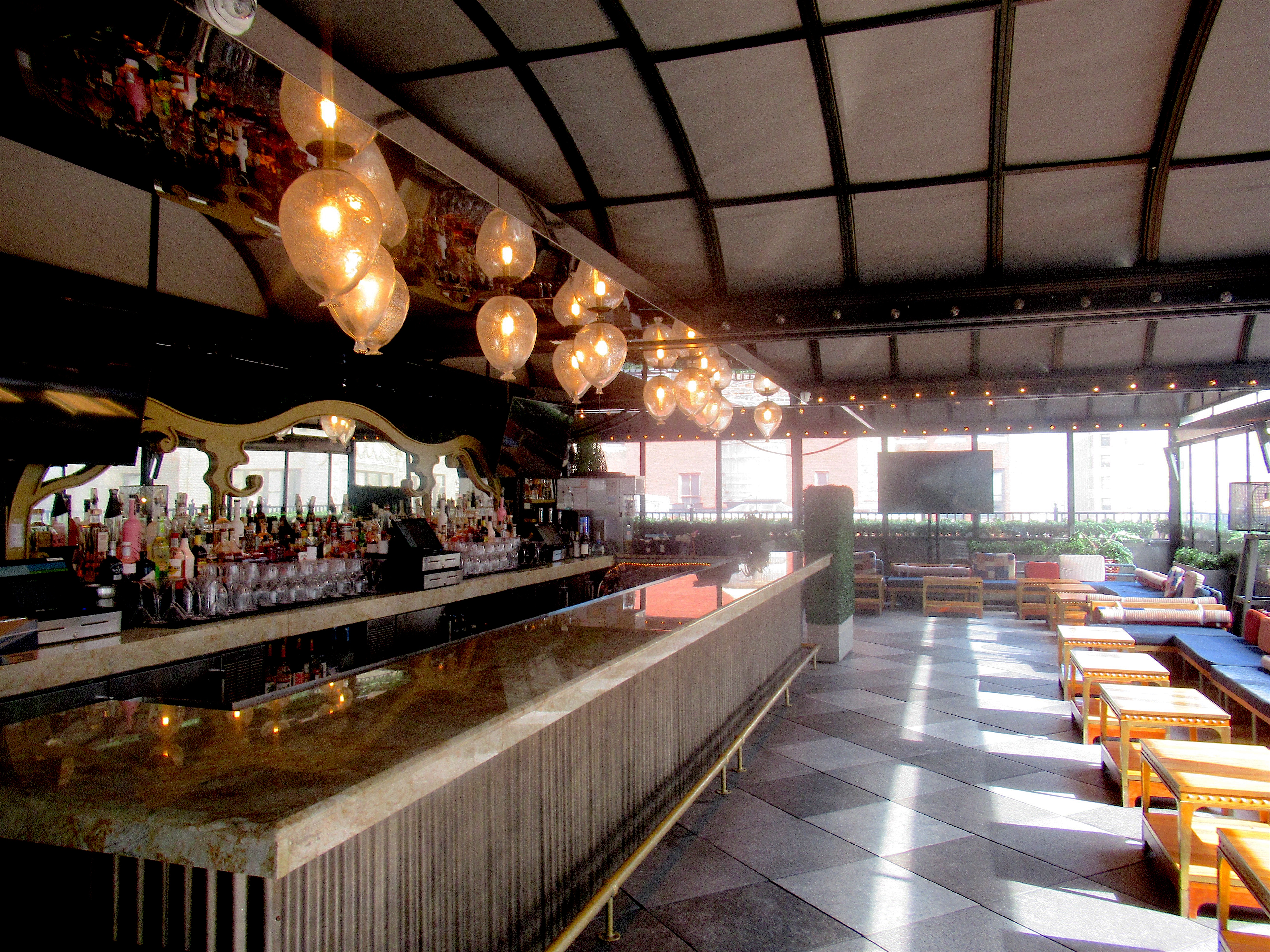 “Let’s do something that’s fun, that’s almost like an adult amusement park,” he explains in how the concept for Magic Hour came together. “Everything you see comes from that inspiration, even the terrazzo floors are laid out in a maze. The funhouse mirrors at the entrance, the elephant wall sconces, cheeky bear topiaries, and mini golf. You are supposed to laugh and know this place, with its retractable ceiling and carousel seating, is supposed to be fun.” 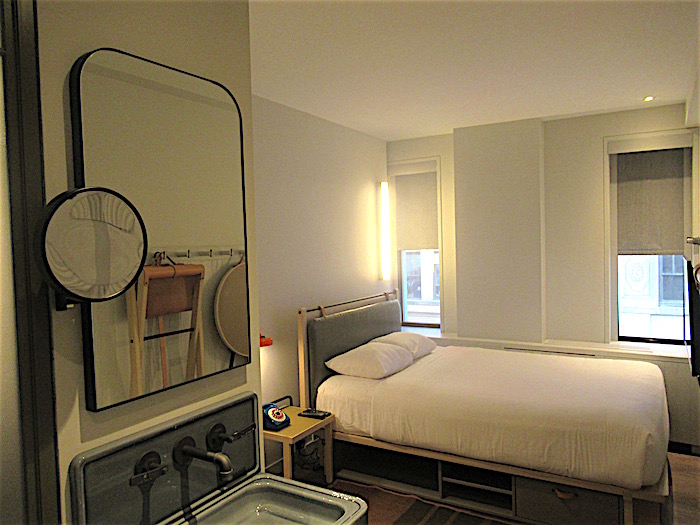 Mod modular: Form and function in a typical guest room.

Light-hearted menus and accessible style extend to both Bar Moxy and main brasserie-style restaurant Legasea, which offers comfort food with a contemporary twist, a selection of healthy (but not boring) salads and mains, and crafty cocktails. This comes as no surprise when its revealed that noted restaurant group TAO had a hand in the development of the menus.

“We wanted to create a menu for Legasea that doesn’t take itself too seriously, has some solid favorites (a good steak, tuna tartare) but also have fun with regular and seasonal food items,” says Executive Chef Jason Hill. “As a chef, since we have so many different concepts within Moxy, such as Legacy, Magic Hour, EggHead, and Bar Moxy, I get to flex a lot of different muscles in coming up with ideas for the different menus. We have to come up with items for breakfast, lunch, dinner, private events and things that people can eat any time of day. The challenge is to broaden the perspective so the concepts can live separately and together under one roof.” 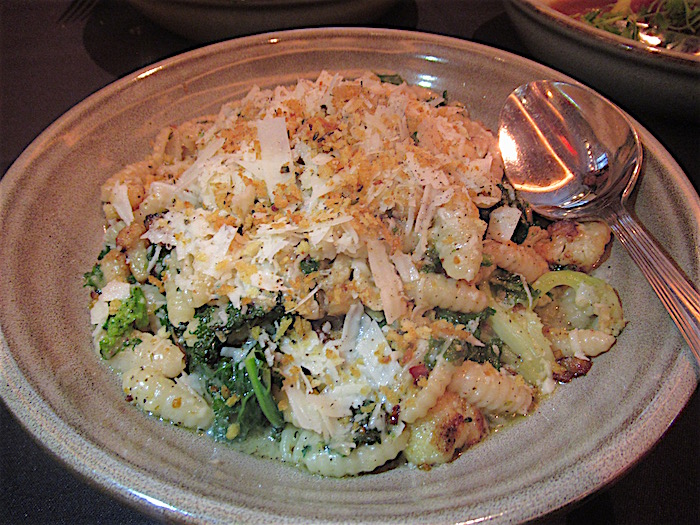 If you haven’t had enough of that TAO showmanship, you’re just a short distance from TAO Downtown, which has transitioned from ultra-hip destination to staple but never fails to please with its sweet sculptural cocktails and lavish Pan-Asian dishes (pro-tip: appetizers rule). But if you are looking for more places like Moxy Times Square, you are in luck. The Moxy Chelsea Hotel will be in full bloom in early 2019, and in keeping with the surroundings of the Flower District. Future guests can look forward to a whimsical year-round garden setting anchored with an Italian/Roman restaurant and a donut-making machine that will greet them every morning. 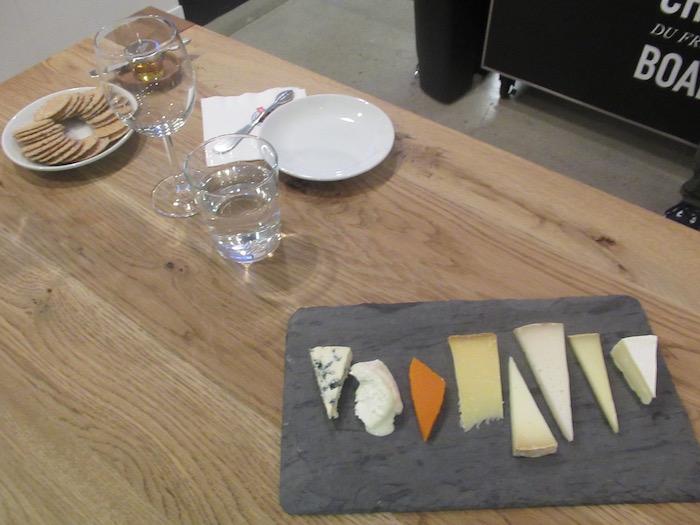 A cheese-tasting session with the season’s best selections.

When is a cheese shop something a bit more interesting? When a national institution—The French Cheese Board—takes over a prime storefront in one of New York City’s trendiest areas. Its mission is to immerse New Yorkers and visitors into French culture—and cheese cultures in particular—with a shopping and tasting environment that is at once both chic and informative.

“We collaborate with dairies in France to educate the American public about the products,” says Adelaide Pacton of the French Cheese Board.“They can experience how cheese figures into the French diets, how they are made, and the differences from region to region in France.”

Tasting sessions and classes make the shop is a hidden gem for small business groups, as do pop up events with various chefs, French cheese artisans and food experts, which can be tracked on its website 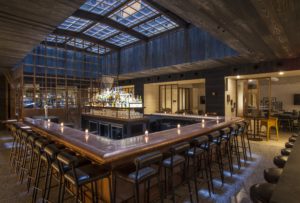 (Frenchcheeseboard.com). Amid the informative displays are handy accessories and gadgets to enable anybody to serve their cheese purchases à la françaiswhen entertaining.