AIN’T TOO PROUD
The Life and Times of The Temptations
At the Imperial Theatre, 249 West 45th Street 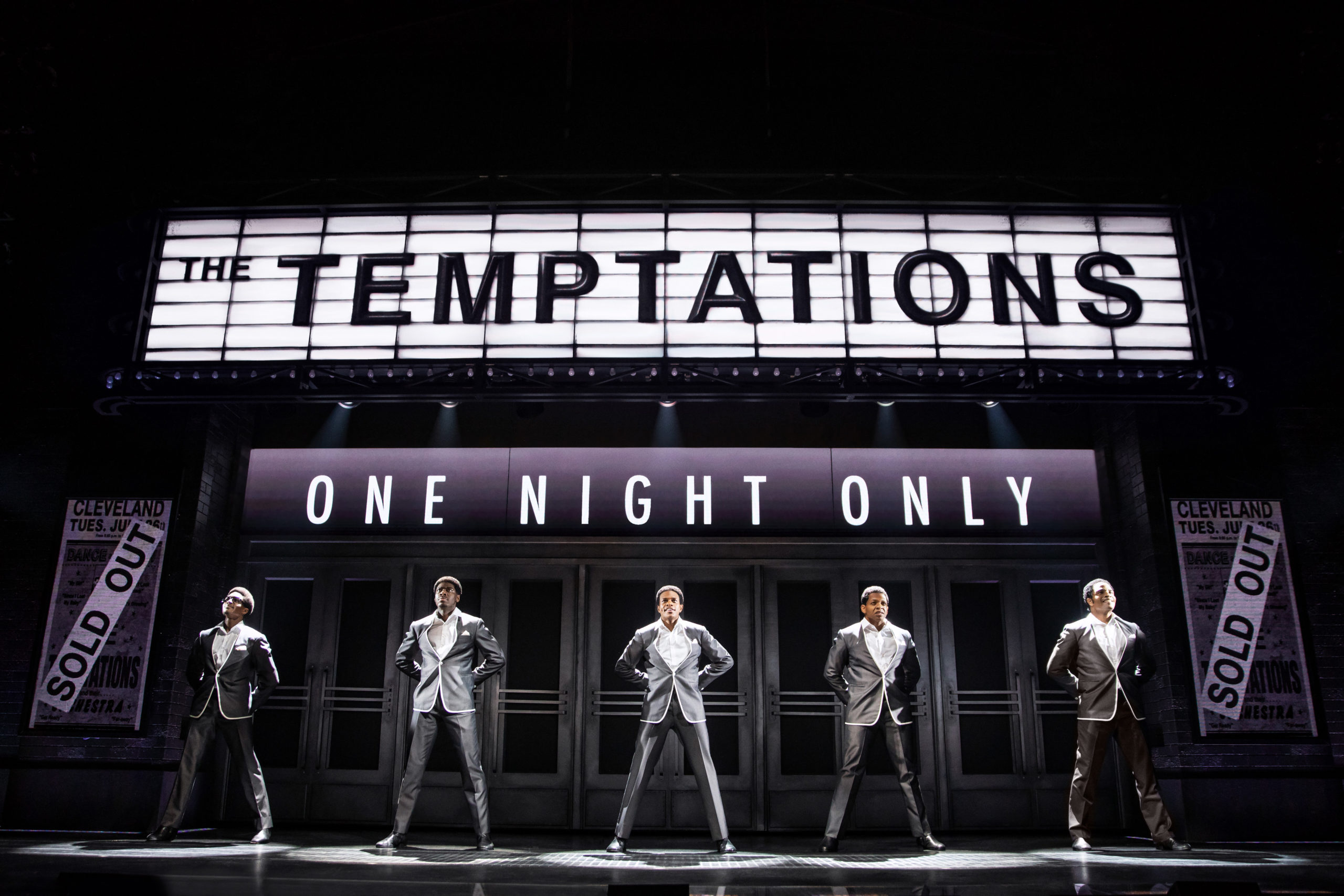 From the streets of Detroit to the Rock & Roll Hall of Fame, AIN’T TOO PROUD electrifies us as we become engrossed in the rise and fall of The Temptations, the mighty Motown hit machine. This new jukebox musical which broke house records in California at Berkley Rep and in D.C. at The Kennedy Center, arrives on Broadway this Spring with irresistible life. It’s only natural to want to sing (and probably dance too) along to favorites including “Ain’t Too Proud to Beg,” “Get Ready,” “If You Don’t Know Me by Now,” “I’m Gonna Make You Love Me,” “War” and of course, “My Girl,” among the 31 songs in this show that never stops moving or dazzling. 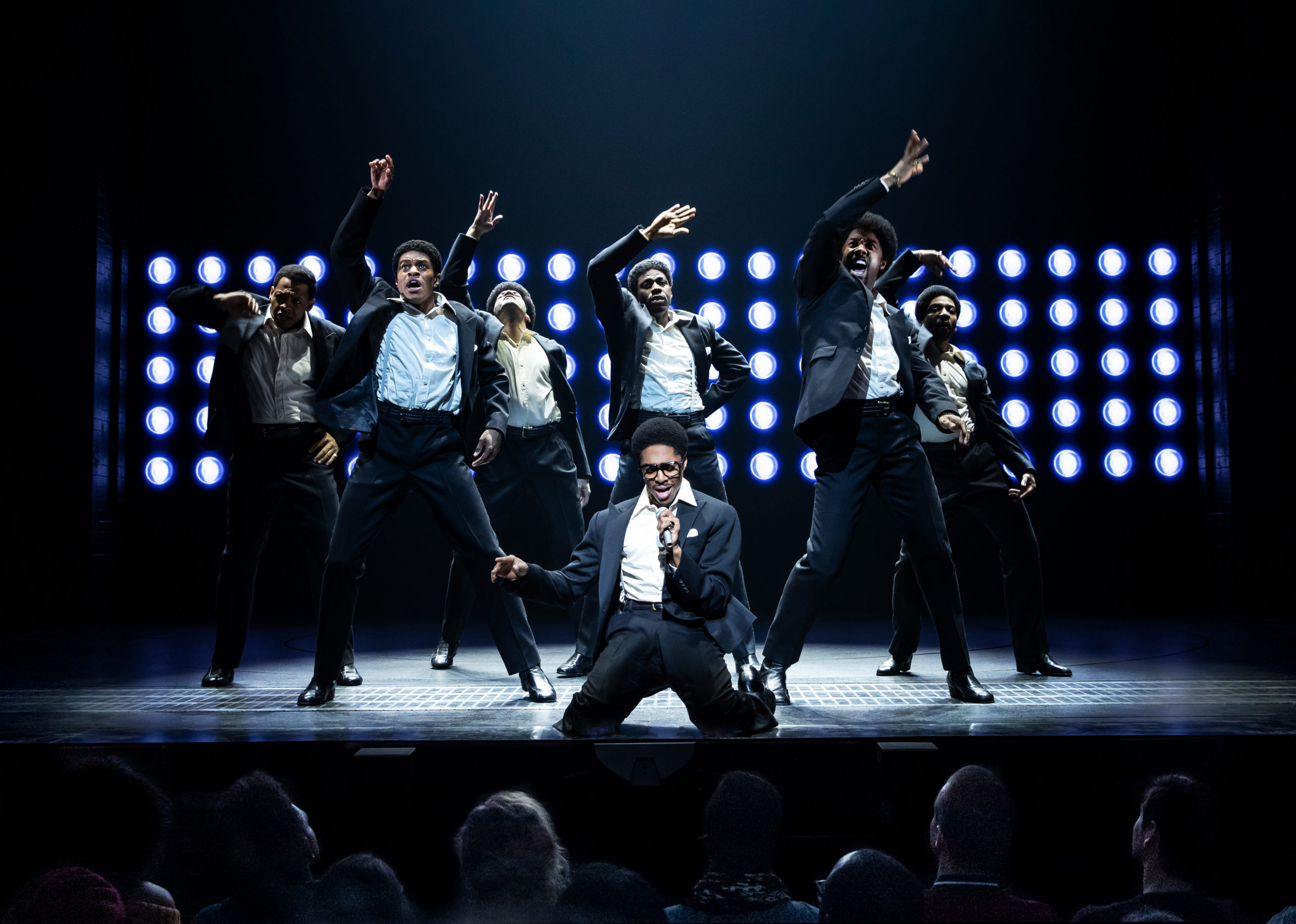 Sergio Trujillo’s choreography does more than recreate this group’s signature dance moves, it reinvents them brilliantly lifting this jukebox musical into another realm.

ONSTAGE AND OFF: THE UPS AND DOWNS

The story takes us through the ups and downs, onstage and off, entertaining consistently as we learn how this fab five met, the groundbreaking heights they hit and how personal and political conflicts threatened to tear them apart as the United States fell into civil unrest. 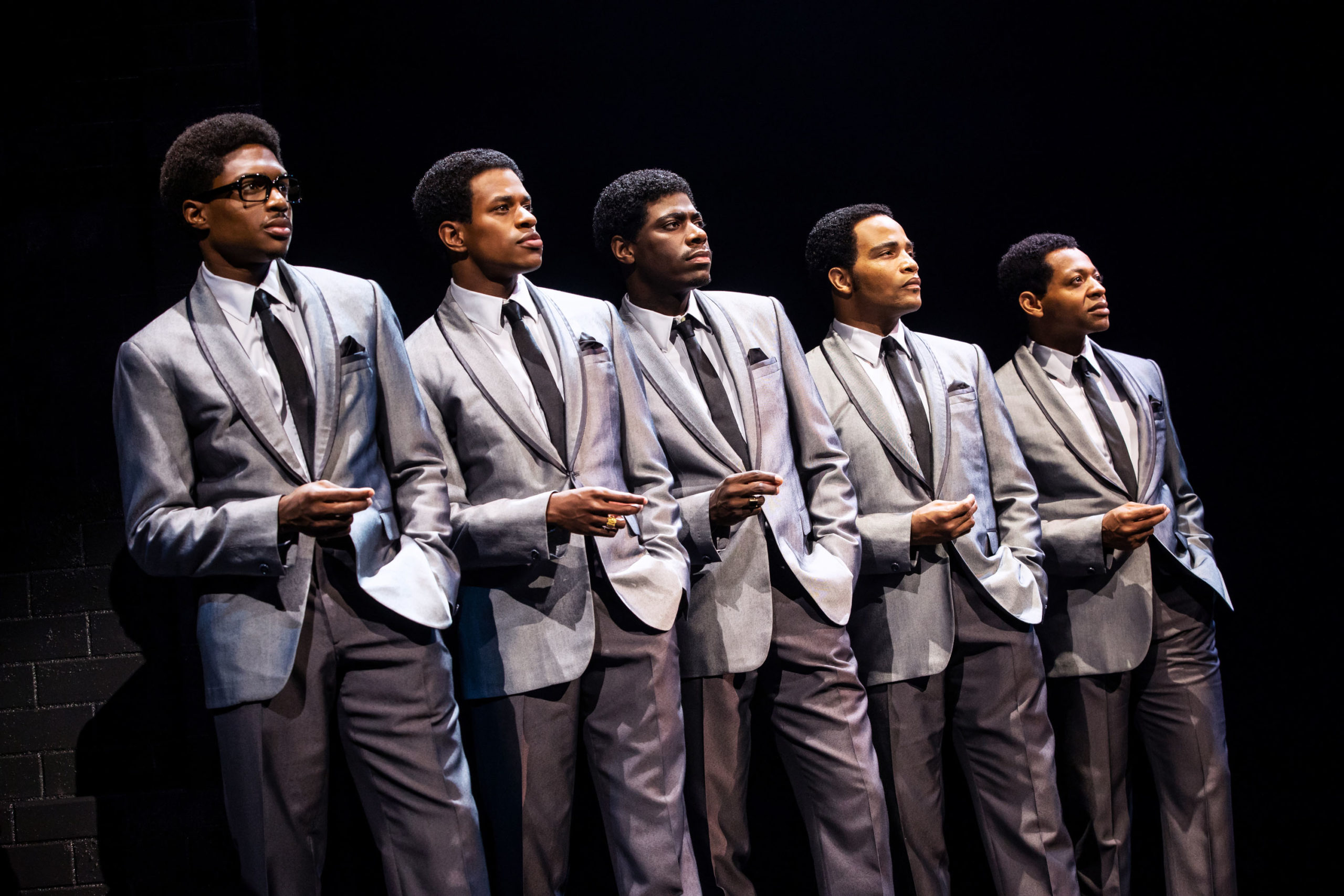 It wasn’t all harmony within The Temptations. The difficult relationship between two of the five “classic” Temptations, Otis Williams (played by Derrick Baskin) and David Ruffin (Ephraim Sykes), becomes the center of the show, with Baskin serving as the far from volatile narrator. (The 2012 memoir by Williams, the last survivor among the original group members, is the basis of the musical.) Sykes’s intense, ego-driven Ruffin struggles with the dictation of the group’s homogeneous style and Williams demand for shared credit — an issue that plagued the group, with 24 men rotating through over the past six decades. Despite the simmering internal conflict, The Temptations produced 42 Top Ten Hits with 14 reaching number one, many written by Smokey Robinson and Norman Whitfield. 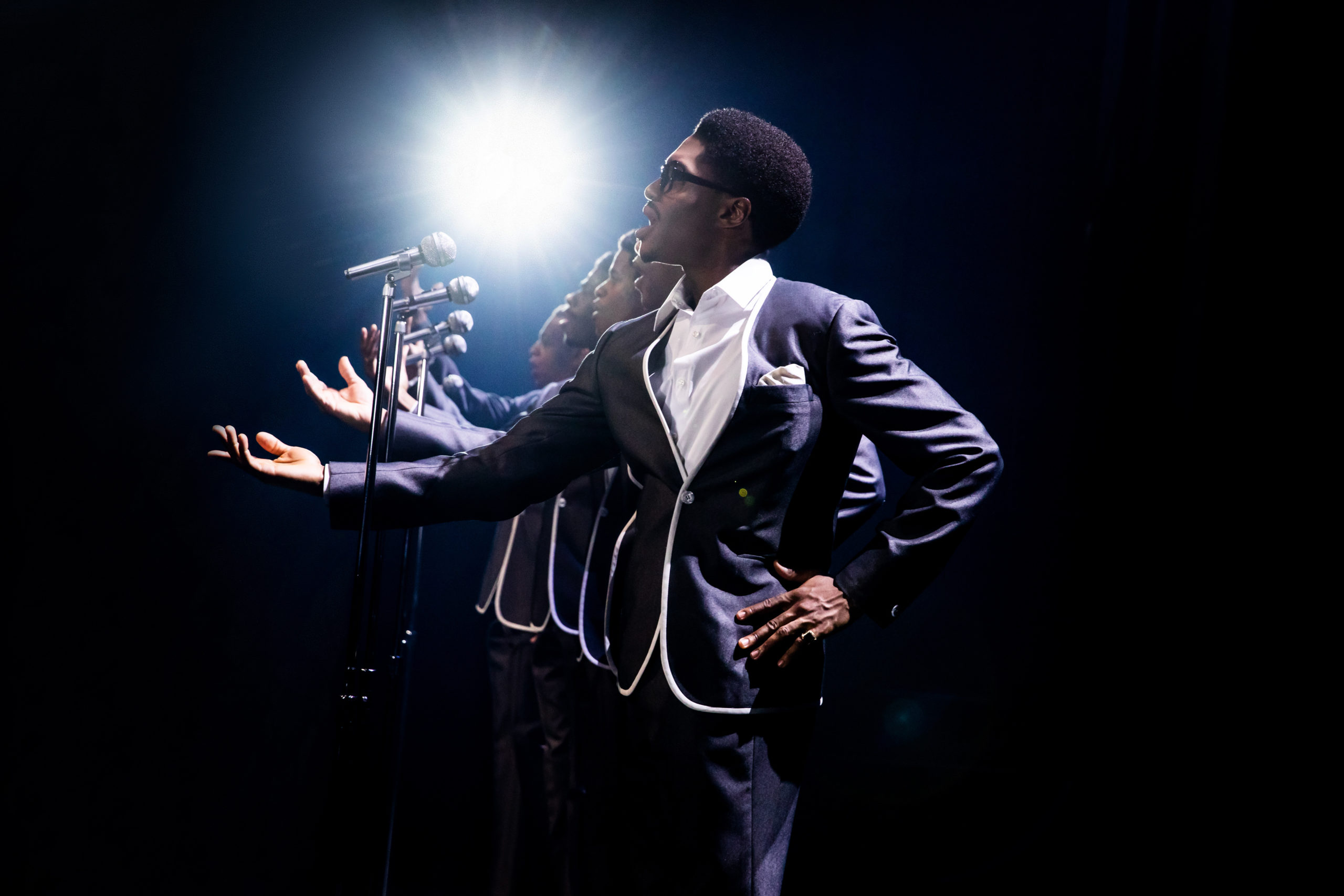 AIN’T TOO PROUD is a story of brotherhood, family, loyalty, and betrayal. Smooth though their sound was, turmoil raged behind The Temptations seemingly slick façade. Their success was extraordinary and they were for a time a worldwide sensation (the show takes us from their start in the 1960s to 1974) but it’s lonely at the top and as we see in this exceptional and exciting show not so easy to sustain success. 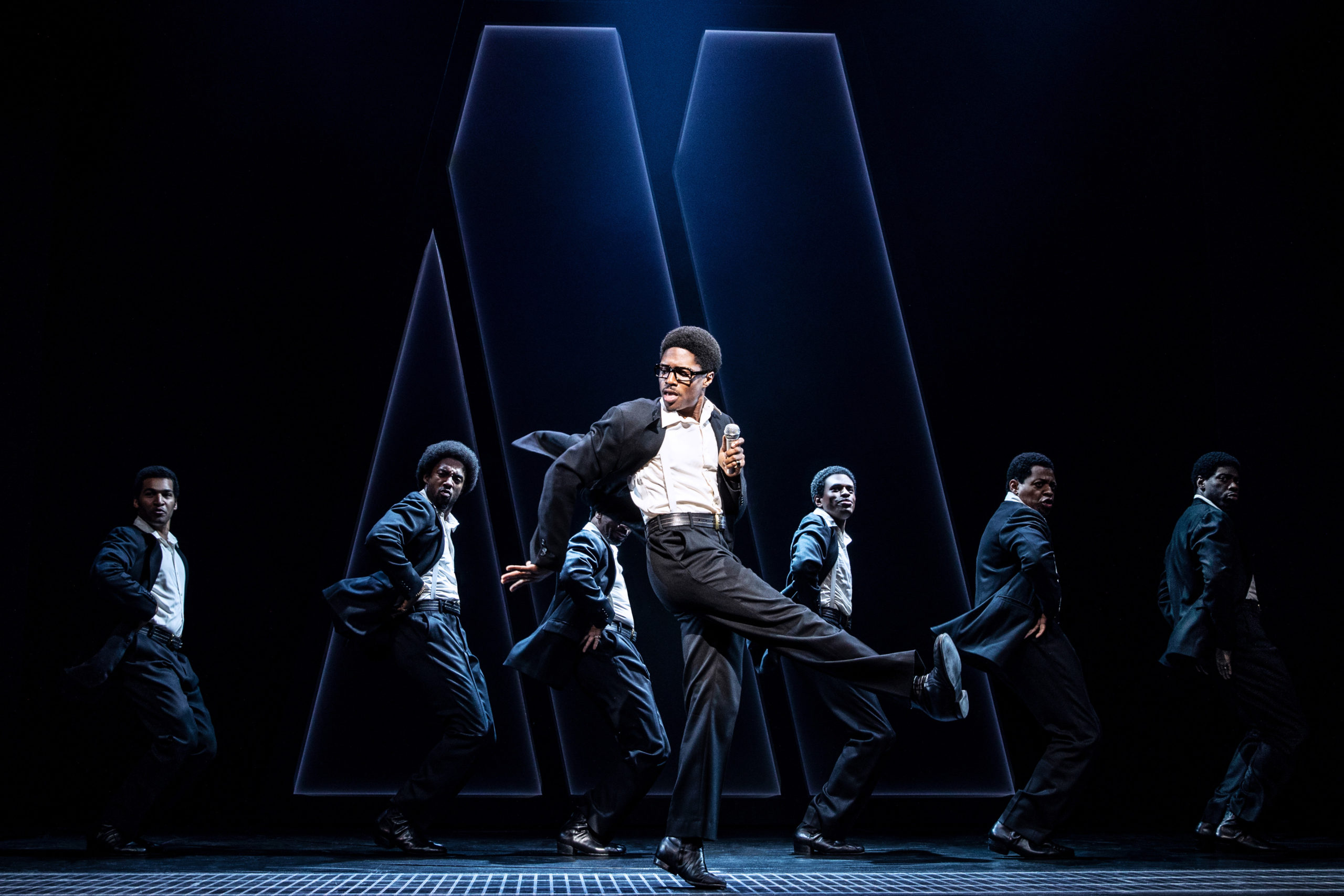