She shimmies! She sizzles! She rocks! Her energy brings the audience to its feet. Who else could this rock’n roll icon be but the one and only Tina Turner? Adrienne Warren IS Tina in this bio-musical overflowing with Tina’s hits, “River Deep – Mountain High,” “Let’s Stay Together,” “Proud Mary,” “We Don’t Need Another Hero,” and of course, the mega chart-topper “What’s Love Got To Do With It” – among 20-odd other Tina tunes we just can’t ever associate with anyone else. Though it’s true there is only one Tina for an evening we suspend disbelief and believe that Ms. Warren actually is the rock icon we love so well, she is thrilling to watch, literally you can’t take your eyes off of her. 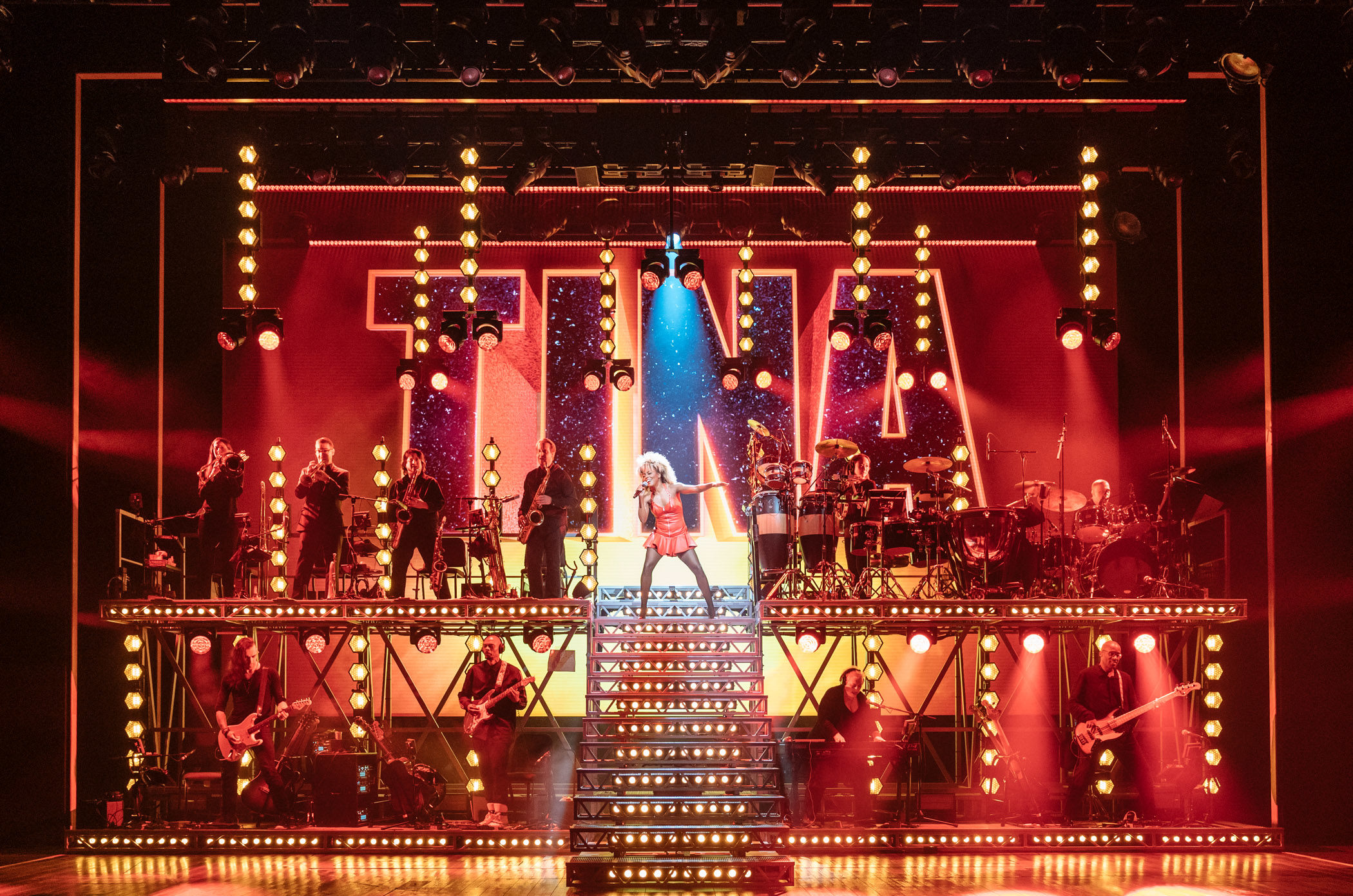 The story (book by Katori Hall) begins with Tina as a child in Nutbush, Tennessee (the origins of “Nutbush City Limits”). We see her gospel roots and share her early heartache as her mother, in a violent marriage (foreshadowing Tina’s relationship with Ike), takes off leaving her behind to be raised by her abusive father and her grandmother (played by Myra Lucretia Taylor). Tina’s mother Zelma is not a character who is easy to love yet Dawnn Lewis (Grammy winner, actress, Veronica Mars, A Different World, Major Crimes) makes her as sympathetic as she can be: “There are two sides to every story, it would have been easy to paint Tina’s mother as a villain but no, I wanted the audience to feel her humanity and see that she just didn’t know how to love this daughter. She knew that to survive to she had to protect herself before she could protect anyone else. Tina’s childhood mirrors my own so naturally I felt a tremendous empathy for her and for her mother too, having to make painful choices.

“Times have changed now and there is more awareness of a climate of violence towards women, and less tolerance. But back then divorce wasn’t common and women were told to stand by their man, no matter how many times he hit her. I never knew Tina’s mother,“ Dawnn Lewis reveals, “but I had friends who did. The character as I play her is grounded in reality, she is a divided woman yet I sought to bring compassion to her. No one is all good. No one is all bad. When I had a brief moment with Ms. Turner on opening night, I let her know what an honor it was to play her mother. It was such a compliment when she told me my performance was ‘lovely’.” 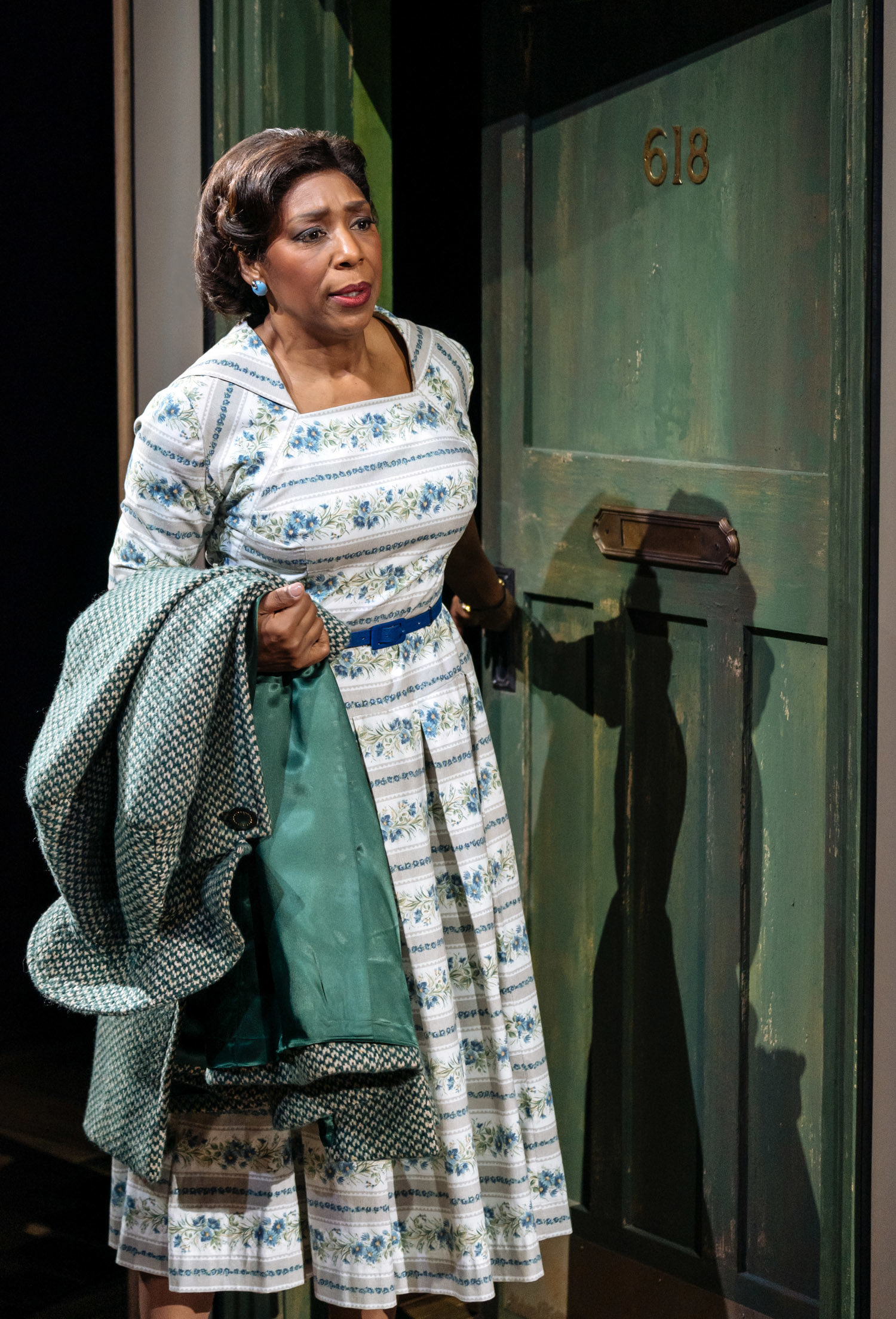 Tina tries to come to terms with her mother in one of the show’s most moving scenes. As she asks the parent who deserted her – why? Why she never deserved the love she desperately wanted? Dawnn Lewis as Tina’s mother replies, “You can’t hold fire. You can’t embrace fire.” And yes fire is a great way to describe Tina’s will to be, as her song says, “simply the best. Better than all the rest.” Daniel J. Watts plays Ike, one slimy Svengali, he soon shows his sadistic side just missing her with a cymbal in rehearsal, a move that Tina shrugs off, “he’s just passionate.” As Tina’s talent begins to shine and she becomes the star he’s hitched a ride on, his rage deepens and the abuse escalates. But Tina’s spirit is never defeated and her talent triumphs in the end. The songs propel the narrative, biographical and authentic. When Ike proposes Tina (Adrienne Warren) sings and her mother echoes the irony in the message, “Better Be Good to Me,” a plaintive cry from Tina and a warning from her mother that Ike never heeds.

But for all the adversity, Tina does more than persevere, she beats the odds in the end, making those millions and finding a man who needs no threats in order to be good to her. The show takes us through her personal journey using the songs to bring out Tina’s perspective as she keeps on “rolling,” like Proud Mary.

Depressed, down and out in London feeling unsuccessful at resurrecting her career, she sings “I Can’t Stand The Rain,” the weather was never more exquisitely painful. Our hearts go out to her, feeling the agony of defeat but we know Tina, and we know no one can keep her down, not foolish producers who cannot recognize her talent, not husbands who won’t stop till they have beaten her bloody, not a mother who abandoned her when she needed her most, not empty-faced men watching their “Private Dancer,” nothing deters her from becoming the sexy, strutting, absolutely dazzling star that Adrienne Warren creates of Tina who executive produced this $16.5 Million musical. 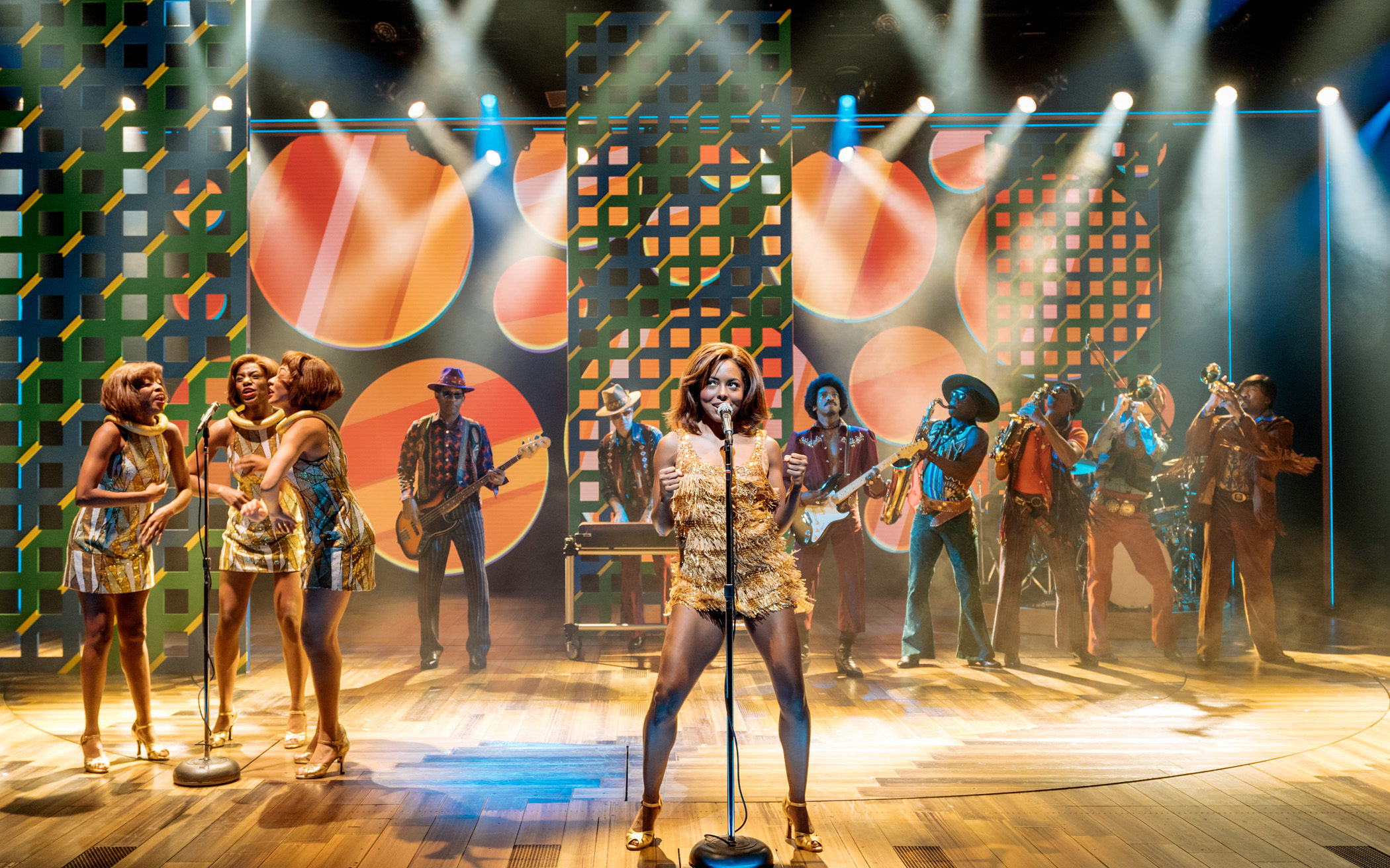 Despite her initial misgivings about the song that re-defined her and brought her back into our orbit, “What’s Love Got To Do With It”, she abandons her gig singing disco in trashy dives for a shot at re-found success with a new spin on music she makes her own. Her commitment to Buddhism stands behind her and sustains her, as she leaves the past behind, she places her trust in a man who becomes her husband, German record executive, Erwin Bach (played by Ross Lekites.)
Once in the hands of Phil Spector (Stephen Booth), a hit maker producer par excellence, her career ascends and the dark shadows of the past begin to fall away. The show takes flight in the second act when Tina rises from the ashes of her burnt career, powerful, older and wiser ready to assume the mantle of stardom even if such success doesn’t appear to immediately be in the cards.
Tina: The Tina Turner Musical ends gloriously, we are with her as she takes the stage; a superstar who has been through hell to ascend to heaven. Adrienne Warren as Tina delivers a performance that brings the audience to its feet. We feel like we are part of the crowd of thousands upon thousands at her concert in Brazil, begging, screaming for more encores, soaring with her to heights never imagined. Honestly, I’m still there, waiting for one more song.

Tina: The Tina Turner Musical is at the Lunt-Fontanne Theater. For more information https://tinaonbroadway.com/

TEMPTATIONS TELL ALL SPINS BROADWAY MORE THAN ONE NIGHT ONLY