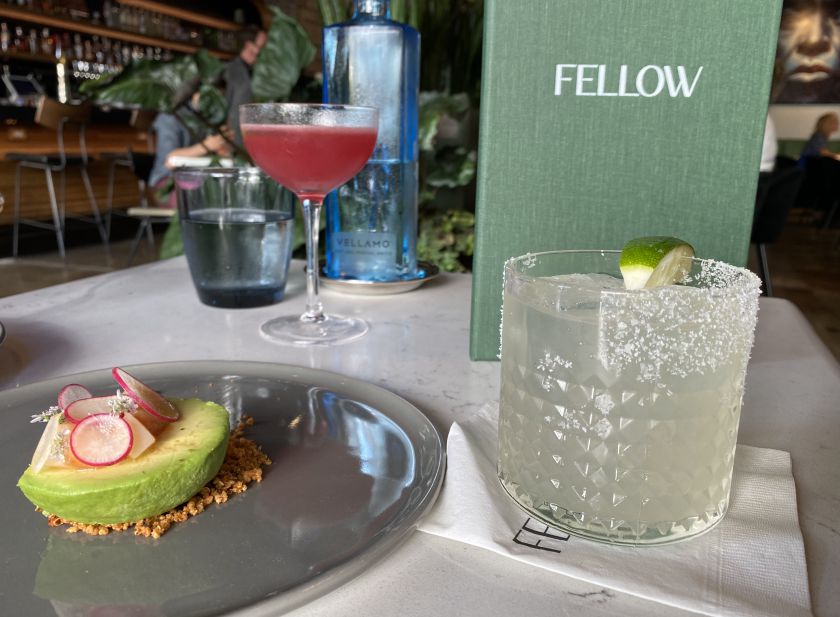 Back in 2017, Los Angeles restaurateurs Philip Camino and Terry Tolba opened Fellow, which instantly garnered a buzz for its locally sourced artisanal vegetables, sustainable seafood and Executive Chef Chris Flint’s imaginative menu. Now, as things re-open in L.A. in 2021, it’s truly “back to class” for Fellow.

Fellow’s welcoming space is situated in a beautiful two-story 1930s building and outfitted with bright, airy and modern furnishings as well as an adjoining art gallery. It may be located in Westwood, the heart of UCLA’s “territory,” but it’s unquestionably a date night or business lunch destination for selective but adventurous diners thanks to its latest menu, flawless service and contemporary elegance. The décor, meanwhile, is an inviting departure from familiar L.A. restaurant interior design themes such as “Zen,” “Mid-Century Modern,” and “beach house.”

Asian and Latin culinary influences abound in the menu descriptions of the sharable plates, elevated bar food and refreshing cocktails. The twist at Fellow is that what arrives at your table is original and yet approachable, straight forward and executed with balanced texture and flavor. Highlights on the savory end include Tempura-Fried Maitake Mushrooms and Striped Bass and Hamachi “Crudo’ starters and Poached Striped Bass and Seared Duck Breast mains. The dessert list is short, but sweet, with three sculptural and decadent riffs on rice pudding, pistachio cake with cherry sorbet and a complete rethinking of the ubiquitous chocolate lava cake (called “Butter Mochi,” overflowing with dark chocolate and dolce de leche).

The signature cocktail list is relatively short, yet Adam Fournier (the 2021 USBG/Diageo US Bartender of the Year Bar) has something inspired for every thirst, as well as a zero-sugar selection (“You Had Me at Fellow,” house-made with monk fruit-sweetened Orange vanilla soda) that can be done spirits-free or fully-loaded. On a list where every cocktail is delicious, the Bellona (gin, florals, sherry, seltzer), Fields of Barley (rye, mash bill syrup, bitters and citrus zest) and the Miami Vice Milk Punch (a tightly guarded recipe) are standouts. Sommelier/Beverage Director Scott Lester applies experience defined by his top tier resume (with past stints at The French Laundry in Yountville, CA; The Restaurant at Meadowood in St Helena, CA; and Eleven Madison Park in New York, New York) to this innovative beverage program.

For these reasons and more, meeting planners will want to bookmark Fellow as a must-do L.A. meeting destination. Beyond the food and drink, the venue offers assistance from its own in-house event planning, custom curated menus and cocktail/wine pairings, and several indoor and an outdoor space to suit every kind of gathering. 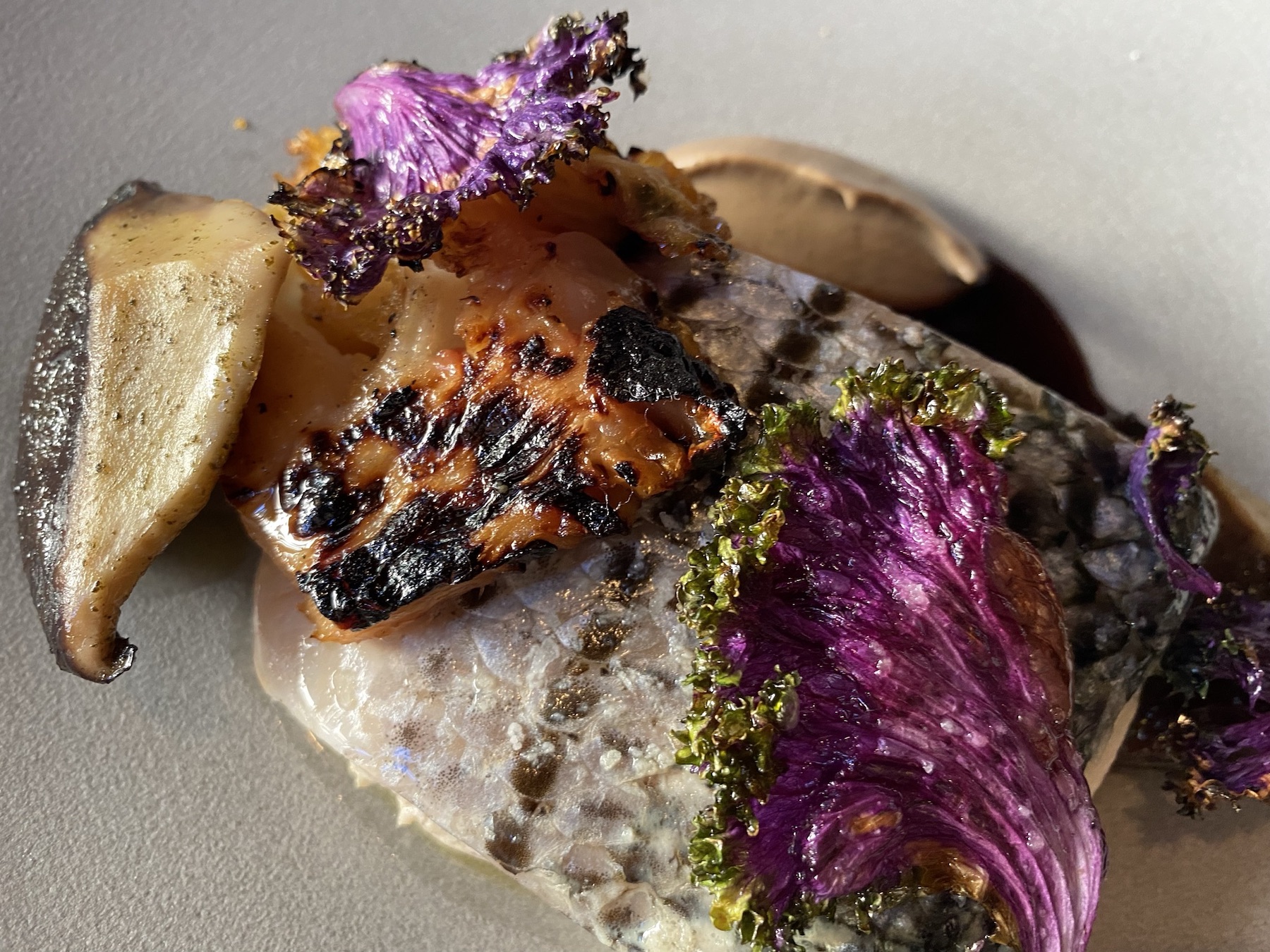 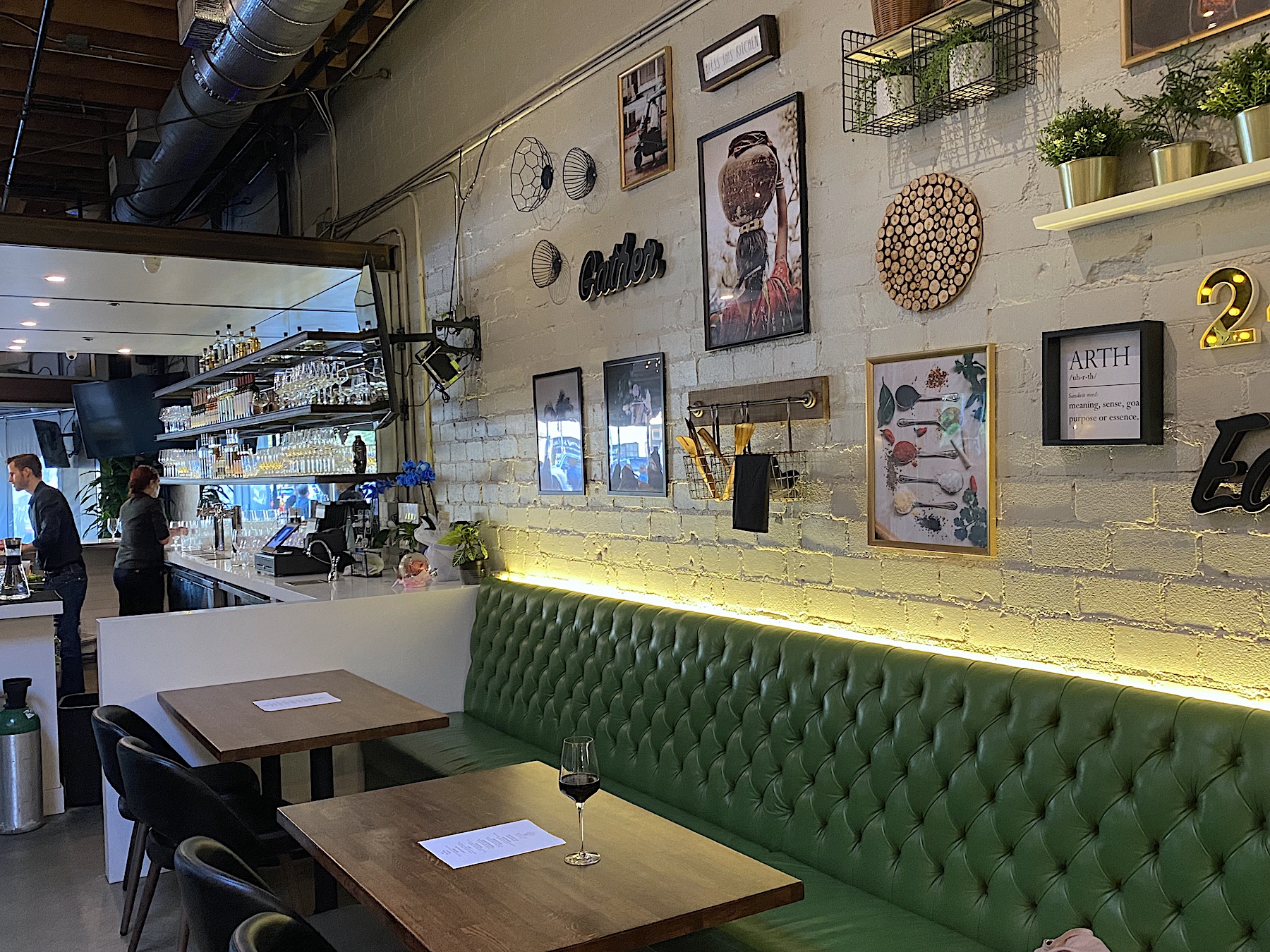 Arth’s open concept interior, meanwhile, extends from the kitchen to the front of the house and forward into a charming sidewalk-grazing patio. Under Lad’s direction, they have a decidedly minimalist feel rather than a big splash of color through the illustrations and sculptures referencing Hindu motifs, gods and legends in other Indian restaurants at all price points. The decorative items are mostly confined to a wall next to the bar placed in a collage-like fashion, that nod to Indian ideas and traditions in a more subtle way. Clearly, the intention is for the cocktails and food to be front and center, and beautifully framed without too many distractions.

You can also expect the unexpected when it comes to the mains and curry dishes (partnered with naan, baked in the visible tandoori oven right before your eyes). Crowd pleaser palak paneer is reworked into Palak Paneer Ke Kofte (spinach coated paneer balls in sauce), Baghare Baingan (where the eggplant is deep-fried and lavished in peanut sesame gravy and Butter Chicken Dilli Wala, (Tandoor-cooked boneless chicken in creamy tomato sauce) and some lamb dishes that will be completely new to you no matter what you’ve tried elsewhere (Lamb Kosha, slow-cooked Australian lamb leg in onion tomato masala, and Kashmiri-style Lamb Yakhni Biriyani with yoghurt sauce).

The simple but well-curated bar turns out several beautiful flavor-forward cocktails with just the right amount of Southeast Asian ingredients (in comparison to “exotic” cocktails in other places that “try too hard” with too much sweetness or hot spice that detract from even the best quality spirits). There is also a nice selection of zero-proof cocktails enabling health conscious and non-drinking customers to enjoy happy hour or cocktail/food pairings and still get some health benefits from the deal. For example, the Indian Detox blends ginger, honey, turmeric, lemon, orange juice, and ginger beer while the Tamarind Blast fits its name through its mix of tamarind, red chili powder, cumin, Himalayan salt and soda water. 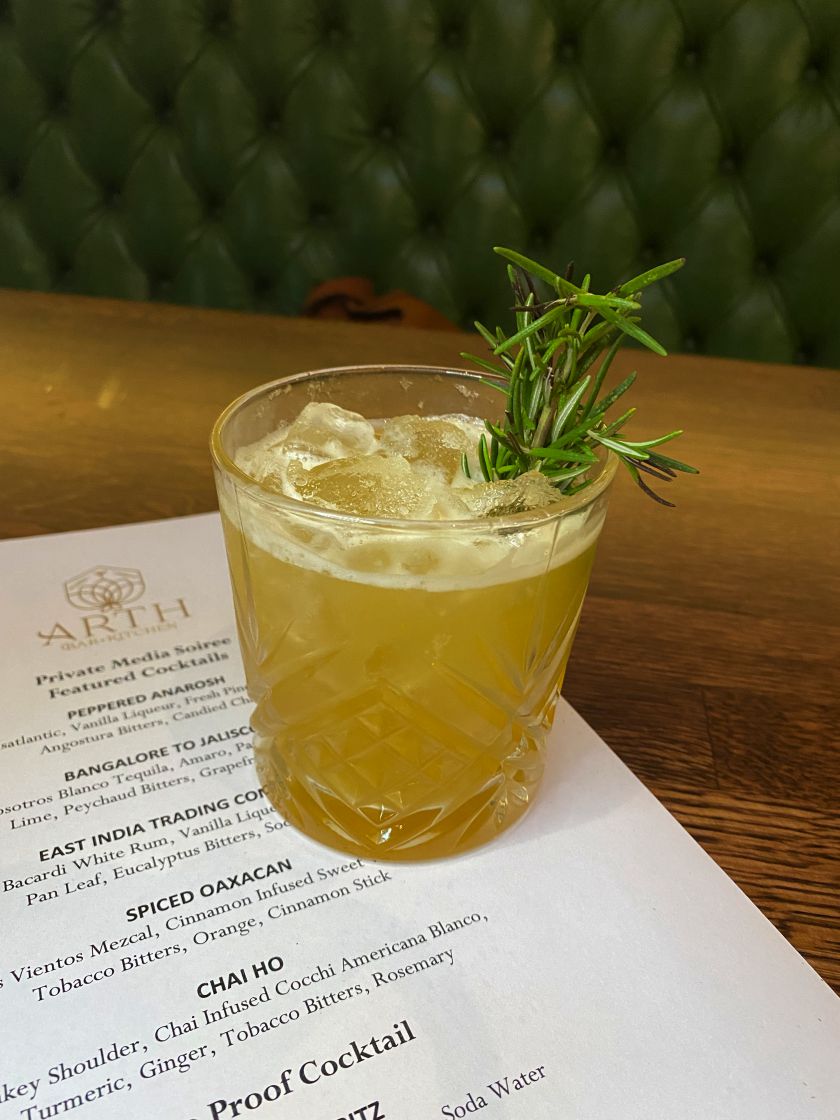 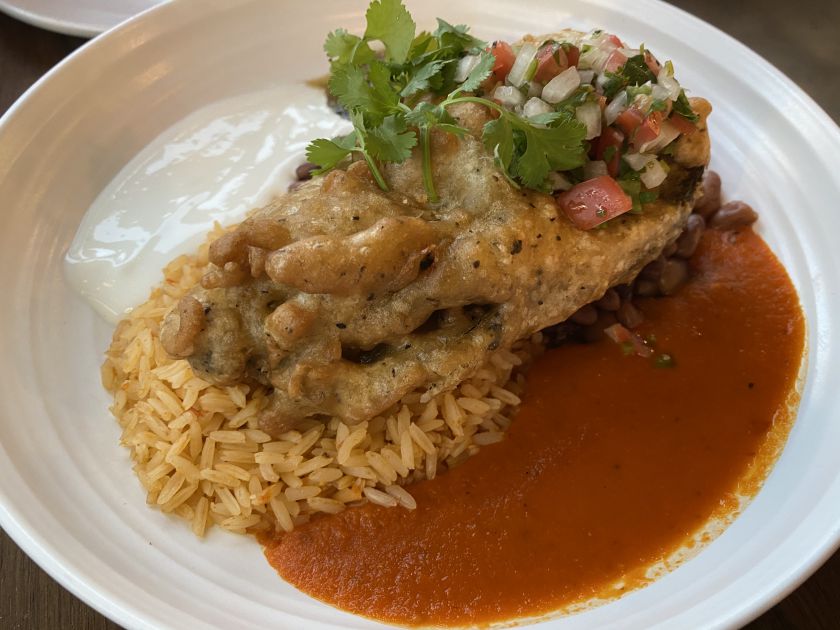 Long-time Angelinos who are avid foodies can mark time through whatever restaurant styles and food trends were “it” for one hot moment or two. The 90s had a whole lot of “Asian Fusion” and “Pacific Rim,” and many locals can recall a time where every restaurant was doing their version of “Chinese Chicken Salad.” On that timeline, they have witnessed the comings and/or goings of “global cuisine,” “New American,” “Steakhouse Revival,” “Nuevo Mexican,” “Celebrity Chef-Driven,” “Gastro Pubs” and so on.

On the other hand, there’s been a lot of talk in the past couple of years about hearty dishes that stir up happy memories of past journeys as a way to deal with the present. The observant restaurateur Scott Cooper used this as an opportunity to go against the grain, and dig into his own memories for inspiration. On top of that, he also wanted to avoid restaurant genres and remind people that discovering new foods can still be fun, especially as it may be a while before some of them get their fix of new discoveries overseas.

“I love those different geography-based types of cuisines for both similar and different reasons,” Cooper explains. “What makes them similar, however, is that although each one has their own flavor profiles and appear different in presentation, they all tend to have a lot of crossover when it comes to ingredients. Also, there’s the reality that while many Americans strive for “organic” eating, it’s the norm for people who liven in those other parts of the world where many favorite dishes originate. They don’t have a lot of mass produced foods filled with the kinds of additives Americans consume on a daily basis.”

While Cooper’s Jackson’s (an extension of his popular Jackson’s Bistro in Hermosa Beach) was a success from its 2012 opening forward, the pandemic prompted him to get creative and reinvent his El Segundo space as Nomad—even if the hummus and oven-baked flatbread served at Jackson’s remained a cornerstone of the new menu.

Cooper describes the dishes he’s devised for Nomad are among the most ambitious he’s ever done, even with simple ingredients and approachable presentation. Case in point: Crispy Chili Relleno with three salsas, Jalisco rice and lime crema; Chimichurri Steak Frites; Wok Seared Shrimp With Jasmine Rice with purple basil and shitake mushrooms; and a variety of skewers, hearty snacks and salads with roasted vegetables. The cocktails, such as From The Heights Of Machu Picchu (Capurro pisco, acholado Wheatley vodka, gooseberry, crushed ice) and Bramble On (Fords gin, Crème de Mure, yogurt, blackberry, lime) meanwhile, are a little more ambitious, and they pair with the dishes as well as wines from the curated wine list. 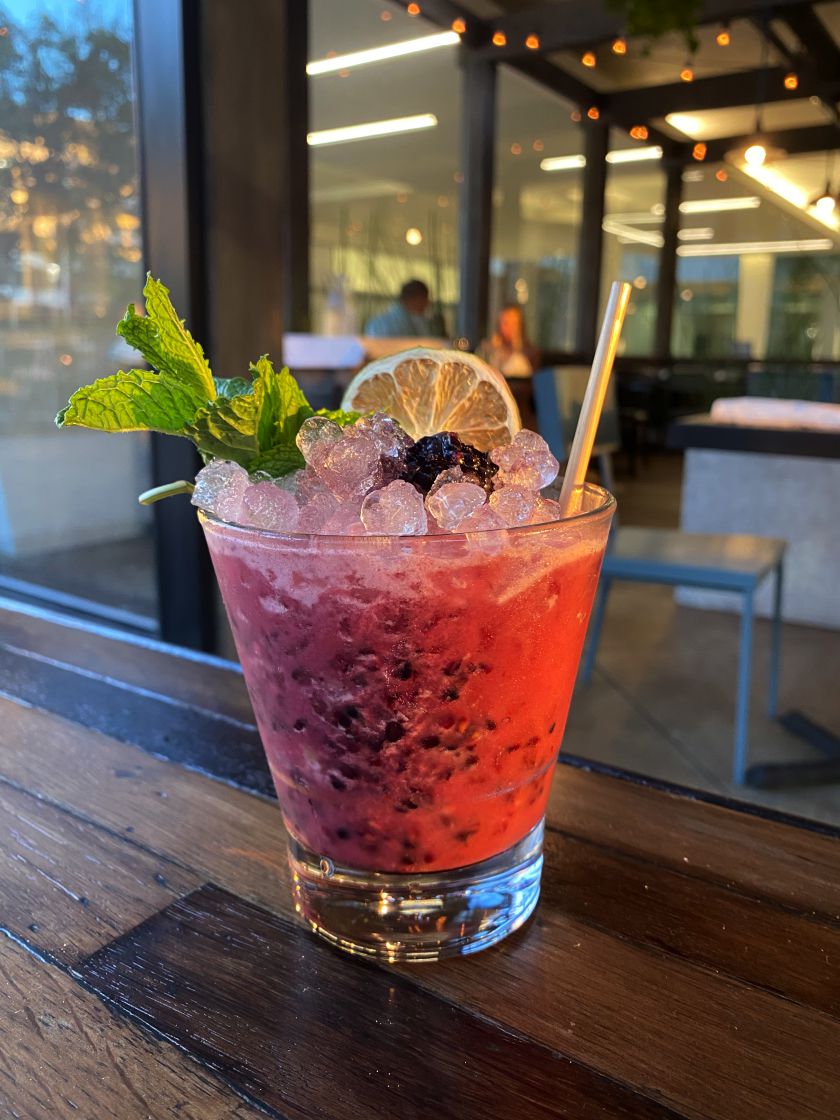 What’s On (at) The Waterfront, Venice, CA 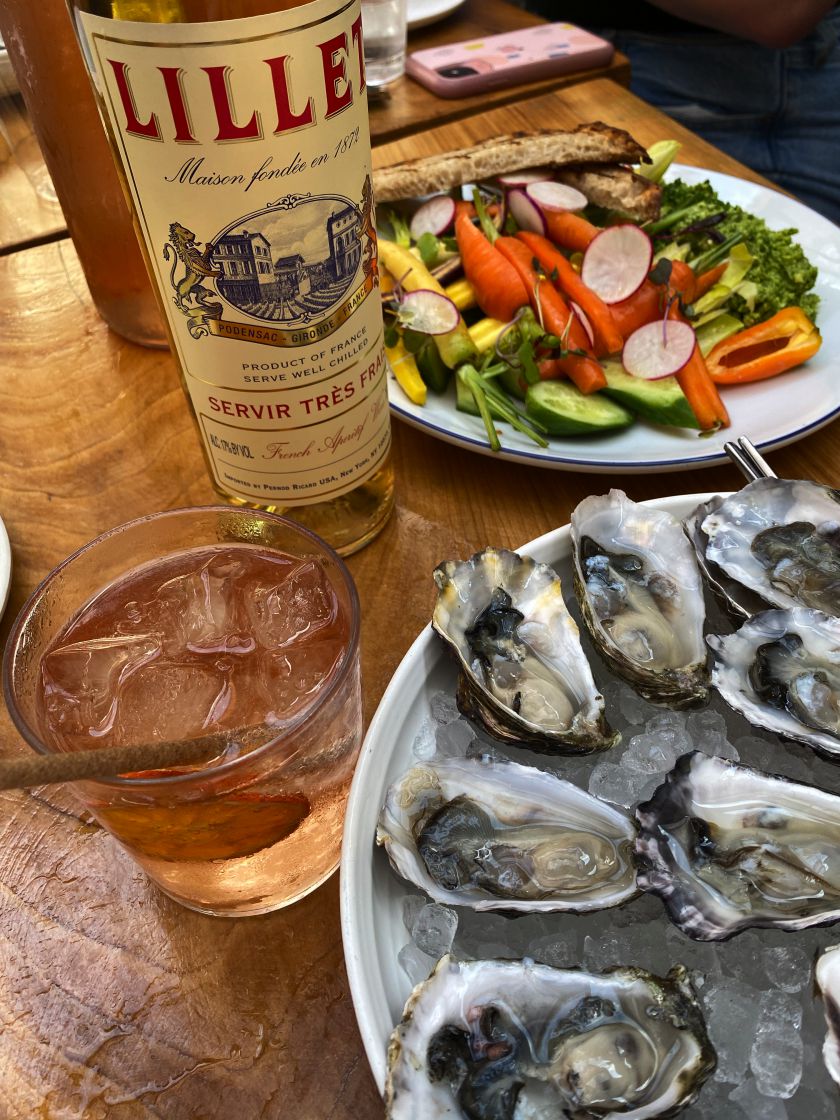 If you are a regular visitor to Los Angeles, or have showed visiting friends and family the city highlights, it’s inevitable that you’ve headed down to Venice Beach to catch a whiff of that “only in L.A.” vibe. If you went on a weekend, chances are you’ve grabbed a bite at one of the boardwalk’s many beach bars for a burger, fish-and-chips or fish tacos. If business associates were involved, dinner was often off the Boardwalk (at a place like the sublime Tasting Kitchen or one of several other boho-chic white tablecloth spots on Abbot Kinney or Main Street) or at a hotel restaurant.

At The Waterfront, however, one can get the best of both worlds—a breezy location right on the beach with views of the Pacific and lots of local Boardwalk color along with elegant beachy décor and creative, thoughtfully turned out dishes and drinks. There are more hits than misses on the menu, which integrates the tried and true (rotisserie chicken, oyster platters, fish tacos and burgers) with imaginative sharable small plates (English pea and cashew hummus with cruidite, chili rock shrimp, rockfish and shrimp ceviche, summer corn agnolotti with Mexican elote seasoning).

The drink menu, meanwhile, follows suit, offering a choice of adult pool drinks, craft beer or made-to-order Lillet Spritzers pitchers using a choice of the French spirit’s white, rose or red varieties. The spritzers are particularly good with the oysters, and follow the current low-alcohol/less sweet beverage trend that’s particularly popular in L.A. right now, and go down as easy as the sunsets along the Boardwalk.

Indoor Excercise: The Shy Person's Guide To Working Out

BORDEAUX ON THE BOARDWALK AND OTHER SPICY SAMPLINGS