Living the dream from performing in Carnegie Hall to President Donald Trump’s New Year’s Eve party, Christopher Macchio does not take his talent for granted as he continues to pursue his ultimate goal of singing at the Metropolitan Opera in New York. 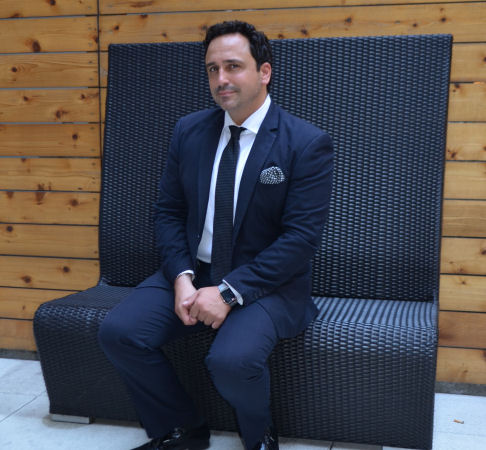 Imagine being asked to take the stage to fill in for Elton John at a New Year’s Eve bash given by President Donald Trump the night before the event. For ‘New York Tenor,’ Christopher Macchio, New Year’s Eve 2015 was an opportunity of a lifetime that would lead to other exciting venues, giving the world the chance to experience his incredible voice and talent of a tenor.

“Elton John cancelled at the last minute, and someone suggested to Donald Trump that I be flown down from New York to Palm Beach in time for the concert. I received the call at 8:00 PM on December 30, agreed to perform, and flew down first thing in the morning on New Year’s Eve,” recalls Macchio.

Being among celebrities that included Serena Williams, Martha Stewart and Steve Wynn, Macchio performed to about 1,000 guests in the most lavish and elegant event of his lifetime at President Trump’s residence at Mar-a-Lago. After the performance, President Trump described Macchio’s vocal gifts as “phenomenal, unbelievable, and incredible!” Moments later, President Trump introduced Macchio to the legendary Rod Stewart, whom Macchio would later perform with in Beverly Hills. 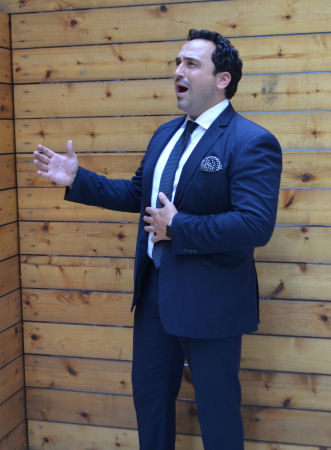 Though Macchio has now performed for many celebrities and dignitaries, his journey to become a singing sensation was not the career he originally planned. For the first 15 years of his life, Macchio kept his natural-born talent to himself. He did not want this talent exposed in fear of being asked to perform in public. However, while attending high school, Macchio had to fulfill an arts requirement and decided to enroll in the school choir.

To get into the choir, there was a mandatory evaluation; the choir director insisted that Macchio sing solo. Being so shy and uncomfortable, Macchio asked to do it in private. “It was a process I resisted to avoid the burden of discovery until I was offered a private evaluation away from the rest of the choir,” laughs Macchio. From this moment on, his voice and life transcended into another dimension as he continued his training at the Manhattan School of Music. 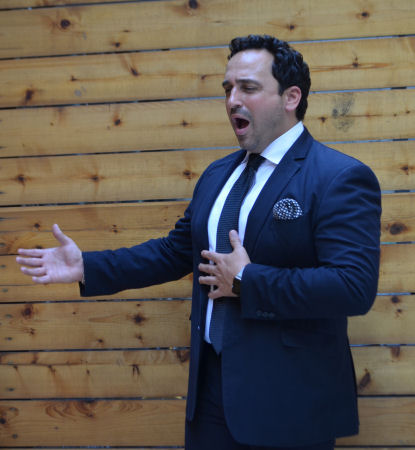 As a professional singer, Macchio recognized the importance of capturing the audience on a more personal level.

“I was born with a natural ability to sing, but in school we learned the deeper nuances of interpretation that give depth and subtle artistry to performance. Since beginning my stage career six years ago, I’ve evolved from giving rigidly formal recitals to developing the capacity to give concerts with a more diverse and interactive audience experience. I have learned to overcome my natural reserve, and give of myself more freely through music, and in my free and lighthearted banter with the audience between numbers. My goal these days is for audiences to take with them a sense that I’m not just a good vocalist, but that I am a man they can relate to personally, and that I’ve taken them to an emotional place that is warm, inviting and memorable,” explains Macchio.

Macchio displayed his charm and charisma during his concert last October at Resorts Casino Hotel in Atlantic City, NJ. As the theater was filled with a diverse audience of different generations, Macchio captivated the crowd with his powerful voice and interaction with the audience. At one moment his voice would resonate through the theater in powerful ballads and the next he would be laughing and joking with everyone as they jested with each other in pure delight. 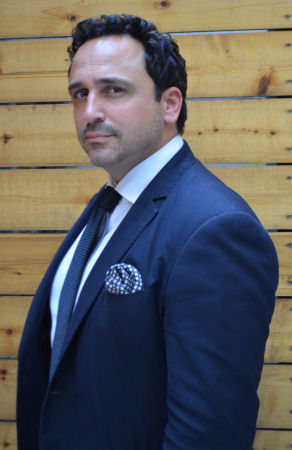 “I like to sing everything. The common denominator for me is to focus on material that is both meaningful and beautiful,” Macchio further elaborates. “There has been a trend the last 70 years in classical music towards new operas that are abstract and lacking in the kinds of melodies that resonate with people and move them. I am unapologetically in favor of championing sonic beauty in music, and in all the fine and performing arts. My favorites tend to be Verdi, Donizetti, Mozart, Tchaikovsky, and the incomparable Puccini. I do enjoy singing the oldest of the Broadway repertoire, and some of the powerful romance pop ballads of the 80’s and 90’s as well.”

Macchio’s most exhilarating performance was to a sold-out crowd at Carnegie Hall with the New York Tenors. As he stood there before a standing ovation, he found the experience to be both humbling and magical with the beloved response he received after his final solo.

While Carnegie Hall was a moment he would never forget, Macchio recalls a funny experience he had prior to another performance.

“A few years ago, I was performing for the inauguration of a high-ranking politician. Just before going on stage to sing on live television, a dignitary and his entourage rushed past me. When I backed up against the wall, a sharp metal edge sliced my suit pants wide open. I then had to immediately take the podium and perform in front of the crowd, with dozens of politicians seated behind me, in full view of my newly vented outfit!”

Macchio’s humble nature and talent have been displayed to people all over the world including President Barack Obama and Mexican President Felipe Calderon. During Rod Stewart’s 70th birthday celebration, Macchio took the stage in front of a Hollywood crowd with Stewart and the legendary Glenn Miller Orchestra in Stewart’s home.

“Rod was truly down-to-earth, introduced me to his inner circle of guests, and showed everyone that he’s an artist with tremendous versatility who can create compelling music in almost any genre.”

When Macchio is not performing, he enjoys taking time to explore his curious nature of life and the world itself.

“I’m a voracious reader, and I absorb all the knowledge I can in the realms of science, art, history, and current events. I find everything in life to be fascinating and I take every opportunity to learn from whatever and whoever is around me. There is no excuse for anyone ever to be bored, there is far too much diversity and richness in the tapestry of life.”

Being a New Yorker definitely gives Macchio the ability to absorb the creativity of life that surrounds him. “New York is without question the global nexus of all intellectual, cultural, and human capital. It’s the point from which one can absorb the greatest quantity of stimulation and inspiration, and then in turn exert maximum influence on the rest of the world.”

As Macchio was originally trained to perform in fully staged operas, his ultimate goal as a tenor is to perform at the Metropolitan Opera in New York, Covent Garden in London, and La Scala in Milan. Given his range of musical talent, he dreams of reaching as many fans as possible and one day performing sold-out shows at Madison Square Garden as well.

In this ever changing world, artistry and music is a common ground that can bring positivity to people of all cultures and backgrounds. You need not be an opera aficionado to be thrilled by Macchio’s voice. He recognizes his talent and strives to share his gift to enrich the lives of others.

“I believe that there exists a certain intrinsic value in maintaining artistic standards that elevate and celebrate the human condition, rather than reduce it to the base, vulgar, and depraved. I want to be part of turning the tide, and re-gentrifying the musical and artistic landscape consistent with that ethos. I think it’s incredibly important for people all over the world to find a way to contribute to humanity in a way they are truly passionate about. Every job, every vocation can have an inherent dignity to it, if the person performing that job is passionate about excellence.” Macchio soulfully adds, “It is my hope that this century will liberate people all over the world to contribute fully to the mankind and its progress, and lift all our fortunes and spirits in doing so.”

Most recently, Macchio was invited to attend the inauguration of President Donald J. Trump and shared his beautiful voice at the Black Tie & Boots Inaugural Ball.

Macchio returns to Resorts Casino Hotel on July 15 to perform for a benefit concert for the Schultz-Hill Foundation’s 15th Anniversary celebrating the arts.

0
Millennium Magazine February 14, 2017
No Comments Yet