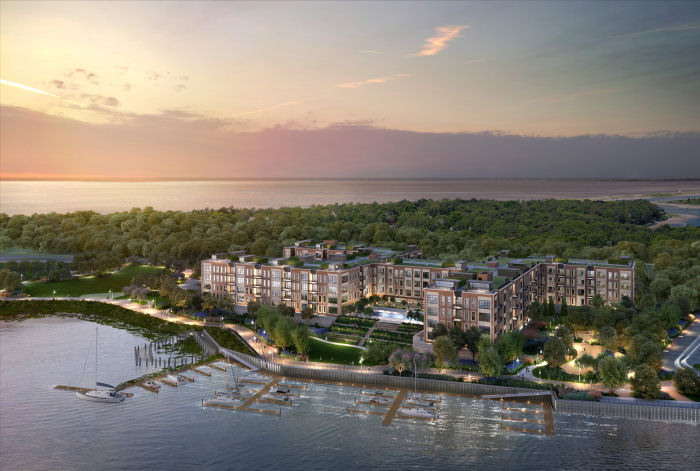 Nestled along Long Island’s Gold Coast, the small city of Glen Cove is undergoing a massive development. For the last twenty years, the city has partnered with RXR Realty to redevelop 56 acres of the town known as Garvies Point. For years, this area was blighted, and was for a time a superfund cleanup site.

Now the project has leapt off the page and is in full swing. The new Garvies Point will contain several new apartment buildings with retail spaces on the ground floors, marinas, as well as a new ferry which will run from Garvies Point to East 34 Street in Midtown Manhattan with an additional stop at Wall Street in Downtown Manhattan.

Mayor Tenke is more than excited to see this area blossom from an eyesore to a thing of beauty. 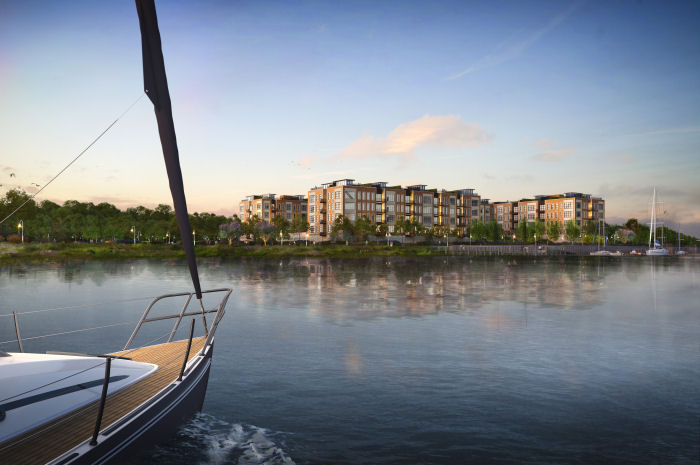 “We are a waterfront community to begin with so having access to our waterfront is a great thing for the residents of Glen Cove. Putting these 56 acres back on the tax rolls of Glen Cove is going to be an economic benefit to Glen Cove. We are looking forward to the redevelopment and the access to that property.”

Seeing as how this entire redevelopment will cost almost $1 Billion dollars, some special precautions were taken. Scott Rechler, chairman of RXR Realty, described how the financing coming into place was one of the most unique aspects of this public-private partnership.

“The $125 Million in bonds were issued to ensure that the project could move forward on all the community-facing benefits including infrastructure improvements and publicly accessible open space at no additional cost to the taxpayers. Once the entire Garvies Point project is complete its expected to generate hundreds of millions of dollars in economic activity.”

As can be expected with a project of this scale, there can many challenges. One of the most difficult, Rechler said, was dealing with the sites previous industrial life. Prior to being cleaned up, Garvies Point was a superfund cleanup site with $120 million being spent to rid the land of toxic chemicals.

“The remediation efforts were and continue to be very meticulous and were a part of the early planning and focus of making this project happen. However, today the most significant challenge in redeveloping this site is coordinating the infrastructure improvements while the vertical construction of the buildings takes place, making it a complex construction site.”

Many other precautions are being taken, according to Rechler, most of which involve getting utilities for the buildings operational.

“We are taking care to make sure that vital links such as improved roadways, electrical power, sewage systems, storm water management and flood resiliency are happening at the same time that we are building the property vertically. It’s important to make sure these vital services are moving along at the same time we are under construction in fact; we’re going above and beyond the standard flood code requirements to ensure this property is protected from any future storm surge.”

Getting this project from the planning stage to physically breaking ground was also a challenge. Rechler detailed just how this vision came to be after years of planning.

“It’s important to note that a project of this size and scale requires a lot of stakeholders to weigh-in, and there was a meticulous process to get the property reviewed, designed and approved. An in-depth process like this is quite typical of transformational developments such as Garvies Point. Everyone wants to be proud of the final product that allows access to a shared amenity like the North Shore waterfront.”

While these condominiums are considered the lap of luxury, that all comes at a cost. With a starting price of $650,000, one worry could be that people may not move into at the rate expected. However, after looking at the market, Scott Rechler, has found quite the opposite effect in terms of what homeowners want.

“We carefully watched the market trends on Long Island and the demand is very high, and we think we are meeting a need. It turns out that most of the rental housing stock on Long Island is over 20 years old and the demand for new high-level construction of multifamily housing is excellent. In fact, prices have increased three separate times at the Beacon to meet the demand of new buyers.”

Mayor Tenke has found that a majority of the reaction to the project has been positive. He said that people want to have the ability to use the waterfront again and will have quite a few new things to do there because of the redevelopment. 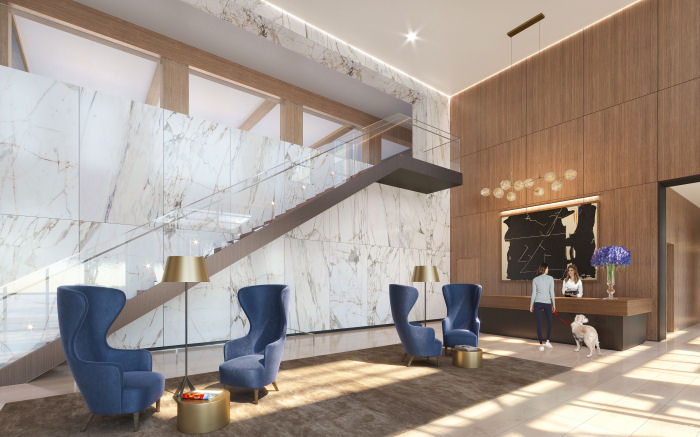 However, despite the project providing new income and growth for the small city, some residents are opposed to the project. Charles Tracy Bowen is a street performer and aspiring actor in Glen Cove. For thirty years, he drove a tow truck until a heart attack forced him to retire. He feels that the redevelopment has some benefits but is more of a money grab.

“I think things should stay the same. This is going to end up like Queens, I mean it’s going to trivialize it. Everything’s going to be minute and nothing’s going to really matter and then we’ll have to move out east or something.”

Instead of a large-scale development, Bowen feels that the area should have been left alone or something smaller should be in place of the large-scale overhaul taking place. Other concerns from residents are that the buildings on the site are going to be too large and will eclipse their views of Hempstead Bay.

Phases one and two of the development are not scheduled to open until Fall of 2019. Rechler spoke more about what these two phases will include.

“The project is set to be activated in a few phases. The first phase, which is currently underway, consists of 552 units of housing and 20 acres of open public space. The Beacon, the 167-unit condo building and Harbor Landing, the 385-unit rental complex make up the residential portion of phase one. The second phase will include workforce housing, as well as commercial and retail components. Eventually, when the third phase beings, we will have more condo development.”

One of Mayor Tenke’s concerns was that the area would become a private community, thus limiting the access other residents might have had to the waterfront.

We don’t want a private community basically down there excluding the rest of the residents in Glen Cove and I think that has been a theme that RXR has been following and providing us. 28 of that 56 acres is going to be park land and usable space for the residents of Glen Cove as long as that comes to fruition along with the ability to have some retail down there and some parking spaces and the marinas, I think I’d be happy with that type of development going on down there.

The entire redevelopment is just what the small city needs to become an up and coming hotspot. This will attract many people to not just vacation and visit Glen Cove but to consider it their home. There are, however, a few details that still have to be ironed out, such modes of transportation to and from Garvies Point.

Seeing as how Garvies Point is located in the southern part of Glen Cove, getting to and from the Glen Street and Glen Cove Long Island Railroad stations can be a hassle. Both RXR Realty and Mayor Tim Tenke are pondering the ways that people can get to and from the area under reasonable means. One answer to this problem could be adding a few extra stops to the Loop Bus that circles around Glen Cove. 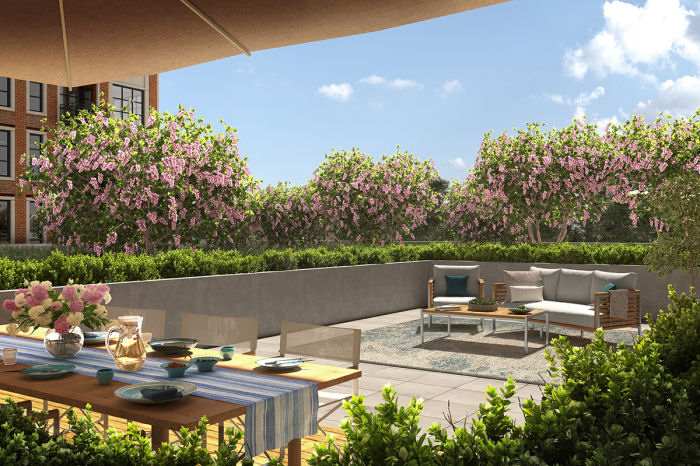 The other big question is who will be operating the ferry?

Back in 2017, Glen Cove partnered with the M.T.A. to run a ferry to Manhattan while service on the Oyster Bay branch was delayed due to track repairs. Though the ferry was a huge success, it finished once service returned to normal. Mayor Time Tenke, though, is just hoping to find a subsidy to help assist with funding the project.

With the redevelopment nearing its completion date, Rechler is certain that the redevelopment will allow the residents of Glen Cove, as well as many others to reconnect with the waterfront as if they are visiting an old friend.

“Many people are looking for new, quality housing that is community-focused, amentized with easy access to transit. That’s what Garvies Point provides – particularly for those who wish to enjoy the benefits of living on the waterfront.”

Sandpearl Resort and Spa: Bring Your Laptop…and the Kids