This year’s Women In Media Holiday Toast was an incredible event filled with surprises and excitement! California Assemblywoman Wendy Carrillo made a special appearance to present a California Legislature Assembly certificate to Tema Staig, founder and executive director of Women in Media. As she stepped up to the mic, Carillo offered glowing remarks about Staig’s commitment to promoting gender parity and balance within the film and entertainment industry. She said, “It is my honor to recognize you for your tireless efforts in providing tools and resources that help our community realize economic empowerment and reach their fullest potential.” The audience erupted into cheers as they showed their appreciation for Staig’s hard work.

It was truly inspirational to see how far Women In Media has come since its inception – from networking opportunities, supporting women in their projects, and panel discussions on topics such as diversity in media production and creating industry networks among women filmmakers – they have done so much to empower women in the last decade. It was no surprise that Carrillo was keen to recognize Staig’s achievements. She praised her initiative in establishing Women In Media as an organization that empowers women by giving them access to the resources they need to thrive professionally.

At this momentous event, everyone recognized just how far women have come but also acknowledged there is still work to be done – a sentiment echoed by Carrillo, who reminded us all of why we gather each year for this celebration: “to remind ourselves of what can be achieved when we create equitable opportunities for everyone.” The festive Holiday Toast tribute and fundraiser was a remarkable event headlined by Academy Award-winning songwriter/composer Diane Warren. She put on an incredible performance of her current hit single “Applause” on guitar, accompanied by Sharon Farber playing the piano and 11-year-old vocalist Eden Kontesz. As soon as Warren began to strum her guitar, the song effortlessly filled the room with its passionate lyrics, captivating everyone present. Meanwhile, Farber provided an impressive addition to the performance with her effortless skill at the keys. The combination of these two musical forces was something truly remarkable to behold. To top it off, Kontesz displayed stunning vocal talent with her belting performance of background vocals during certain sections of “Applause.” Her ability to keep up with Warren was mesmerizing for all who were listening, creating a touching crescendo of sound that echoed throughout the hall. All of these combined talents created a magical atmosphere in the venue that day that will be remembered fondly for years to come. The annual Women in Media (WiM) Holiday Toast event was held at Television City, supported by Zach Sokoloff, Senior Vice President at Hackman Capital Partners. The prestigious gathering saw five “Women In Media” honored for their contributions to the industry. Among them was Executive Producer, Writer, and Director Deborah Pratt, who has worked on hit shows such as Quantum Leap; Oscar-winning Costume Designer Deborah L. Scott, whose work includes films like Avatar, Way of the Water, E.T., and Titanic; Supervising Sound Editor Becky Sullivan from The Woman King; Cinematographer and Camera Operator Michelle Crenshaw who was recognized for her work on The Ranch; and Diane Warren, a visionary artist whose memorable style is deeply entrenched into today’s entertainment landscape. Guests were treated to a delightful celebration with plenty of mimosas during the event, which honored these pioneering women who have broken many boundaries across the media world. At the noteworthy event, each honoree was warmly received with cheers and applause as they were introduced by colleagues familiar with their outstanding achievements and contributions to the entertainment industry. Four toast masters – Kimberly Jimenez (Senior Vice President of Post Production Services at Sony Entertainment), Emmy-winning cinematographer Johnny Simmons ASC (known for his works on Family Reunion and iCarly), producer/director/writer Romell Foster-Owens (President of Jowharah Films), and award-winning composer Sharon Farber (composer for Brainwashed: Sex-Camera-Power) – provided a tribute to the remarkable individuals. Following their heartfelt speeches, Tema Staig hosted an interactive Q&A session in which the honorees shared anecdotes from their careers, providing listeners with invaluable insight into developing success in the industry. Clearly, all were inspired by the unique stories told by these esteemed individuals, further celebrating their impressive accomplishments.

The winter wonderland stage provided a truly stunning backdrop for the fabulous attendees. Thanks to media partner Gurus Magazine led by founder and owner Derek Warburton, the red carpet was abuzz with activity. The Celebrity stylist and magazine entrepreneur Derek Warburton couldn’t have been more thrilled to be there. His admiration was apparent when he commented, “It was an absolute honor to be in a room filled with so many passionate women dedicated to achieving their goals and working toward equality.”

The atmosphere of unity, strength, and ambition that permeated the day was palpable, creating an incredibly inspirational day for all involved. Every detail of the event had been carefully curated to create an unforgettable event that celebrated these amazing women’s accomplishments while simultaneously fostering connections between like-minded individuals that will help each other succeed moving forward. On the red carpet, four prominent style trailblazers stepped out in all their glitter and gloss: Amanza Smith (from the reality show Selling Sunset), Jai Rodriguez (formerly of Queer Eye For The Straight Guy), Chaley Rose (Nashville), and Kearran Giovanni (The Resident). Joining them in support of honoree Deborah Pratt were Raymond Lee, Mason Alexander Park, Caitlin Bassett, and Narisa Lee from Quantum Leap. Pretty Little Liars alum Troian Bellisario was also present to honor her mother, Deborah Pratt. All the attendees radiated a distinct air of sophistication that was hard to ignore, and the stars shone brightly as photographers snapped away at the well-dressed guests. 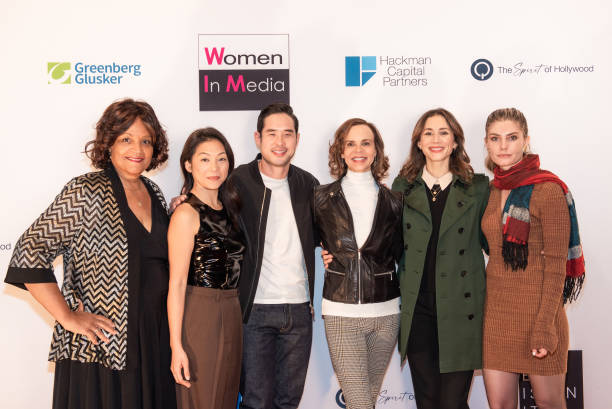 During a red carpet interview with Gurus Magazine’s Heather Duffy, Amanza Smith shared how she is “trying to use her platform to be a voice.” She continues, “looking around all the women out here today, having been influenced by them in some way, I’m just trying to walk in the footsteps of some of the others who have paved the way before me.” 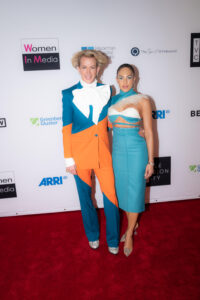 Tema Staig also shared how Women In Media started on a red carpet interview with Heather Duffy: “We started Women In Media in 2010. We were an informal networking media group that went viral in 2017.” She expressed how there was a need to show women’s history as it was happening, “We honor legendary women to show people that we are doing the work, we are excelling in the industry – above and below the line, from the executive producers down to all the different departments that make each project successful – and we are going to keep doing it until we get close to parity.”

Deborah Pratt, one of the honorees, shared, “It is with a full heart that I share this humble thank you to be honored by Women In Media. Your work to advance and connect women in the moving image arts speaks volumes about your grace, integrity, and devotion to entertainment. Thank you for taking the time to recognize my work in the entertainment industry. I cannot express my gratitude enough at being honored on this special occasion by the members of Women In Media.” Women In Media is a non-profit organization that promotes gender balance in the film and entertainment industries. They strive to create equal opportunities for female filmmakers, both above and below the line. Through professional development, networking, and advocacy initiatives, Women In Media seeks to level the playing field for women in the industry. Additionally, they are dedicated to spreading awareness of underrepresentation and inequality in the industry by highlighting inspiring stories of successful female filmmakers who have shattered glass ceilings. Ultimately, Women In Media hopes their work will lead to a more diverse storytelling landscape that everyone can enjoy.

For more about Women In Media, visit their website at https://womennmedia.com.

Sushi by Bou Opens in Brickell

How To Encourage Wellness and Sustainability in Your Business Ventures