Rock out on every occasion from Memorial Day to Father’s Day, graduations and July 4th with restaurants that celebrate a melting pot of culinary and cultural influences.

As Los Angeles is a melting pot of culture, why not enjoy its take on the “All American” summer with restaurants that not only represent the city’s make up, but play with a few old traditions as well.

Mexican food is a Los Angeles institution that’s been taken to interesting new places under the influence of imaginative chefs and restaurateurs. Hollywood bad-guy Danny Trejo ends up being a real hero in the real world when it comes to transforming street food classics into memorable morsels. He has a small army of Trejo’s Tacos restaurants, including a Hollywood flagship (Trejo’s Cantina) that features an expanded menu of tacos, burritos, smokin’ salsas and other tasty items which can be washed down with a California-centric craft beer selection and margaritas.

Trejo’s Cantina Hollywood’s menus pack as much of a punch as the action movie veteran himself.

In the business corridor of Woodland Hills, XOC delivers a consistently excellent happy hour and main menu of fantastic pan-Mexican creations, outstanding made-to-order guacamole, and lots of sides and condiments packing a serious chili pepper punch. On the Sunset Strip in West Hollywood, one can enjoy a bonito brunch at Pink Taco, which blends the street food zeitgeist with the area’s artsy flash and glamorous rock star vibe. And if it’s going to be “just drinks” in that neighborhood, belly up to Laurel Hardware’s new Mezcal-focused bar–a true celebration of the spirit of the moment!

In the realm of fine and fashionable Mexican dining, Viva Hollywood opened this spring, bringing a lot of “something new” to a formula as well-worn–and loved–as a pair of Frye boots. The over-the-top “Hollywood Regency” decor and pan-Latin concept of previous tenant Beso has given way to an open, airy space where friends and associates can gather to enjoy the spectacular mixology of Erik Weatherford, whose current repertoire includes “Truth of Dare,” “Viva Old Fashioned,” and the citrusy “La La Land,” which makes vodka exciting fresh again.

While there is a classic Mexican skirt steak dish on the menu, appetizers and seafood dishes are the real standouts: Empanadas with seasoned turkey; baked goat cheese queso fundido, flatbreads with short ribs and Spanish chorizo; shrimp and garlic cooked to perfection; and epic cotija cheese and chile sweet corn side; and Seabass Veracruzana flanked with the right amount of avocado cream that’s a revelation (as most millennial Angelenos came of age eating sea bass dishes soaked in sweet miso in “Pan-Asian” spots). There are also several well thought-out vegetarian options that transcend the now-familiar “soyrizo” taco (chipotle tofu enchilada, chili tofu side with hocking black beans, and chipotle tofu or raja peppers flatbreads).

The “gastro-pub” has long gone mainstream, and in response, a few restaurant groups have risen to the challenge of going beyond burgers and flatbreads to keep the interest of fickle, Eater-reading, food-blog followers. Craft Hill, which recently landed in South Pasadena and El Segundo, and Bacari (in Playa Del Rey, downtown Los Angeles and Glendale) are literally all over the map.

Craft Hill and Bacari perfect the art of a not-so-routine happy hour or dinnertime.

Back in West Hollywood, favorite standby steakhouse Boa provides new incentives for people to come in for happy hour (Thai cauliflower “wings”; chicken sliders), as does the Koreatown-adjacent branch of burger master Plan Check with its punchy selection of wings, sliders, tacos and more served only at this location (the Santa Monica “Plan,” meanwhile, focuses on seafood).

Plan Check’s Downtown L.A. branch is not afraid of local flavor and spice.

The ultimate American BBQ cookout experience can be found at Culver City’s Maple Block Meat Co. Whether one eats in, caters, or carries out, the evocative location focuses on bringing butchering, smoking and grilling meat up several notches when unique sauces, seasonings, sides and, perhaps, the most decadent bread putting west of the Mississippi are brought into the picture. The ambiance works on many levels, from the intense and smoky aromas to the sweet honky-tonk/backyard setting. Chicken, pork, and beef are all in the picture, along with a hearty craft beer selection and light, quenching cocktails. 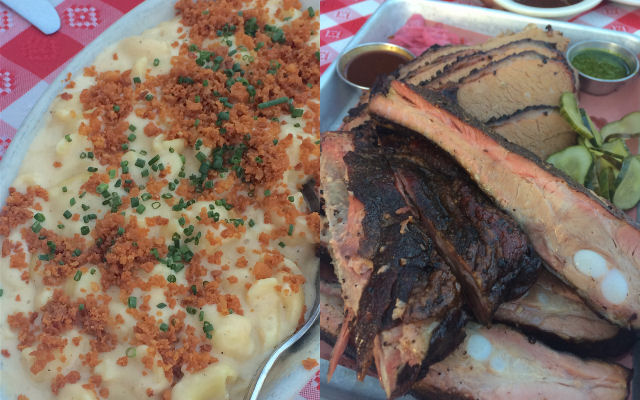 As we are entering the summer blockbuster movie season, the Tuck Tavern at Westwood’s iPic theater offers a new incentive for a return visit–weekend brunches. The menus are streamlined and simple, but have the necessary elements for a theatrical success–perfect Bloody Mary and Moscow Mules, flawless chicken and waffles, down home favorites like biscuits and gravy, and some unique appetizers/small plate dishes including crispy potato “latke’ fries and smoked salmon stuffed popovers.

Anybody who associates a summer with a great soundtrack, meanwhile, will appreciate the flagship location of Delicious Pizza, brought to us by brothers Michael and Rick Ross, owners of the iconic L.A. hip-hop record label Delicious Vinyl, responsible for bringing to America such superstar hip hop acts The Pharcyde (“Passin Me By”), Tone Loc (“Wild Thing” “Funky Cold Medina”) & Young MC (“Bust a Move”) and many more. A DJ booth, generous event space and golden-era hip-hop memorabilia make it worth the trip to the rebounding West Adams neighborhood, the food developed by father-son-chefs Fred and Travis Sutherland surprises and delights, from perfect sourdough crusts that stand up to hardcore toppings to divine ricotta pancakes to their own ice-brewed coffee, Nutella cheesecake and (of course!) Funky Cold Sangria!

The owners of Delicious Vinyl and Delicious Pizza are still cranking out the hits, now in edible form.

The Heart and Science of Yoga