Wouldn’t it be great if there were a Hamptons restaurant with a fabulous view, amazing food and a lively clientele of uber attractive weekenders mixed with the year round crowd?

Actually, there is. Bay Kitchen Bar, a new eatery that opened this spring in the space that formerly housed such spots as Andrra and Bostwick’s has become the new happening Hamptons dinner spot. Its name reflects, in simple English, its defining characteristics, but we will leave it to you as to which is your most dominant reason for going.

“Bay” refers to the estuarial inlets on which the Springs restaurant is located that can be viewed from the second-story aerie. A chic lounge area with sofas sheathed in blue and white stripes looks to the north and west while the dining room, also with large open windows to give it a tree house feel, overlooks both a small marina and wetlands sprouting osprey nests. These vistas are the best we know of on the South Fork and are particularly handsome during the half-hour windows before and after sunset. A chance to see how the light plays on the water and the color-painted sky are best reasons to go.

Another just as important reason is the “Kitchen,” but we’ll get to that in a moment. The “Bar” of the title is actually two bars, one off the dining room with a sitting area in front of a continuously lit fireplace. The other is in an outside lounge area where people sit on chic sofas, sipping Whispering Angel rosé and other libations while nibbling exquisite appetizers. The atmosphere is exceptionally friendly starting with co-owner Adam Miller who greets you with a welcoming smile, thus making the entire restaurant conducive to meeting other patrons.

The “Kitchen” is where the dishes are created, that are among the best in the Hamptons. The “sea to table” menu is the brainchild of chef Eric Miller, (Adam’s father) who helmed the kitchen at Madison and Main last summer (now Doppio Sag Harbor), and has owned several restaurants and nightclubs including The Catch in Port Jefferson. Chef Miller also runs his catering businesses, Food and Co. and Hampton Clam Bake, out of the premises. While Eric mans the kitchen, Adam runs the establishment. To do so Adam sold his business Waverly and Irving, a candle company.

On one recent sun-blessed evening, our party settled into a corner table with a splendid view of fingers of sea grass-carpeted land jutting into the bay. Boats slid into docks and ospreys glided on the wing as our delightful and energetic waiter, Dominick, guided us through the menu.

The Violet Collins, made of Edinburgh Gin, lemon, and club soda with a candied violet ice cube was divine. The house Julep, a refreshing concoction of light and dark rums, fresh coconut milk, and pineapple juice — fruity but not too sweet — was just right. The bread was accompanied by a plate of robust roasted tomatoes fortified with goat feta instead of the usual dish of olive oil — an unexpected delivery of welcome.

The super-efficient and endearing Dominick brought us a selection of “Small Plates”, an assortment of tasty treats, ranging in price from $14 to $21, and featuring Greek-style spreads (hummus, roasted pepper feta, tzatziki) to charred baby octopus – a dish so authentic we felt like we were in Greece. With its tender meaty tentacles, bulgur wheat base, and minty sauce it is by far the best item on the menu and worth a trip to the Springs. The striped bass ceviche was clean and sweet and the tuna ceviche was “off the charts, not fishy” according to the tuna maven among us. There was no filler in the crustacean-rich crab & fish cakes, a true value with its generous portions. “When it comes to something like crab we fool around with it as little as possible and let the natural flavors come through,” said Chef Eric. Wise choice.

The spit-roasted Long Island duck, with its intense flavor, was the winner among our entrees. Both the sea scallops and lobster ravioli came alive in their respective sauces, a tangy Provencal (scallops) and tomato, fennel and saffron (ravioli).

Desserts were out of this world. A strawberry shortcake, which Dominick described as “an explosion of summer,” was just that. The Key Lime tart with its buttery graham cracker crust, pale yellow center and tall meringue crown was beyond scrumptious. The oatmeal topping of the peach cobbler was given a savory edge by a chiffonade of basil leaves.

“Having the best view in the Hamptons brings them in, but it doesn’t bring them back,” said Chef Eric. However the welcoming ambience and fabulous food certainly do. 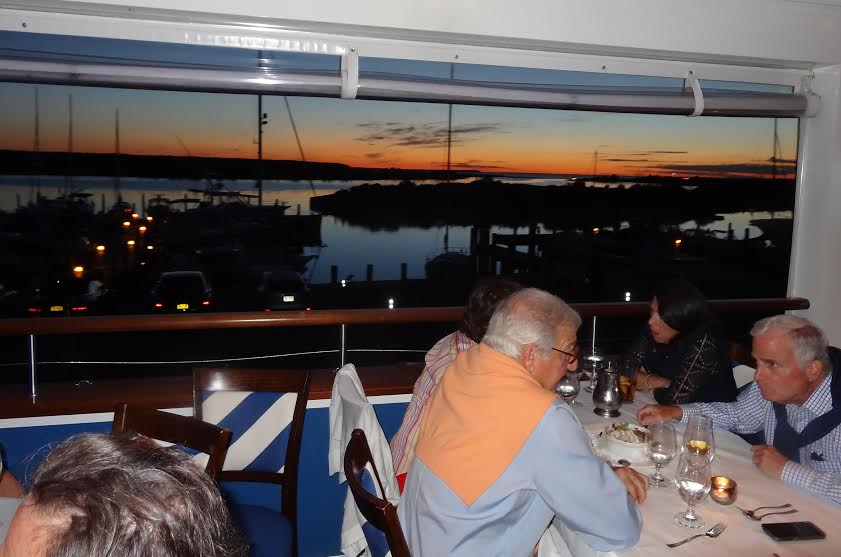 0
Millennium Magazine August 5, 2014
No Comments Yet