After the culinary splendor of the holiday season has run its course, there are different ways Angelenos shift gears with their dining habits. Some get ready for the “second holiday season” (the Award Show party circuit). Some go on ambitious cleanses and diets to atone for holiday season sins. Another group cozies up on weekends to enjoy solid, honest comfort food with friends, family, and colleagues.

Body conscious fashion not withstanding, there is nothing like taking in brunch in L.A. during the winter, when it is often warm enough to dine outside but cool enough to justify digging in to all things homespun, satisfying, and a touch carb-y. It’s good to know several L.A. restaurants encourage us to give ourselves a break while breaking bread with those who make us happy.

The year-old Norah’s in West Hollywood features a menu that’s as diverse as the community it calls home. Comforting, southern-influenced signature dishes such as fluffy Ancient Grain Pancakes and Cinnamon Roll Monkey Bread joyously co-exist with a variety of risk-taking, internationally-inspired dishes including Duck Confit Hash, Soft Scrambled eggs, Squash & Burrata salad, Jasmine Rice Congee, and Short Rib Pastrami. All of these fearlessly rich dishes are complemented by light, quenching cocktails and served in an airy, sunny space that brings the Southern California outdoors in.

[slideshow_deploy id=’8402′]
A study in contrasts: Norah’s serves the world (and breezy cocktails) on a silver platter.

Laurel Point in Studio City, introduced this year by Grill Concepts (of Daily Grill fame) manages to mix breezy Atlantic Coast flair with a few Asian twists. With fresh fish and sustainably harvested ingredients as a starting point, its menus deliver with refreshingly creative cocktails such as Ronin 47 (which comes with its own “show” of table-side completion) and green tea and gin-based Geisha (get the name), as well as indulgence-worthy mains as Lobster Benedict and Cheddar Biscuits & Gravy (country sausage, sunny egg, Louisiana hot sauce, maple). The appetizers, many discounted for weekday happy hour, are in themselves worth a trip if business takes one to this side of the “Mullholland Drive” divide, such as the deviled eggs with crab and salmon roe.

If you find yourself on the West Side, and in a Northern California state of mind, Napa Valley Grille is your destination. The menu features exceptional selection of breakfast treats to fuel up a weekend run along the Santa Monica paths or a jaunt through the Getty or Hammer museums. Although the Westwood staple celebrated its 15th Anniversary this year, Napa Valley Grille reinvented itself with over $2 million in renovations, as well as new Executive Chef Adrian Vela. There are plenty of delights for those with a sweet tooth (the cinnamon roll bread leading off the meal; an indulgent Brioche French Toast), as well as jazzy riffs on eggs Benedict dishes and sides such as Brussels sprouts topped with an egg that can be meals in their own right. Cocktails, light and appropriately breakfast-y, are a delight.

If nostalgia is your thing, Hey 19!, created by restaurateur /entrepreneur/bartender Demi Stevens, is a groovy choice. Like many brunch conversations itself, it is full of nostalgia, great music (live on nights and weekends), 70s-hued cocktails (names), and updates on items you know and love, such as their chicken and waffles dish, Eric in a Morning Blanket egg-travaganza, Quite Contrary Mary bloody mary cocktail, and epic jalapeño mac-and-cheese. We’re sure the gang from “Three’s Company” would approve. Just like the best local hangouts, the Torrance-area spot takes effort to find (it’s located in a quiet strip mall), but is worth the effort.

The Salt Creek Grille, a short drive from some of the South Bay’s most prominent tech and business parks, takes a contemporary California approach to its scratch-crafted brunch items. The varied assortment includes addictive Apple Fritters and dressed up versions of Huevos Rancheros, French Toast, Monte Cristo, Quiche, and Eggs Benedict. 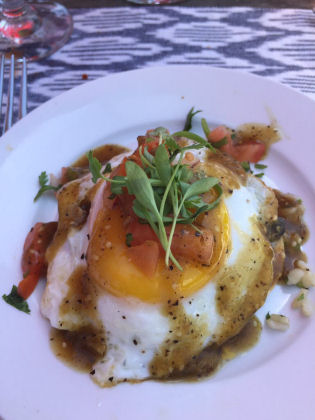 Silver Lake sports bar 33 Taps, meanwhile, brings a welcome approachability to one of the city’s trendiest-arty neighborhoods. Expext to find buffalo cauliflower (a healthy riff on wings), as well as updated nachos, beef sliders, fish tacos and French dip sandwich (short rib, provolone, crispy onion, au jus), made to order. For pickier eaters, the kitchen also can whip up many different vegetarian and vegan options, including a selection of fresh salads.

Thanks to Pitchoun! Bakery in downtown L.A., Europe’s exquisite bounty of country fare is an easy trek from any boardroom, convention hall, or hotel. As the artisan-owners hail from France, diners can be certain its authentic breads, dishes, and condiments are prepared from scratch. The “petit déjuner” and cafe menus show simple ingredients can make a big statement (especially with the Parisian Omelette and Provincial Eggs) when combined and presented the right way.

Toe-Tapping Terrific Entertainment: Broadway's Holiday Inn Gets Us All In The Christmas Spirit

0
Millennium Magazine December 4, 2016
No Comments Yet