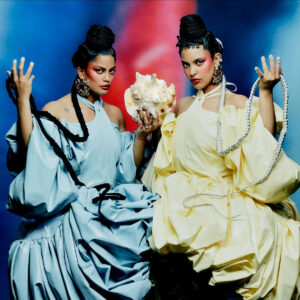 After tackling subjects like womanhood, racism, and activism on their 2017 release Ash and familial history, death and origins on their 2015 self-titled release, on Spell 31 the twins set out to remobilize the power of their birth given destiny as Ibeyi, which has led them on a path to restoration in pursuit of true harmony, healing and magic. Featuring 10 new songs, written by Ibeyi, who worked again with their long-time producer Richard Russell (Ash, Ibeyi), over the course of 2021 in London, Spell 31 features appearances from Jorja Smith, Pa Salieu, BERWYN, Ibeyi’s father and mother and a reimagining of Black Flag’s “Rise Above.”

More on Ibeyi:
Since the release of their critically-acclaimed sophomore album Ash and the duo’s globally acclaimed, eponymous debut album, Ibeyi’s music has garnered fans and collaborators in some of the most iconic artists of today including Beyoncé, Residente, Alvin Ailey, JR, Lin-Manuel Miranda, Prince, Roy Hargrove, Adele, Kamasi Washington, David Byrne and Emicida; a result of Ibeyi’s uniquely, captivating blend of Yoruban music with modern jazz, pop, electronic, soul and hip-hop. Their music and original compositions have been featured in the films ROMA and How to Stop a Recurring Dream, and in campaigns for Chanel, Nike, and Louis Vuitton.

Dr. Sandra Lee (AKA “Dr. Pimple Popper”) Joins Sun Pharma Awareness Campaign to Spotlight the Role of Hormones in the Skin as an Underlying Cause of Acne