An interview with writer/director Jeff Baena

Indie film Life After Beth made the festival rounds this year—including Sundance, where it debuted—and will open at New York-area theatres on August fifteenth. From writer/director Jeff Baena, the Life After Beth’s stellar cast includes Aubrey Plaza, Dane DeHaan, John C. Reilly, Molly Shannon, Cheryl Hines, Paul Reiser, Matthew Gray Gubler, and Anna Kendrick. Here’s the synopsis: Zach (DeHaan) is devastated by the unexpected death of his girlfriend, Beth (Plaza). But when she miraculously comes back to life, he’s thrilled, but totally confused. (Zach notices she’s ‘back’ when he sees Beth through the windows of her suburban home.) However, the newly-returned Beth isn’t quite how Zach remembered her. Actually, resurrected Beth evolves into a zombie. No, really. And that’s when Zach’s life really takes an unexpected turn…

A fan on YouTube called Life After Beth a “zombie-rom”. However, writer/director Jeff Baena, a Miami native who graduated from New York University and currently lives in Los Angeles, wants moviegoers to get less caught up in genres and labels, and watch the movie with no pre-conceived notions. “I don’t know where the zombie idea came from,” says Baena in a recent interview from New York City, who first wrote Life After Beth in 2003. “I was reading a lot of Jacques Derrida at the time. He analyzes zombies in his idea o
n how language is flawed, so maybe that had some influence. I envisioned the scene where Zach sees (‘new’) Beth through the window and was drawn to that moment and the script grew from that.”

Back in 2003, actor/writer Joseph Gordon-Levitt was interested in a feature role at the time. Baena explains that once he completed the script, nothing really came from it immediately and so he moved on to other projects. Years later, actress Aubrey Plaza’s agent brought the script up to her as a possibility. “And that’s when the film re-entered my consciousness, and I realized Aubrey would be perfect for the role of Beth,” says Baena.

Dane DeHaan signed on to play Beth’s love interest, Zach. “I met Dane [DeHaan] at a poker game at my house,” recalls Baena. “I’m in awe of his talent as a dramatic actor and I knew I needed someone who had more dramatic and comedic chops to ground the film and make it more emotionally believable. Luckily, he came on board.”

John C. Reilly and Molly Shannon play Beth’s parents, who sit shiva (Jewish mourning period) with DeHaan after Beth’s unexpected passing. “For some reason, I always saw John C. Reilly pulling off a Sydney Pollack-kind of Jewish guy even though he’s completely Irish,” says Baena. “He’s someone I’ve always loved. In fact, almost everyone in the cast is Irish except Paul Reiser. John joked with me that playing a Jew was the final frontier for him.” Adds Baena: “I’m so glad we got John for this movie. John pitched Molly to play his wife. They have a beautiful connection and she is another actress who can oscillate between comedy and drama at the drop of a hat. As for (the casting of) Paul Reiser, as a kid I always loved him in My Two Dads and as this bad guy Aliens and in this movie called Bye Bye Love. It was a lot of luck to get these actors and they responded to the script.” 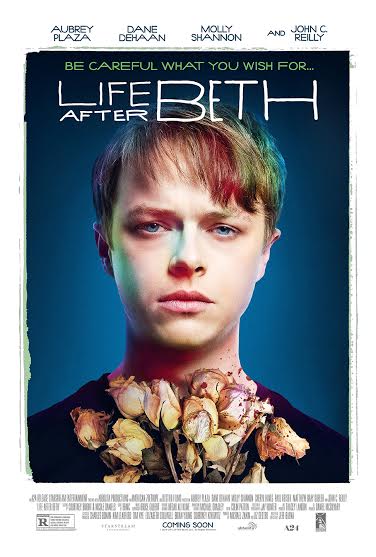 Baena co-wrote the 2004 cult classic and beloved indie flick I Heart Huckabees with David O. Russell. He prefers writing after midnight, at home, when there are not many distractions and “no noise, no light, no people. You’re able to focus. I wrote Life After Beth in a matter of weeks, but not every script is like that.” (Ironically, Baena recalls that Huckabees was written in his chiropractor’s waiting room. “I don’t know why! Even if we weren’t getting adjusted, there was just something really comforting about it.”) His advice for overcoming writer’s block is to just write down anything. “I never have writer’s block, but sometimes when I struggle with a scene I just write it out and don’t worry about the quality of it. I come back to it later instead of getting hung up on that one part. Some people get so hung up on making sure that one scene is perfect as they move along—and can’t move along until it’s perfect, they lose sight of their goal. But you can always come back to that scene and edit.”

Baena enjoys both writing solo, as he did with Life After Beth, and co-writing, as he did with I Heart Huckabees and other projects. “I like bouncing ideas off other people. When working with someone else, provided there’s a common goal and not a lot of ego involved, there’s a freeflow of information and a beautiful synergy can be created.”

“Writing by yourself allows you to explore things without having to articulate them; you can explore and not have to feel like it’s fully formed yet. It can form while you’re working on it. With someone else, you have to communicate what you’re going for and make sure you’re on the same page, literally, in order to make it work,” he says. “Sometimes it’s refreshing to work with someone else, and sometimes it’s exhilarating to work on your own. It depends on the project. If you find the right person to work with, it can be magical; wrong person it can be a nightmare. It cuts both ways.”

“Impractical Jokers: The Movie” Hits Theaters Nationwide and Canada with the Help of their Loyal Fans