A handful of historic towns in Texas Hill Country between Austin and San Antonio have reinvented themselves as upscale food, wine and culture destinations reminiscent of those found along the California coast between Santa Barbara and Napa and the villages of The Hamptons. Fredericksburg is the shining star among them, transcending its historic German underpinnings to the point where it’s drawing a more cosmopolitan group of visitors, including many from outside Texas—including business travelers looking for a classy big city alternative.

The transformation is the handiwork of several families and individuals claiming long-standing Fredericksburg roots. Their challenge is multifold, maintaining the integrity of Fredericksburg’s 19th century German underpinnings and old school fine art gallery scene while adding cosmopolitan and global zest to the landscape with its newer restaurants, bars, clothing boutiques, interior design emporiums (making up the “Warehouse” district a few blocks downtown) and rustic-chic boutique properties minutes off Main Street.

Chef Leslie Washburne is the matriarch of one of the families credited for pushing Fredericksburg beyond its status as a driving distance weekend retreat for Texas families. Although she had cultivated a reputation across the state for her vegetarian and vegan cooking and pop-up wine dinners in Dallas, she took a leap of faith when she purchasing a twelve-room 1840s Texas-German guesthouse from its previous owner around 2004. Although she figured it would be an ideal adjunct to the cooking school she had opened when she and husband Hugh moved to Fredericksburg, some family members and friends expressed concern. As she had no prior experience operating an inn or the kind of renovation required to bring out the best architectural aspects of the structure, she initially trusted her instincts. 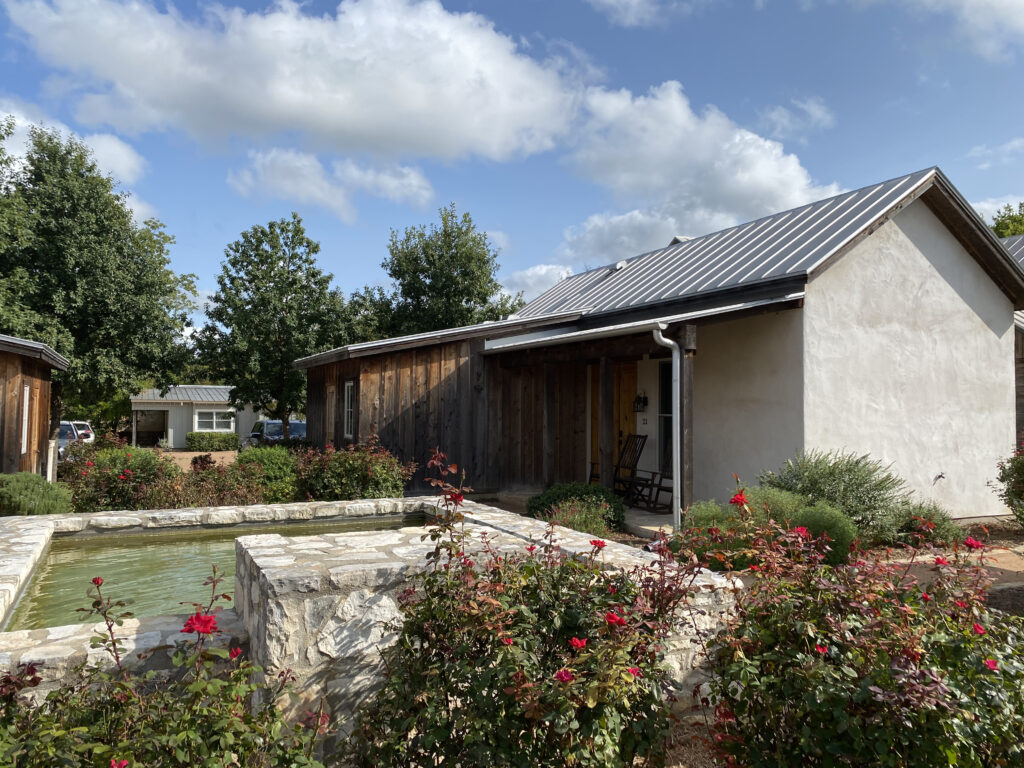 Since the first renovations and through subsequent additions, Leslie’s long term goal was to establish a pride of place that could be appreciated by visitors as well as those with familial ties to Fredericksburg, she, husband Hugh and daughter Sarah—with a lot of creativity and a little bit of trial and error—gave Hoffman Haus a new lease on life that’s raised local standards, as every lodging in downtown is independently owned and has historic underpinnings. Other inns comparable to Hoffman Haus which have risen up in phoenix-like fashion include the Ololo guest House and The Lodge Above Town Creek.

The now 23-room property is the perfect embodiment of Fredericksburg’s past and future—and a place perfectly suited for leisure, business and “bleisure” travel—thanks to Leslie’s attention to detail in both the renovations of the 19th century structures and creating continuity when pulling together the interiors of newer cabins and rooms. Different combinations of restored furnishings from different eras and locally crafted amenities (such as San Saba soaps and nubby hand-knit blanket throws) add a distinctive personality to each room.

“The Cottage,” the newest stand-alone suite, for example, is its own self-contained country retreat, from a porch area overlooking prairie-style landscaping to its vaulted ceiling, upholstered living room seating and an armoire converted into a butler’s pantry. The large bathroom adjoining the large bedroom, is the most luxe section, with two vanities, soaking tub and separate walk-in shower. Given that Hoffman Haus’ kitchen has earned a stellar reputation for catering high-end weddings and relaxed business retreats, the aromatic made-to-order in-room breakfast baskets are can’t miss. The living room in “The Cottage” or the porch is the perfect spot to enjoy the kitchen’s scones, quiche, muffins and whatever struck the fancy of the Washburne’s bakers that day.

Given the thought that’s gone into the accommodations to make them warm and calming, business meetings and retreats here are custom-planned for every client and event planner to ensure the stay is stimulating, focused and productive. Three indoor spaces and other public areas on the grounds can be mixed and matched to make every attendee feel at home regardless of he group’s size. The 1,200 square foot Great Hall can accommodate up to 80 people and features a stage for speakers and presentations. The adjoining Conservatory offers seating flexibility and space for up to 40 attendees. Corporate groups looking for a space for much smaller meetings can use the 800 square-foot Library, which can be closed off to the rest of the Great Hall area for added privacy.

Leslie’s son, John, and daughter-in-law, Evelyn, are building on what she’s accomplished through their revamp of the downtown dining scene, adding diversity and modernity. Their first project was bringing new life to Otto’s German Bistro in 2013 by bringing in chef Adam Yoho to develop refined menus that would appeal to long-time residents while reeling in visitors from larger cities with locally-sourced ingredients (many from couples their own age who found fresh ways to rethink Fredericksburg’s agricultural traditions) as well as cutting-edge cocktails and biodynamic and organic wines.

Tapping into that success, John and Evelyn took their paintbrushes and globally-inspired comfort food ideas to transform the bungalow next door into Tubby’s Ice House. The menu not only includes burgers but also such creative items as loaded pulled pork fries and tacos with vegan, Indian vindaloo and Thai curry spins. They turned another bungalow on the other side of Otto’s into La Bergerie, a wine tasting room and fancy food shop where Texas wines can be tasted side by side in a flight with fine Italian and French selections (and Texas wines stand up to them quite well).

“I really see Fredericksburg becoming a small city because of how our population has grown,” says John on a break from the breakfast rush back in September. “Although the German language is no longer being spoken and a little bit of the original culture has faded in some ways, there is a pioneer spirit and work ethic. Some of our neighbors have 9-to-5 jobs and then raise cattle or run a farm in their spare time. While (many creative people are) getting priced out of bigger cities, but here they can afford to pursue dreams, and it raises the bar for all of our businesses, including restaurants. Success breeds success.”

Other Fredericksburg highlights on and around Main Street include Bejas, known for its fresh modern Mexican cuisine and margaritas, white tablecloth restaurant August E’s, which not only serves modern steakhouse dishes, but also a sushi menu (informed by the owners’ five years in Japan) and “Thai Tuesdays,” which has become a local institution. Das Peach House, on the edge of town, and its Fischer and Weiser shop on Main Street are treasure troves of jellies, jams, mustards, sauces and other condiments appealing to every type of home cook…and executive gift giver. Heath Sparkling Wines brings a splash of French culture into the heart of Texas through its small production of sparkling wines in the Méthode Champenoise. Four distinctive styles (Euphoria, Ebullience, Euphoria and the Adoration rosé) impress with a quality that’s on a par with many of the most recognized French labels. Heath adjoins the Grape Creek Winery and its always reliable Stout’s Trattoria, serving artisanal pizzas, sandwiches, share plates and wine tastings.

Author’s Note: While there remain many questions and concerns about the safety of travel domestically and abroad at press time, I hope this story will provide inspiration on how you can plan for interesting, enlightening and responsible journeys once circumstances allow for travel with confidence—such as increased availability of a vaccine or the dramatic slowing of new cases. In the meantime, be sure to regularly consult sites such as the U.S. State Department (state.gov), the Centers for Disease Control (cdc.gov) and the tourism offices and official government sites of your intended destination.

Why You Should Consider Acrylic Prints