It has been a year since I last met with James Murray and Melyssa Davies discussing their wedding engagement and the story of how they first fell in love.  It came to no surprise to me that given the unforeseen challenges in the world leading up to their wedding day, their love for one another continues to grow stronger.

Fun, fresh, happy and in love, best describes the relationship between Murray and Davies.  It is that kind of love story that everyone dreams to experience in their lifetime.  Sitting with the two, three days before their marriage vows officiated by best man and friend, Joe Gatto one of the four stars from “Impractical Jokers,” Murray and Davies describe what keeps their love so strong.

“We have a similar outlook on life.  We are spiritual partners.  Not necessarily with religion, but meaning the way we view life, the way we internalize things, and the way we express them externally,” Murray explains.

Davies adds, “we have the same love language in terms of how we love each other and receive that love.” 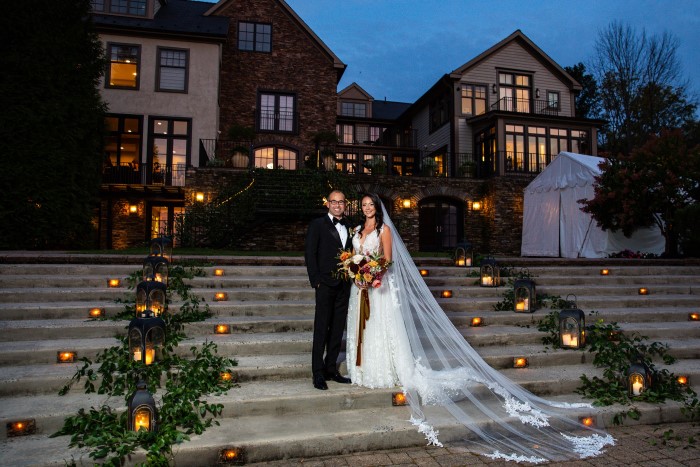 Whether it is having an impromptu date in a bubble dome or spending time with their adorable pooch, Penny, the simplicity of their love is fun and full of optimism.

While the two did not have a formal wedding registry, they thought it would be fun to make one on Amazon with fun gifts that they would not expect to receive.  One afternoon while Murray was at work filming, Davies decided to set up a surprise for Murray with a bubble dome that a friend had sent from the registry.

“It was huge and really heavy, so I had to drag it out on the tractor from our garage and find a flat space in our yard to set it up,” Davies recalls.

She decided to blow up the giant bubble dome where she was able to place a couch, table, wine and of course their favorite boardgame Scrabble.  Davies then messaged Murray to let him know they were having a date night together when he returned home.

Murray explains that with their relationship “everything feels like an adventure.”

With a solution driven mindset, when “Impractical Jokers” had to stop filming due to Covid-19, the guys teamed up with a new show, “Impractical Jokers Dinner Party” where they each film from their own homes at their dinner tables.  Behind Murray, there is a portrait of Davies as a regal queen.  When asked about the background behind the painting, Murray shares an incredible story of a birthday full of surprises for Davies.

Murray divulges the details leading up to the painting. “Melyssa’s birthday was on Friday the 13th of March and before everything shut down, I had planned the perfect day. We drove to her favorite restaurant “Nifty Fifty’s” a diner outside of Philadelphia and there was a booth just for us with balloons and a sign outside that read ‘Happy Birthday Melyssa.’  We then had her favorite lunch and afterwards drove to a location where I partnered with an escape room here in Princeton and redesigned the game to be specific to Melyssa.  I built an escape room from scratch with all the clues, the artwork, and the things on the tables based on Melyssa’s life.”

Davies enthusiastically adds, “he coordinated it with my friends to show up when we showed up.”

So what was in the final safe of the escape room?  In it were the keys to the jeep Murray had bought Davies a year prior, but he secretly had it painted pink with the jeep waiting for her outside when they exited.  Davies was completely ecstatic about the “new” jeep and personalized game.  Being an avid escape room fan, she wanted to stay and play another game, but Murray had other plans in store for her.  They drove back home where a surprise party was waiting for Davies with various artwork of her all over the walls of their home which included the portrait of Melyssa, the Queen!

“We always discussed having something on that wall and could never figure out what,” says Davies.  Needless to say, her queen portrait remains!

As the wedding date got closer, both worked on various scenarios for their September 25th wedding at the Lake House Inn in Bucks County, Pennsylvania.  Four different guest list scenarios were created due to the unknowns of Covid-19.  They had to settle on the guest list that included a quarter of their original size and their unique ‘View Master’ wedding invitations that included photos of the two were sent out to the guests.

Not having anxiety on factors they were not able to control, Davies explains, “we wanted the marriage and not so much the wedding.”

During our interview, Murray turns to Davies and whispers, “the only thing that matters is that you’re there.” 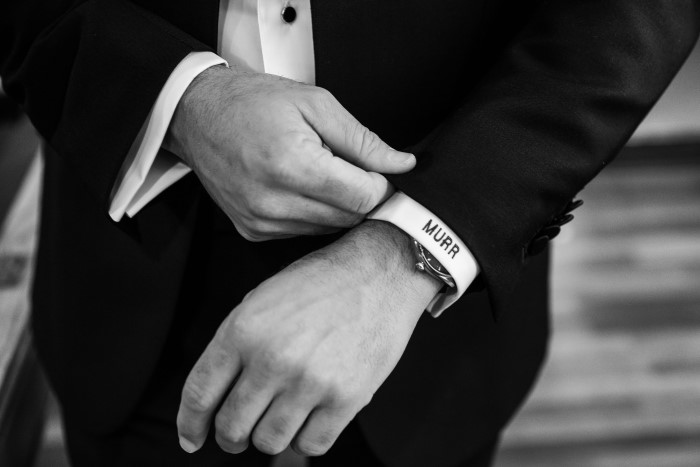 Staying true to their outgoing spirits, the theme of their wedding was “fall and fun.”  The wedding venue included a bouncy house, lawn games, ladder ball, corn hole and a giant Jenga.

Davies adds, “we are game people.”

Murray handsomely dressed in a Gucci tuxedo for their vows. 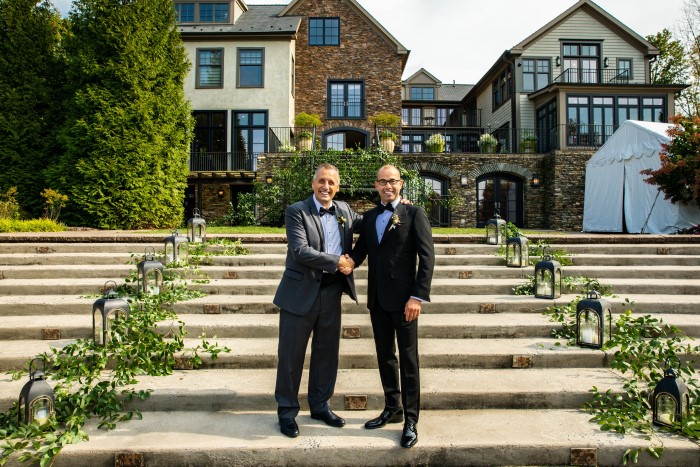 Davies found her wedding dress at the iconic Kleinfeld Bridal in New York and fell in love with the first dress she tried on.  Her stunning guipure lace sheath gown and cathedral length veil were both by designer Pnina Tornai.

“Trying on the dress, I just knew,” Davies shares. 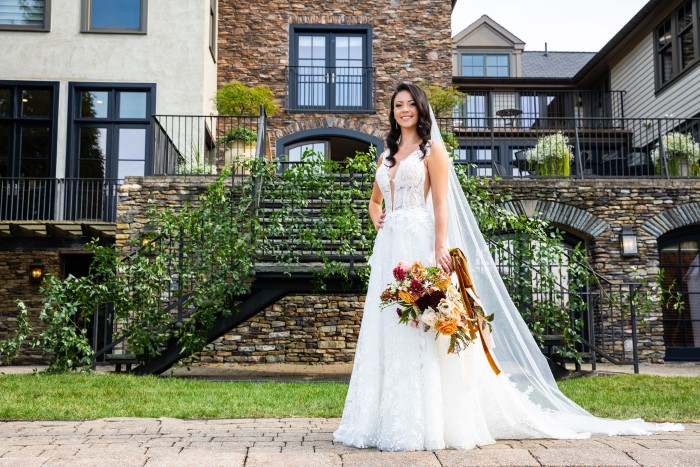 Family members joined the ceremony with Murray’s nieces as the flower girls and Davies’ younger brother Jackson walking her down the aisle.

Special surprises were planned for the guests including very unique centerpieces made from antique luggage with old fashioned wooden games found inside and a photo album of James and Melyssa’s honeymoon filled with photoshopped photos of various adventures around the world with the final picture of “happily ever after.” 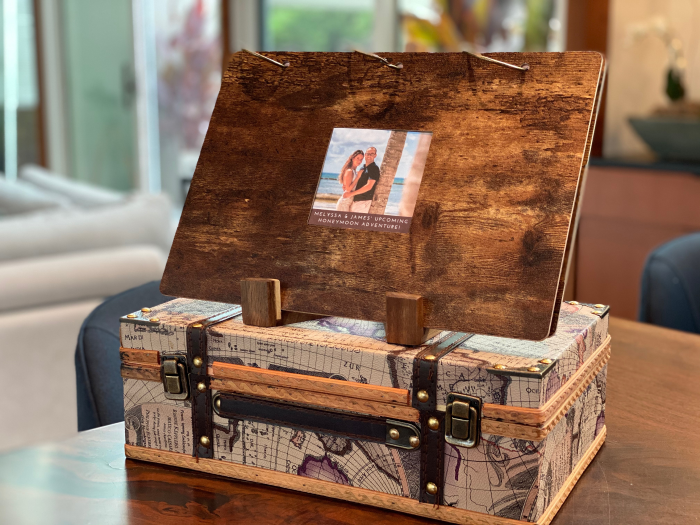 Murray had a very intimate and special surprise planned for Davies for their wedding song, “You and I” and first dance.  I am sure many heartfelt happy tears flowed during the dance.

Plans after the wedding include a two-week honeymoon at the Soneva Jani resort in Maldives.  Their room comes complete was a private slide sliding into the Arabian sea.  There will be a stop in Dubai on the way home for a romantic dinner in the desert.

Their adventures together are just beginning.  You will find Davies on an upcoming episode of “Impractical Jokers” where they use her career as a nurse against Murray.

“When you see what she does to me your opinion of her may change,” Murray laughs. 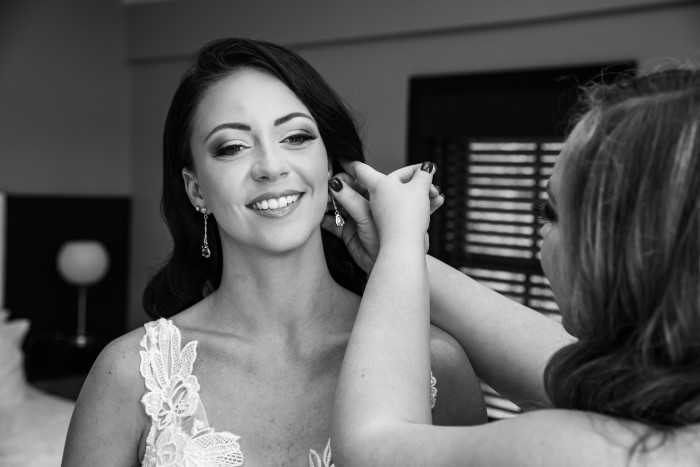 During quarantine, Davies began a new business adventure of her own called, “Without the Roots” where she designs handmade greenery pieces for your home.  Business has been growing and she is enjoying using her crafting skills.

No stranger to writing, Murray’s fourth book, the thriller “Don’t Move” cowritten with author Darren Wearmouth is set to release on October 20th.  In true Murray style, he and Wearmouth are hosting a unique virtual book launch party for their fans on the date of its release.

As a joint project, in the future Murray and Davies hope to start a non-profit charity for nursing homes assisting with the financial burden that residents face.

Family wise, Murray and Davies look forward to starting new traditions of their own adding to the 42-year apple picking tradition of the Murray family.

They plan on hosting Thanksgiving at their home and finding their own way of creating new memories with their loved ones.

The future is bright for Mr. and Mrs. James S. Murray.

A heartfelt congratulations to the newlyweds! 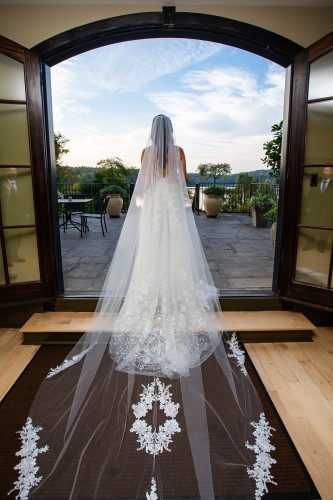 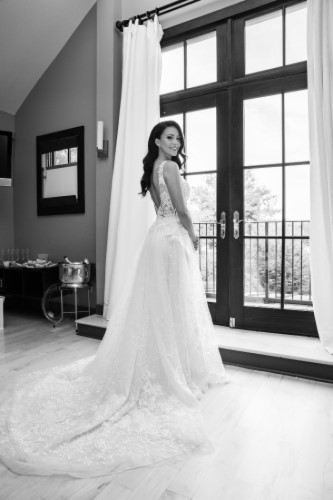 For more information on the virtual book launch party for “Don’t Move” go to: www.meetmurr.com.

For unique earrings designs such as Melyssa’s wedding earrings by Sea P Styles, go to www.etsy.com/shop/seapstyles.

THE LOS ANGELES TIMES FOOD BOWL INSIDE YOUR KITCHEN

Secret Room Dishes Out the Stars, Pizza, and Botox at the Pre-Emmy Gift Lounge in Hollywood