Millennium Magazine had the great pleasure of dining at Oreya last summer — the restaurant’s premier season. Lucky for us, it is returning in 2017. And if Millennium Magazine were doling out stars, we would give the “modern Mediterranean” restaurant anchoring Southampton’s trendy Capri Hotel, the maximum Michelin ranking. 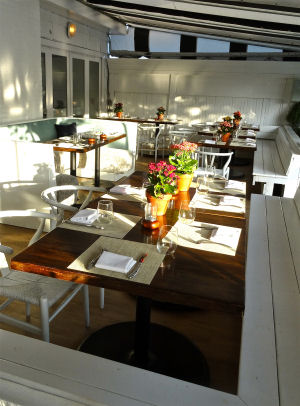 Yes, the culinary standard on the South Fork has been rising over the past few years, but few establishments have achieved the flavor and presentation heights of Oreya, a name that translates as “evil eye.” And the miracle of it is: Chef Greg Grossman is all of 23 years old. 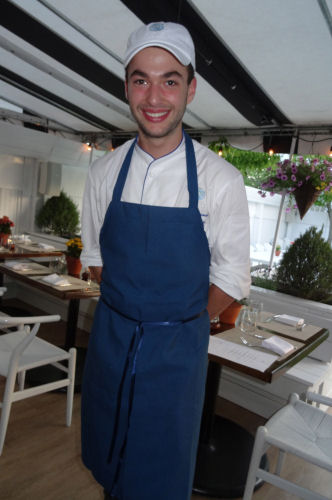 But Grossman, who attended the Ross School in East Hampton, has been making headlines since he was 13. At that tender age he was written up in the Chicago Tribune when he cooked alongside Grant Achatz of that city’s Alinea Restaurant. Here’s a quote: “At an age when most kids are just venturing beyond grilled cheese, Grossman is dabbling in dehydrated anchovy salt, Tawny Port jam and yogurt ice cream with black sesame.” And that was eight years ago; imagine how his talents have grown!

The ambience features a chic dining room that leads out to a beautifully appointed patio for al fresco dining and the atmosphere was given a sexy vibe by a singer and her accompanists playing cool jazz. At adjoining tables in the open-air lounge several European languages were being spoken that only added to the feeling that you had landed in Capri itself.

According to Oreya’s website, the menu draws inspiration from the “cuisines of Greece, the Riviera and Turkey,” yet Grossman renders a highly inventive take on traditional offerings. From the enlightened cocktail menu to the “Wow!” evoking deserts, it was a true culinary adventure – with one of our party proclaiming as dish after dish was served: “Now that’s a winner.” 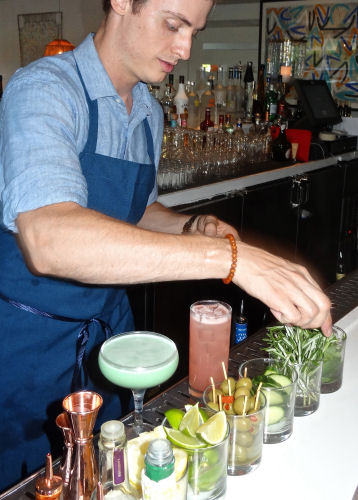 Pistachio being the predominant ingredient, we found the fragrant nut all over the menu from a pistachio orgeat (a syrup usually made from almonds, sugar, and rose water) in a grasshopper-green cocktail to a Hamachi Carpaccio, where the chewy nuggets were accompanied by Pioppini mushrooms and celery root, to a pistachio oil served with the Crispy Octopus.

Unusual ingredients are a signature of the establishment. Think: smoked steelhead trout roe, pomegranate molasses, kumquat, tempura white anchovies, apricot-chamomile, whipped saffron yogurt. We’ve used argan oil on our hair, but who knew it would be so good with a delightful Jasmine-Scented Salmon. 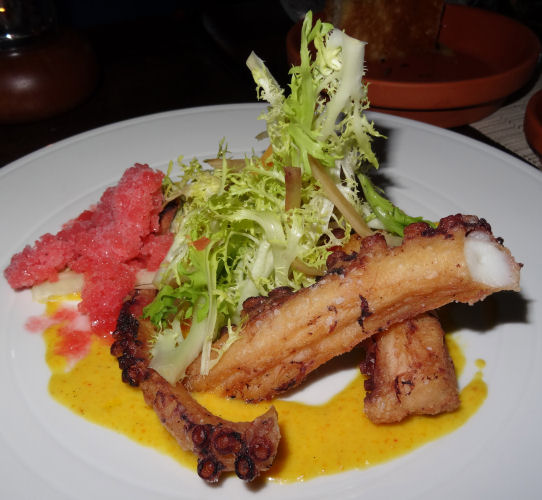 While we could enthuse breathlessly over our fare, we will save you the superlatives and share a few high points of our experience:

For his “ezme,” a Turkish dish, Grossman chops up heirloom tomatoes with herbs and mixes in black garlic “for earthiness.” Sublime. 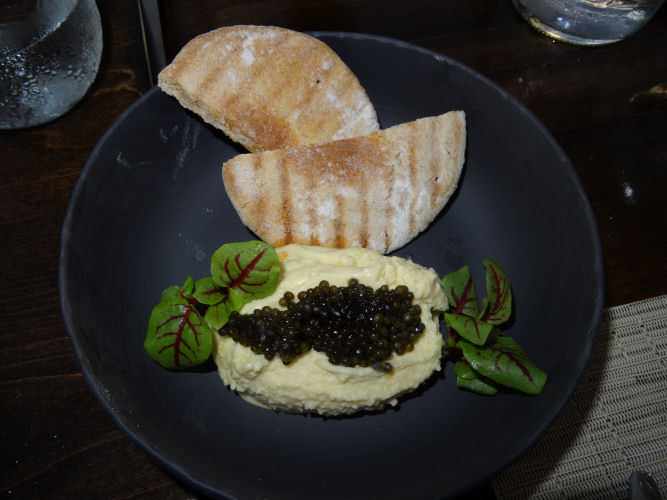 The “VIP Taramasalata” is a celestial take on the bland pink glop you get in every Greek restaurant. Frothy and complex, the smoky grey mullet roe is topped with golden oscietra caviar, offset with orange gelée and scooped up with toasted house-baked pita.

Green Hummus: again an innovative expression of the usual dish. In this case the chef takes fresh shelled Oregon chickpeas, hence the “green,” and slowly cooks them before adding a pastiche of spices and a pistachio tuille. 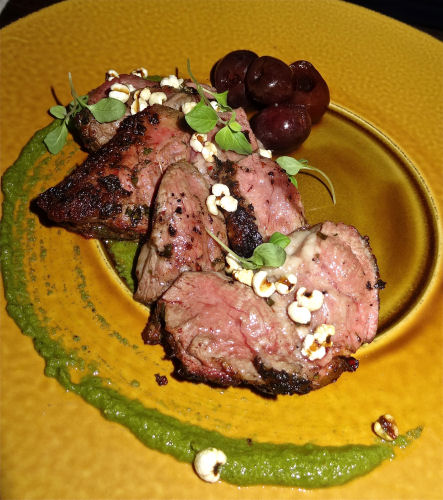 The baby watercress salad had just the right balance of acid in the vinaigrette, and charmed us further with its dose of labneh (a creamy cheese even better than Greek yogurt).

We could go on, but we suggest you run, don’t walk, to Oreya to see and taste for yourself.

0
Millennium Magazine July 5, 2017
No Comments Yet