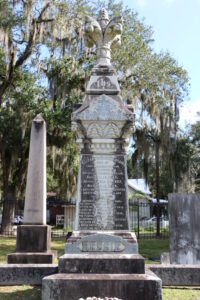 Located within the Florida panhandle, encompassed by mysterious {yet boo-tiful} ancient oak trees lies Tallahassee, Fla., a historical destination aptly named as one of Southern Living’s top 10 Cities of the South. Nestled in Tallahassee’s oldest public cemetery, the grave of Elizabeth “Bessie” Budd-Graham is a unique memorial for a woman some believe was a kind “white witch.” Bessie’s tombstone – a towering ornate obelisk which happens to be the most visited grave in the entire cemetery – has a strange epitaph chiseled on the front (which historians have translated to have many dark, witch references throughout). While some have claimed Bessie was a “good witch,” others are not so sure when they feel the energy that they attribute to the grave itself. Take a self-guided walking tour when you visit The Old City Cemetery and see for yourself whether or not you feel anything when you visit the presumed witch’s grave. 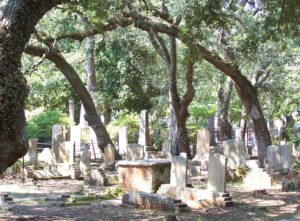 Nestled in the Southern Outer Banks and home to the third oldest town in the state, North Carolina’s Crystal Coast is encompassed in thrilling maritime history – from legendary tales of swashbuckling pirate adventures and sunken shipwrecks to tours of spooky burial grounds and ghoulish graveyards. As the crisp coastal air sets in, it’s the perfect backdrop to hear chilling stories and heart-pounding tales, like the 300-year history of Blackbeard the pirate and his infamous ship, “Queen Amy’s Revenge,” during the Beaufort Ghost Walk. For those who want a more hands-on experience, dive into the “Graveyard of the Atlantic” – which has claimed over 5,000 ships since the 1500s – just off the coast to see historic shipwrecks and sunken treasure. 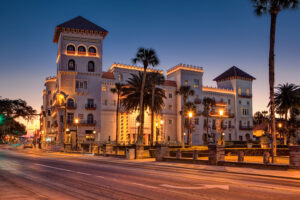 With over four centuries of storied history and known for being “America’s oldest city,” St. Augustine’s past is filled with ghoulish tales on every corner. Tourists can experience an actual paranormal investigation in the Old Jail (built in 1891 by the same company that would later build Alcatraz) after dark or visit the creepy dungeons of Castillo de San Marcos – the historic 17th century fort where the unexplainable can be witnessed even to this day. After a haunting evening, retreat to the cozy (and ghost free!) Casa Monica Resort & Spa to end the night – shining through with impressive fortress-like architecture as it majestically overlooks the downtown district and Matanzas Bay. 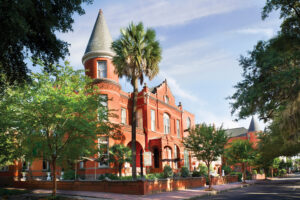 The Hostess City, known for its quaint southern charm and remarkable hospitality, is also known as America’s most haunted city and has quite a few mysterious ghost tales up its sleeve! Thrill-seekers around the world come to Savannah to catch a glimpse of paranormal activity. The decadently stylish Mansion on Forsyth Park, a Romanesque gem, complete with a tower and gothic arched entranceway, was finished in 2005. However, the building itself has had a presence in Forsyth Park for twelve decades. The location of the hotel’s iconic restaurant, 700 Drayton, once served as Savannah’s finest mortuary, hosting funerals of notorious Savannahians. Savannah is the go-to for ghost tours a plenty – from Hearse Ghost Tours to True Crime Pub Crawls. 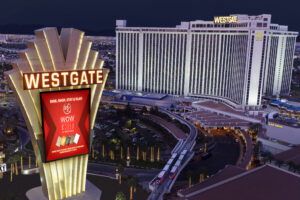 According to past guests, the ghost of Elvis haunts the halls of Westgate Las Vegas Resort & Casino. “The King” has allegedly been spotted roaming the hallways on the upper floors near the 5,000-square-foot “Elvis Suite” as well as on the casino floor and backstage at the International Theater, where he performed over 800 shows between 1969 and 1976. Even Las Vegas performer Wayne Newton spotted the ghost of Elvis peering down at him from a balcony as he performed in the same theater. Fast forward to today, the legendary Barry Manilow entertains sold-out crowds in the same venue. After ghost hunting, guests can relax under luxury cabanas by the pool, or indulge in fine dining at the award-winning Edge Steakhouse. At Westgate Las Vegas Resort & Casino, guests can experience affordability and luxury with the property’s rich history, star-studded entertainment and variety of amenities.

0
Millennium Magazine October 6, 2021
No Comments Yet