If ever I were to fall in love with a Gangster it would be Cheech in Bullets over Broadway.  No sugar daddy but a man of surprising intellect and definite principles – even ready to kill in the name of art – or in this case, show business. Played by Nick Cordero he’s sleek but never slimy, earthy and direct with his finger on the pulse and a knack for dialog – not to mention dance.

You have to admire a man who puts art before authority so when Cheech defiantly proclaims he goes his own way in life, singing “Taint nobody’s biz-ness…” and leading his henchman in a sizzling tap routine, he stops the show with a number that’s brilliantly conceived as a Runyon-esque tribute to the New York of the 1920s.  Bullets tells the story of a nebbishy aspiring playwright David SHayne (played by Zach Braff with earnestness and fervor not to mention fluid dance moves) who finally hits the big time with the backing of a mobster (Vincent Pastore aka “Big Pussy” from The Sopranos) who sees the play as a showcase for his kewpie doll girlfriend Olive (ditzily played by Heléne York); you could call Olive a no talent wonder but she’s mesmerizing in her missteps. But the plot thickens – a lack of talent is not limited to Olive, it plagues the playwright too. Cheech steps in and becomes the fixer – an unexpectedly skillful writer, he finds himself dedicated to improving the show and let’s just say, streamlining its cast.

This tale that Woody Allen told with whimsical and wry wit in the 1994 movie is now on Broadway at the St. James Theatre. Hands-on in transitioning his film to Broadway (apparently truly enjoying the collaborative effort), Woody’s partner in crime so to speak is the always inventive yet equally authentically-minded five time Tony Award winning director/ choreographer Susan Stroman (Millennium interviewed her for her previous show, Big Fish, in the  December issue.) With sets by long time Woody Allen scenic designer Santo Loquasto, the art deco glamour of the Roaring 20s lavishly contrasts with the grittier side of life before the crash in 1929, the cramped quarters and dingy views of our playwright’s pre-Broadway home.

Glittering and gorgeous chorus girls, a staple of the Broadway scene in Prohibition era New York, dance their way through Bullets over Broadway in costumes by William Ivey Long (12 time Tony nominee and a longstanding collaborator of Susan Stroman’s.) With Olive as their fearless leader these Broadway Babies tap out tunes that made the 20s roar: “Let’s Misbehave”, “Up A Lazy River”, “Runnin’ Wild”, “Tiger Rag” and more pop tunes of the day.

When a Mobster’s gotta ask, “Gee Baby Ain’t I Good To You?” you can tell he’s a guy who’s a goner when it comes to his doll.  From the opening number of chorines saucily whipping their tiger tails the show runs wild re-imagining Broadway clichés with such over the top flair it’s impossible to resist. Like icy cold champagne Bullets is frothy and delicious, a guilty pleasure from start to finish…just wish Cheech wasn’t finished off, I loved his style.

Bullets over Broadway is at The St. James Theatre. Tickets available at www.bulletsoverbroadway.com 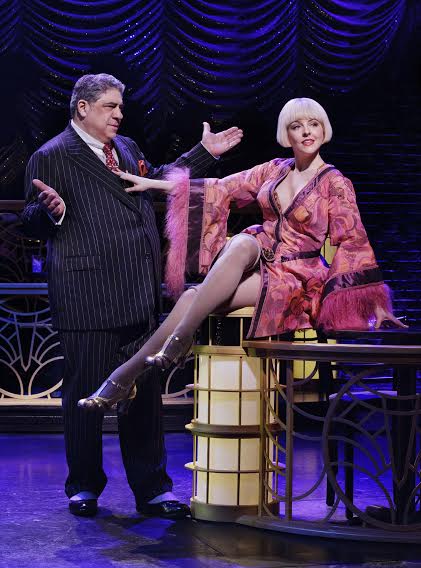 Ladies Who Lunch for a Good Cause

MUCH ADO ABOUT NOTHING – SEXY, WITTY, TOUGH AND TENDER

0
Millennium Magazine July 2, 2014
No Comments Yet