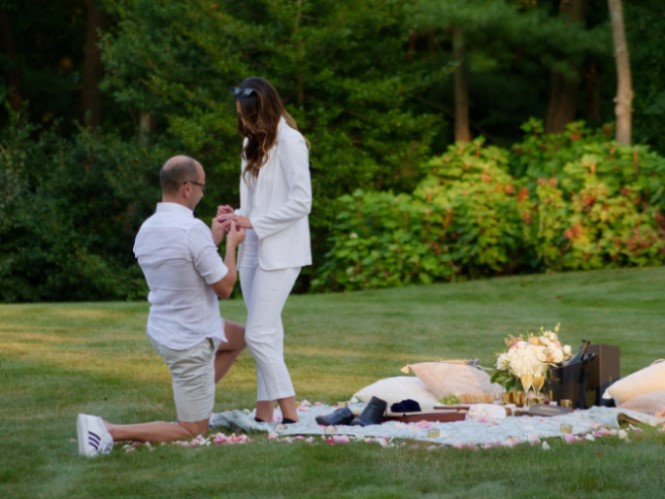 True love is real. For James Murray—an actor from the hidden camera series, ‘Impractical Jokers’—the publication of his best-selling novel, ‘Awakened,’ would lead him to that truth when he bent a knee to propose to the love of his life on August 30, 2019.

James Murray officially announced his engagement to his belle, Melyssa Davies, on social media by posting a photo of him holding Davies’ hand, which was adorned with a stunning Tiffany diamond ring. The photo’s caption simply read, “Best day of my life.” 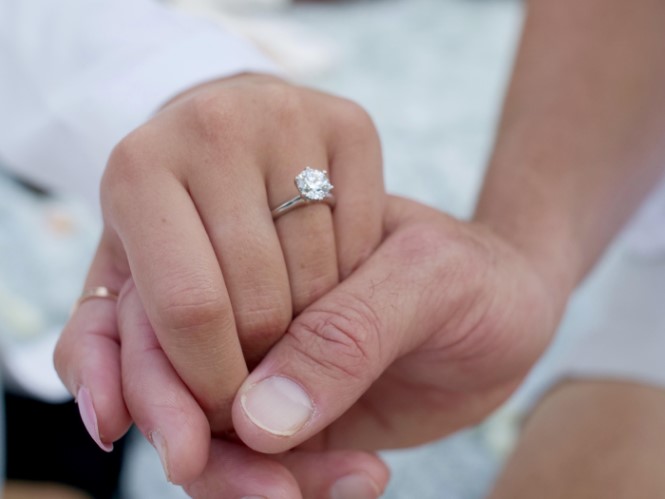 I met with James and Melyssa to discuss their months leading up to their engagement. In discussing that time with them, I was completely captivated by the depths of their love and their understanding of each other. In fact, while we conversed, I was overwhelmed with romanticism myself!

The journey to Murray’s and Davies’ fateful day of bliss began with the ‘Awakened’ launch party held in New York City in June 2018. Davies attended the event, met Murray and struck up a conversation with him, during which it became evident that there was a special connection between them. He offered his number and asked her to please stay in touch with him if she’d like. When Murray returned to his apartment that evening with friends, Davies still lingered on his mind.

Murray recalls asking his friends, “Did you see that girl I was talking to tonight? Oh my God, she was gorgeous. We totally hit it off!”

3 months would pass before Murray heard from Davies again.  Murray smiled as he remarked, “Thank God I saw her message!”

After Murray and Davies got to know one another, they went on their first date to Murray’s favorite restaurant, Buddakan, in New York. After thoroughly enjoying themselves, their date continued as they went out for some drinks. It ended with a simple kiss and a “goodnight.”

Murray and Davies were enjoying each other’s company—they continued courting through Christmas, after which they discovered they were falling for one another.

Murray, for his own part, realized he was falling in love with Davies during their first vacation together in February. He was somewhat accustomed to ending relationships during vacations in the past—this made him realize Davies was exceptional. 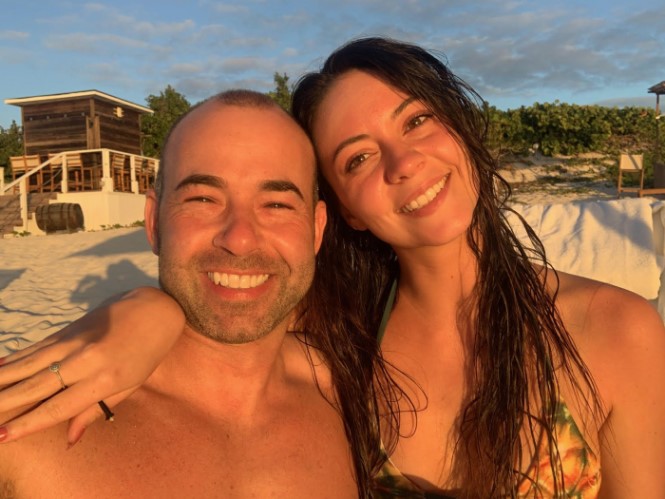 Murray explained it like this, “So vacationing is not a date anymore. Now it’s the 2 of you, together 24 hours for 4 or 5 days. We were on vacation for a few days already. It’s midnight. We were at the most fantastic resort I ever stayed at in my life. And for a 5-day trip, I used to feel like I had to entertain and always make sure someone was having a good time. It’s Saturday night of our vacation and we’re playing Scrabble at midnight, by ourselves.”

As Murray continued with his explanation, Davies lovingly stared at Murray with a soft smile—she was evidently reliving the moment with him.

Murray continued, “And we’re there playing in silence for an hour. She’s beating my ass, as she always does. To this day, I’ve only won 1 game of Scrabble against her. And I looked up, and we’re in silence for an hour, and she looked gorgeous. I was like, ‘I’m sitting here in silence, feeling no pressure to entertain and doing anything other than be myself. And I’m so damn happy.’ And that was the night I told her I loved her. And that was it. That’s how I knew. That night, I just felt like myself for the first time in my life. I felt like there was no pressure to do anything, to go anywhere, or go out dancing and drinking. I was just there with her, and it was so perfect, easy and comfortable. It was the first time I’ve ever felt like myself in a relationship.”

Murray and Davies both describe their relationship as easygoing. 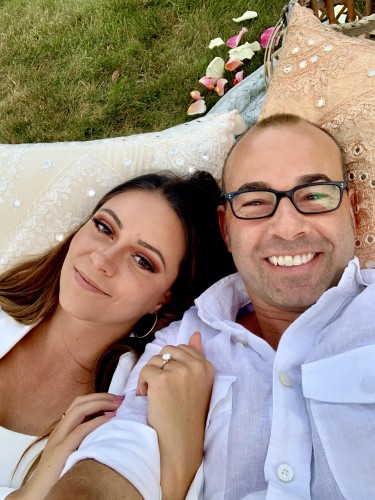 Every Impractical Jokers fan knows how important Murray’s blue blanket, which he has slept with every night since he was a child is to him.

When asked whether he introduced Davies to the blanket, Murray recalled stepping out of his bathroom one evening to find Davies cuddling with it.

“So, the joke now is that I’ve got my blankie on my left, boo on my right, and Duke laying all over both of us because he’s a big dog,” Murray said with a laugh.

Duke is Davies’ dog. He’ll be moving in with her and Murray in due course to their new home in Princeton, NJ.

As my conversation with Murray and Davies continued, Murray looked over at Davies and said, “I say to you all the time, ‘Every single thing is better with you.’ Everything. Everything.”

Murray’s friends (Sal, Joe and Q) and family are an integral part of his life. When Murray first introduced Davies to the other ‘Impractical Jokers’ members, they liked her instantly.

“On our first date, the guys met her and loved her. Later, during a punishment we were filming for the show, they cornered me. Melyssa and I were going on a date that night. And the 3 of them cornered me on set, pushed me into the corner nose-to-nose and said, ‘Don’t you screw this up.’”

Davies, who completed nursing school and is striving to work in the field of geriatric and hospice care, has a kind and generous spirit. Murray has experienced her selfless nature firsthand on multiple occasions. He shared one of his favorite memories of Davies.

“A year ago, Melyssa booked a trip to Europe with her best friends. And they were going away for 2 weeks to visit different countries. We were ‘full-swing’ dating at this point. And I was like, ‘Gosh! I have to go 2½ weeks without seeing her.’”

Murray continued, “I was on tour for those couple of weeks. My new book was about to come out. I was doing book signings and things like that. Melyssa clearly thought about what I would be feeling on which days. So, if she knew I had 2 shows that night or a book signing that day, and we’d been apart for a week already, she’d anticipate what I’d be feeling.”

Murray quickly stepped out of the room and returned with a handful of letters. Each one was numbered from ‘1’ to ’16.’

Murray gushed as he spoke. “Every single day that she was gone, she had a different gift for me to open on each day and a card attached. So, day number 1, day number 4… Every single one’s in here along with a gift for each day. 16 with gifts attached to each one, anticipating what I would be feeling on what day… and she nailed it. She knew when I was going to be stressed out because of work. She knew when I was going to be missing her more this day because of what’s going on in my own life. And things like that. Nobody does that. No one is that thoughtful. No one.”

Being ever so grateful for Davies’ unprecedented thoughtfulness, Murray made a grand gesture of his own by surprise visiting her while she was on vacation. With a little help from some of their friends, he was able to open a day in his hectic schedule, fly overnight to Nice, France, and surprise her on a private chartered yacht, just for them.

Davies remember the gesture like he made it yesterday. “It was so overwhelming. I was like, ‘How?’ I had so many questions. I was like, ‘How did you get here? You switched your schedule around? What on earth is going on?’”

Murray flew for 18 hours to spend 12 with Davies. 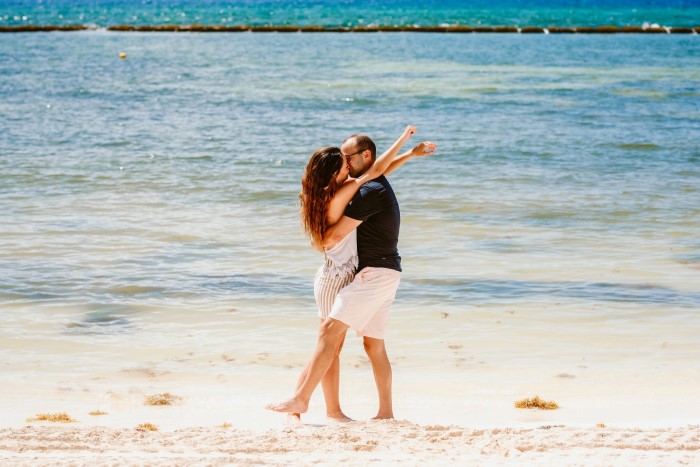 “It was worth every second,” Murray said. “I would do it again in a heartbeat. It was the best day!”

When it became clear that Murray and Davies were going to take the next big step in their relationship, they began searching for homes to live in together.  They fell in love with the first home they considered. Not soon after they purchased the home did Murray pop the question to Davies.

While the proposal was not as Murray originally planned (they had to cancel their vacation to Turks and Caicos because of the passage of a hurricane in the Caribbean), the gesture was just as romantic as all the months leading up to it.

Murray originally planned to propose with a video he spent months putting together with fans yelling, “Melyssa, will you marry me?” The video itself was quite impressive—with thousands of fans keeping it a secret being equally impressive!

Back in Princeton, a hidden photographer, picnic blanket, champagne, music and Scrabble board were all set on a beautiful sunny afternoon. Murray proposed, and with pure excitement and tears streaming down her face, Davies said “Yes!”

The Scrabble board with the question, “WILL YOU MARRY ME” spelled out is now proudly displayed on Murray’s wall. 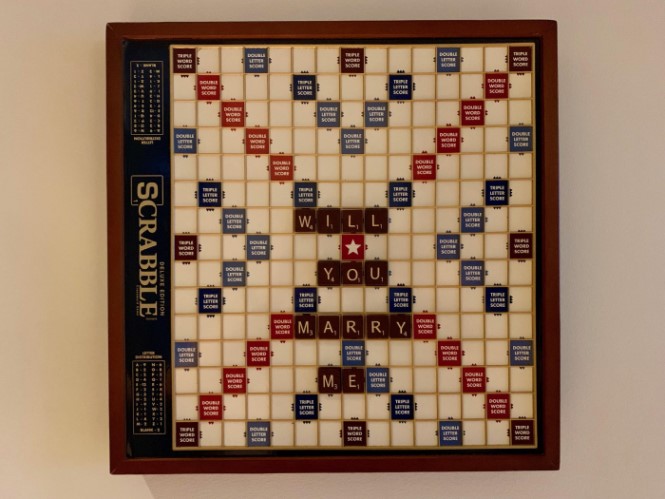 Murray and Davies are planning their wedding for Fall 2020. It will take place in Rhode Island.

To summarize their relationship, Davies says, “It’s refreshing. He (Murray) uses this word all the time. It’s so freeing, being in a relationship and being yourself where it’s flowing so naturally and it just going where you both want it to go. It’s amazing. It’s freeing. It is.”

Congratulations, James and Melyssa! Fairy tales do exist, after all! 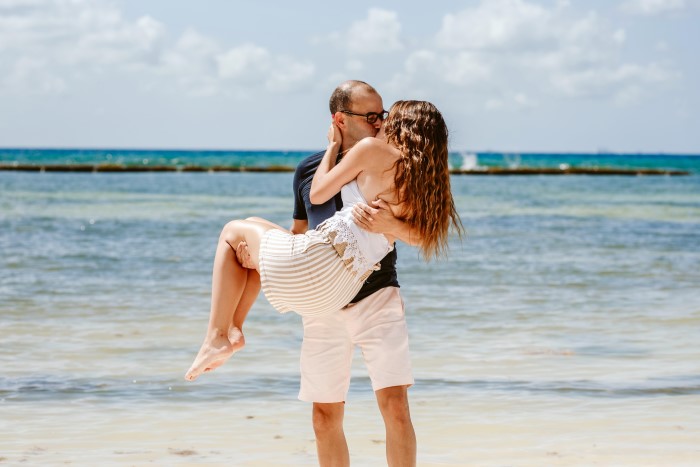 ICE-T: Reflections On A Life Of Lessons Learned